Vic Toews and the Hidden Hand 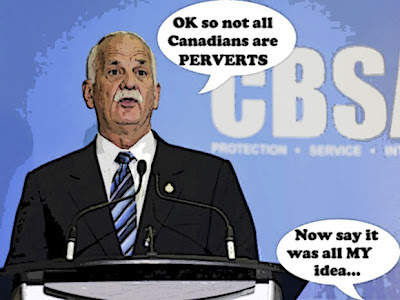 I've greatly enjoyed the humbling of Vic Toews, for I've never had any respect for that sinister totalitarian, religious bigot, and ghastly hypocrite.

And I completely agree with this.

Canadians expect better. I call on Mr. Toews to step down as Minister of Public Safety.

The buck stops with the Prime Minister. He must hold his cabinet members to account.

Toews must pay the price for introducing such a foul bill, smearing his opponents as supporters of child pornography, only to admit he didn't even understand what was in the legislation. It's called ministerial responsibility.

But here's my problem eh? By focusing entirely on Toews we are allowing the hidden hand, the shadowy operatives in the PMO, and their dark leader Stephen Harper, to get away with murder.

The ones who supervise all bills, approve the final version down to the last comma, give them Orwellian titles. And compel their ministers to parrot the party line.

To understand their motives you should read this detailed report on the effects of similar legislation in the United States and Britain. (PDF)

And one of its main conclusions:

Surreptitious government-mandated surveillance is damaging to civil liberties. The fear of being watched “can result in self-censorship... (the) “surveillance of normal, everyday activities can lead one to be distracted and feel inhibited...”  and “threatens not only to chill the expression of eccentric individuality, but also, gradually, to dampen the force of our aspirations to it.”

Which helps explain why Vic Toews couldn't understand his own bill. Because it has nothing to do with fighting child pornography, and everything to do with intimidating the democratic opposition. By making us feel we are being watched, even when we're not.

Now ask yourself who is the control freak who requires that Con MP's clear even a speech to a Kiwanis Club with the PMO? Who is terrorizing the civil service and muzzling scientists?  Who hates a free internet he can't control? Who loves absolute power, and likes to see fear in the eyes of others?

And I think you'll agree with me. Vic Toews should resign.

The bill should be killed.

Any surveillance law that is overbroad, facilitates overzealous enforcement of minor laws, and damages the free speech, search protections, and freedoms of association that are the lifeblood of a democracy is no law that a responsible citizenry could ever be expected to authorize or legislate of its own will. Any law that is so damaging to the fabric of a democracy must be either modified extensively or withdrawn.

And for the sake of our democracy.

The hidden hand must be exposed... 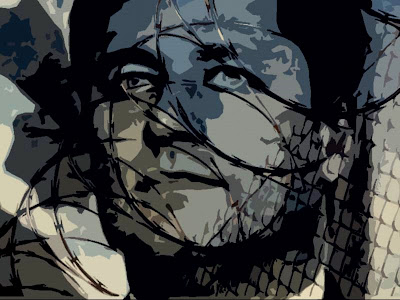 I can't disagree with a single word you've written here, but unfortunately this is a government that sees any admission of wrong or any willingness to consider alternative points of view as weakness.

Until the people of Canada rouse themselves from their self-induced torpor, expect more of the same from these people.

We can demand that Vic Toews resign. However, there is one other person who should be resigning.

hi Lorne... I am under no illusions that this government will ever admit they did anything wrong. Which is why I am so worried about the future of this bill. Rather than admit that the bill is not needed, so it should be killed, they will try to pretend it just needs a little tinkering, and we could end up with the same painted pig. No other government has used fear as an instrument of power like the Harper gang has. And yes, as you point out, the only way to guarantee our safety is to drive them from office...

hi Skinny Dipper...We absolutely must demand that Toews resign, but I would like to see an access to information search to try to figure out how this foul bill came together. For clearly Toews was left out of the loop, and I would love to know where the little foot steps lead.
Of course, Harper should fire Toews, but since Toews has the goods on him, he won't dare. And of course Toews always has an alibi. Just ask his former wife... ;)

I think we're going to end up being surveilled one way or another. Whether it's the Liberals or the Conservatives, or the government or the private sector, someone will be doing it to us. Many of my friends think I'm mad, because I've been expecting this for some two decades now.

In that regard, you'll notice the timing of this bill, within the first year of their mandate. The ISPs will have 18 months to install the surveillance gear. This means that, by the end of this government's mandate, the surveillance infrastructure will have been installed and operational for about a year. It's almost a given that the Harper Conservatives will use this surveillance system to help keep themselves in power.

Even if that effort fails, and the Harper Conservatives are decisively beaten (like Mulroney/Campbell) do you honestly think that the next government is going to order this system dismantled? Not on your life! Rather, they're going to use it themselves.

What virtually NO ONE seems to be thinking about is about Plan "B" -- in other words what do do once this surveillance system is installed and operational. By all means, attempt to defeat it politically, but don't put all your eggs in one basket. Maybe I'm just misreading things, but it appears to me that ALL the parties, NDP included, seem to be of the opinion that something needs to be installed.

What I'm essentially saying here is that people better start learning to use the tools, techniques, and tactics used by people living in repressive regimes. If you know how to use the right tools, you can still preserve your privacy from the nascent surveillance state.

Other country's are now aware of Harper's muzzling, scientists and the media. They are also aware, of China's huge encroachment into Canada. China owns many company's in Canada. Harper is permitting China, to buy up the tar sands. They own mines. They have our mill industry, along with our raw logs. China is also bringing their own people to work their mines, tar sands and Chinese owned company's. China refuses to pay Canadian wages. They won't even pay, WCB to injured workers.

We must remember. Fadden of CSIS warned, of China's encroachment into Canada. We were also warned, if Harper gets a majority, we could kiss Canada good-bye. Well, our worst nightmares are coming true.

The person who should be resigning wears sweater vests during election campaigns.