Stephen Harper and the Napoleon Complex 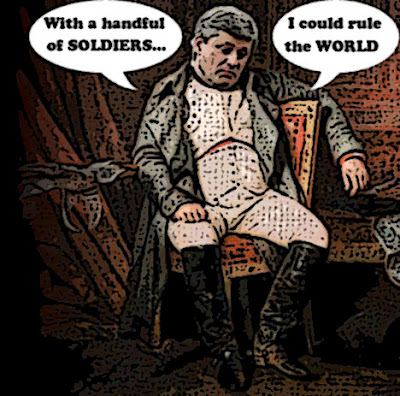 One of the things that worries me the most about Stephen Harper is the way he loves to play soldier, or Great Warrior Leader. One day he's Stalin, the next day he's Harpo of Kandahar, and the next moment he's Napoleon.

Because what else could explain this egomaniacal eruption?

“And history will record this: that it was the good work of Canada’s Armed Services – your work – working with our allies, that enabled the Libyan people to remove Gaddafi from power.

“Last week a NATO official told the world's press that Canada had indeed, and I quote, ‘punched above its weight’

“That’s what others say.

“This is what I say:

“Soldier for soldier, sailor for sailor, airman for airman, the Canadian Armed Forces are the best in the world.

“Congratulations, and on behalf of all of us, thank you and God bless all of you. God bless Canada.”

Jesus. Jesus. Gimme a break. I'm glad the degenerate tyrant was ousted, although that wasn't our mandate. And yes, I was cheering on the rebels all the way, because they're wildest bunch of freedom fighters I have ever seen.

But please.....raining bombs and missiles down on Gaddafi's forces was as easy as shooting fish in a barrel. So why is Harper puffing himself up like a blow fish, or a blimp? Trying to sound  like Winston Churchill David Cameron. And making us look RIDICULOUS.

Gawd. Even tiny DENMARK beat us? We're right up down there with ITALY? And he's making it sound like WE won the war?

Yes, yes, I know it's a well known fact that those who were nerds when they were young, like Harper was, often have warrior fantasies. Who among us doesn't know at least one little Napoleon?

But who can explain why he is quoting the hunchback Lichtenberg?????

"A handful of soldiers is always better than a mouthful of arguments."

Whom was Lichtenberg describing when he wrote, “Whenever he composes a critical review, I have been told he gets an enormous erection”? And of whom, you find yourself wondering, could it be true today? Hmm?

Because I can't help feeling that something horribly similar is at work here. If you know what I mean eh? Judging by his triumphalist speech, and his obvious state of arousal, I can only conclude that Nerd Harper likes playing soldier because it...um.... excites him. Praise the Lord and pass the Viagra !!!!

And to make matters worse, if that's possible, we're ALL going to pay for it.

I mean does anybody think that having our little Napoleon wander around the world making belligerent statements, and threatening to go it alone, and attack any country he feels like... with our tiny army... is going to make our country safer or make us more enemies?

And how many BILLIONS is he planning to spend on this twisted fantasy? Even as our economy is contracting, and he's preparing to slash social services. 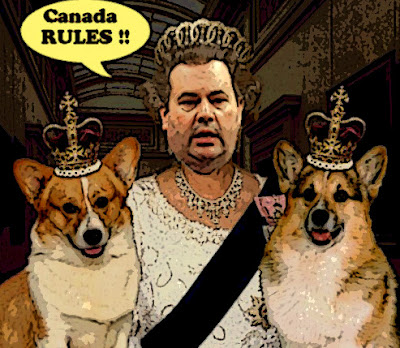 Once should do it for Harper.

When does Harper's exile happen?

hi Torontonian...I don't know, but when that happy day arrives I suggest we also sentence him to exile on the island of Saint Helena. Not only is it a miserable little place, but every day when he wakes up he'll be forced to think of how he treated Helena Guergis. Which, I think we can all agree, should be punishment enough... :)

"God bless Canada". Not only does Harper worm the word "god" in there all over the place but he once again apes US presidential language. Between "royal" and "god bless Canada" is there anything authentically Canadian that this PM embraces?

Libya rebel leader goes from US enemy to ally

"The rebels' Tripoli military commander, a former leader of an Islamic militant group that sent fighters to Iraq and Afghanistan, insisted Friday that the new Libya will shun extremism and won't become a breeding ground for terrorism."

"Abdel-Hakim al-Hasidi, the Libyan rebel leader, has said jihadists who fought against allied troops in Iraq are on the front lines of the battle against Muammar Gaddafi's regime. "

Yes, the rebels are Al-Qaeda, yes NATO is helping Al-Qaeda overthrow a soverign nation, and yes it's over oil: http://www.bloomberg.com/news/2011-03-16/european-union-not-panicked-about-loss-of-libyan-oil-envoy-says.html -- and his gold reserves.

Isit just me or does anyone else think that Harper is dying to have his own 9/11? Surely if enrage enough people there will one wingnut willing to oblige.

hi Jymn...I don't know what country Harper is trying to turn us into. But it's definitely a Banana Republic, it probably should be called Ruritania. And I don't want to live there...

hi Richard...thanks for the links. I hope you're wrong about the Al Qaeda part, but this NATO mission has clearly exceeded its mandate, and nobody can doubt that if the country didn't have oil, the west wouldn't have got involved..

hi Mark...no you're not alone. I believe Harper's belligerent foreign policy is endangering our country. And I believe he would use an attack on Canada as an excuse to turn us into a police state...

Hey Simon, don't know how much you know about Al-Qaeda so...

First off, ask yourself.. if our ministers see them as organized to meet with them: http://www.wsws.org/articles/2011/jul2011/cana-j06.shtml

Why don't they have a name? Read news reports from the last few months, the word 'rebels' appears no less than at least 6 times in each. This is an organization with commanders, bases, weapons shipments, but no name? Or is it that the media just didn't want to say what their name is?

Al-Qaeda is CIA created: http://www.theinsider.org/news/article.asp?id=0228 and are used by the western world to overthrow or destabilize nations. Al-Qaeda is actually Arabic for "Database". It is the name the CIA gave to it's database of "terrorists" and then to the terrorist groups themselves which are lead by the western world.

Therefore it is in fact a direct invasion by the western world of Libya that is occurring, not a "naturally developed rebellion" as our media is portraying.

And the top 10 lies our media told us about the Libyan government so that we would support their illegal terrorist lead invasion: http://blogs.reuters.com/great-debate/2011/08/22/top-ten-myths-about-the-libya-war/

10 years "fighting" the terrorists, and our defense minister is having meetings with them, after they "promise to be good".

The whole war on terror is and has been a lie, this *Arab Spring* is actually a western government destabilization plot to maintain their hold of the worlds last petroleum resources.

More info: http://www.youtube.com/watch?v=fZNvSX3A7pc [The truth and lies of 9/11 (Not so much about 9/11 as is on war on terror, presented by an Ex-LA police office of whom I know personally)]

So funny, so true! Napoleon aka Churchill aka Hardon for policy? hockey? troops? god? new glorious kingdom? I watched a Maggie Thatcher video recently where she commented on Desert Storm (Iraq I), her eyes light up with delicious excitement that I swear was quite kinky. Maybe that's why the old boys still love her. Have you seen this article? Fantastic about the In Hockey We Trust, Newt Gingrich, AstroTurf groups like the Kochs or paleoconservative movement (white nationalism).

The Canadian Manifesto 6: To Every Action There is a Reaction. Cough, Cough!
http://pushedleft.blogspot.com/2011/09/canadian-manifesto-6-to-every-action.html

Well, the sixth communications director for His Jekyllness. LoL