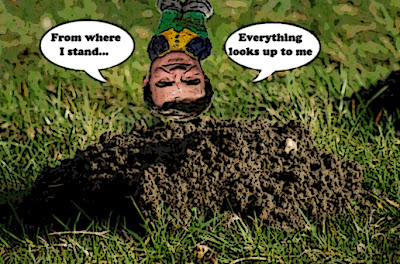 I'm proud to say I've never believed anything little Jimbo Flaherty, the one-time King of the Mole Hill, had to say about ANYTHING. But his recent behaviour leaves me wondering whether he's gone completely batty.

The stock market is tanking. The dollar is diving. Food prices are soaring. The IMF has just downgraded the Canadian economy.

So what is the nasty little Con gnome doing? Stubbornly insisting that slashing the deficit, lowering corporate taxes, and killing jobs is the best way to save the economy. While paying some fat cats $90,000 a day to draw up a list of those who must be thrown into the street.

The Finance Minister went on to quote some of the IMF’s more flattering adjectives, but then Bob Rae was up noting that the same report had suggested this country had some flexibility to deal with economic malaise. And now Mr. Flaherty was growling and snarling about Mr. Rae’s handling of the Ontario government in the early 1990s.

“What we would not do is run the Government of Canada like the member opposite ran the government of Ontario,” Mr. Flaherty declared. “He ran the province of Ontario into massive debt and deficits from which that province is still trying to recover.”

When in fact Rae was just trying to mitigate the effects of a brutal recession. And the guy who did the real damage to Ontario was Jimbo himself.

When as a member of Mike Harris' thug government he tried to kill government, just like Stephen Harper is trying to do, and ended up creating more poor and homeless people than that province had ever seen since the Dirty Thirties... 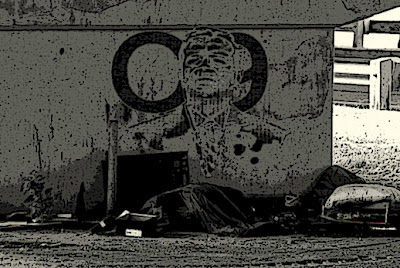 So many homeless people that Jimbo wanted to JAIL them.

Why do you think they are building all those prisons when the crime rate is going down? Answer: because the Cons know they are going to create so many poor people, there won't be enough shelters to hold them.

Oh boy. I wish I could jail all those cretins who voted for the Cons because they thought they were good money managers. The drooling brain damaged IDIOTS.

So what can we do about it? Take to the streets by the THOUSANDS and let those Cons know that we're not going to take their ideological nonsense. Before the price of food goes up so much, we're too weak to march eh?

Which is no doubt what the Cons are counting on. While they stuff their fat faces with caviar.

In the meantime, if you need a temporary boost, and you want to see the world like Batty Flaherty.

May I suggest you try looking at it like he does...

Because with these criminally incompetent  Cons in power.

We are going to need all the help we can get....

P.S. Please kids don't try this at home...without a helmet on...or you could end up as brain damaged as the ghastly Cons. Thanks.
Posted by Simon at 6:30 PM

Wasn't he the guy that had an ongoing battle with the poverty alliance in Toronto? I seem to recall the Harris goons (O.P.P.) marched on the group at Queen's Park. I also recall construction workers piling up their work boots at his CONstituency office in Whitby.I could be wrong. It all seemed so long ago and I'm awfully tired of this guy.

hi Mark...I don't know because I wasn't here back then. But because I care a lot about the homeless when I found out how he wanted to jail them it really stuck in my mind. As did the fact that the day he presented his first budget his special guest in Parliament was his good buddy the uber wingnut and ghastly homophobe Charles McVety. So naturally I wouldn't trust that nasty little garden gnome as far as I could toss him... ;)

Hi Simon. Here is a link to O.C.A.P. (Ontario Coallition Against Poverty). It makes a reference to Jimbo's office being ransacked by the group. This group suffered a lot under the boot heel of the Harris goons.Mark