The Kochtopus and a Lesson for Progressives 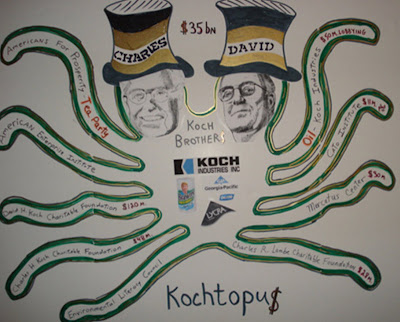 Charles and David Koch are two American billionaires who have contributed more than any others to just about every right-wing cause in the United States. From promoting climate change denial to funding the Tea Party.

They go to extraordinary lengths to keep their shadowy activities secret. But now we finally have one on them on tape comparing the 2012 election as the "Mother of All Wars" and Barack Obama to Saddam Hussein.

CHARLES KOCH: Ya know, usually in a business if there's something unpleasant to do or some guilt that somebody has to take, it's not the CEO, it's some poor guy or girl that had nothin' to do with it. It doesn't work [like that] at Koch Industries. I think it's the principle of market based [inaud]. It's dirty work that needs to be done, they assign it to me. So. [laughter] There you have it. I don't know why I came up with this theory. I must have been crazy.

But we've been talking about --- we have Saddam Hussein, this is the Mother of All Wars we've got in the next 18 months. For the life or death of this country. So, I'm not going to do this to put any pressure on anyone here, mind you. This is not pressure. But if this makes your heart feel glad and you want to be more forthcoming, then so be it.

And in case you think that the so-called Kochtopus is an American problem, there is a Canadian Connection.

And that's why our Cons love them so much. Or do you think that what is happening there isn't happen here?

You know sometimes when I look at our side, I can't help feeling that some of us believe we're in a pillow fight. When in fact we're fighting for the very survival of our way of life. And you don't bring a pillow to a gun fight, as the old saying goes.

Just like you don't  play into the hands of the Kochtopus by slamming unions.

Because if the Kochs had their way there would be no union rights. We'd be living in a right-wing jungle.

And you also don't plump for a nice guy wimp.

Mulcair may have his faults but being a brawler isn't one of them. And we need a leader, whoever he or she may be, who takes no prisoners.

Wakey wakey people. Smell the coffee...or the fish. This isn't a pillow fight it's an ideological WAR. The Kochs and the Cons are playing to win and so should we.

Unite the left, cut off the tentacles of the Kochtopus. Defeat the Cons and the right-wing conspiracy by whatever legal means necessary.

And of course, while you're doing it, don't forget to sing this song...

They are evil, but we have been weak.

The future is ours.

But if you leave it to someone who sticks to legal avenues (no matter how much of a "brawler" they are in that context, or how tenacious) the "conservatives" will still win.

Because they can break the rules with impunity.

We need to adapt our tactics to that reality.

One thing though: You notice how that self-serving Koch asshole claimed his was fighting for his country right? That's really how these lunatics think. They think that their self-evidently stupid, greedy, selfish crap is the heart and soul of their country.

It's what happens when you comfort your mental limitations with incoherent fairy-stories.

Like how Canuck right-wingers believe that we have to torture brown people to save Canada and we on the left think that torturing people will destroy Canada all on its own.

Which side is correct? Only a moron or a fool would have difficulty with that question.

hi thwap...I'm not endorsing Mulcair, I would personally prefer a woman, and I think I'm in love with Megan Leslie. ;)
But Mulcair should not be mocked for being a brawler since we really need some on our side, and the MSM has been doing their best to diminish him.
As for the porker Koch, I found the whole thing chilling. But an excellent example of how corrupted our economic and political systems have become. And my point is we need to know the enemy so we can become motivated to fight the. I find progressives in Canada have slipped from shock into depression after the last election. And while that's perfectly understandable, we need to get motivated again, and get back in the ring...