Thomas Mulcair and the NDP 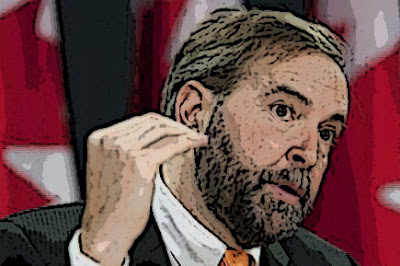 As I've said before I don't really want to discuss the NDP leadership race until all the candidates have declared, and I've heard what they have to say.

But since Brian Topp seems to be leaving the impression that The Force is with him because he's smart, which he is, and ...um...a good backroom boy.

Even though he's not elected, there's no guarantee he will be elected, and he's to put it politely, charismatically challenged. Zzzzzzzzzz.

And since Dr Dawg is touting Paul Dewar because he is a nice guy.

In an earlier post I noted Paul’s disarming debating skills—as in this video, wherein he easily bests Conservative pitbull John Baird, but with infectious good humour, not angry confrontation.

That’s the sort of thing that makes older Canadians wish they had a fine, well-mannered son like that. Paul’s style hearkens back to the civility that Canadians used to take for granted, inside the House of Commons and in everyday life.

Even though he's not bilingual. And we've all seen how nice guys fare with the Cons:

Hey Baird !!! Stop chewing on Dion's tongue, or hogging his liver, and pass me his private parts !!!!

I thought I could and probably should contribute a small measure of reality.

The Angus Reid Public Opinion poll released Friday shows that 28 per cent of Canadians would cast a ballot for the NDP if Mulcair (Outremont) were leader, with 52 per cent of Quebecers saying the same.

Twenty-five per cent of Canadians would vote for the NDP if it was led by veteran party strategist Brian Topp, with only 31 per cent of Quebecers on board.

Oh sure, I know it's only an online poll. But this too I know: Thomas Mulcair may have his flaws, but he is the best Parliamentary fighter I have ever seen... in both official languages.

I have seen him disembowl one Parti Quebecois cabinet minister after the other in the National Assembly, and serve him or her up steaming hot, with apples in their mouths. So who knows what tasty dish he could make of Stephen Harper and his Cons? Or what fine wine he might serve with that hog stew? Mmmmm...YUMMY.

The way I see it, since none of the progressive parties can do ANYTHING to stop the Cons from implementing their reactionary policies. Or as we say in Canadian, do fuck all about it eh?

The mission of any progressive leader, NDP or Liberal, man or woman, is to DESTROY the Cons up until the moment we can flush their soggy remains down the toilet.

Anything else is just a delusion. Anti-Quebec feeling is already poisoning this country, it should not cloud our judgement.

The NDP doesn't need another saint. It already has one.

It needs a fighter who doesn't take prisoners...
Posted by Simon at 8:17 PM

I do hope that both Mulcair and Dewar enter the leadership race. While Brian Topp may gain support from oldtimers like Ed Broadbent and Roy Romanow, I do think that Mulcair and Dewar will be able to attract new members to the party. Mulcair will likely get a lot of support from the few Quebec NDP members. He will likely be able to get new members from Quebec and other parts of Canada to join the party. Dewar could gain success from English Canadians outside Quebec. If he improves his French in the long run and creates a strong Quebec team, he may hold the NDP's place in Quebec.

I do want a future NDP leader to have the ability to pursuade Canadians and not just parrot their points of view. If Thomas Mulcair really wants the NDP leadership, he will need to fight for it. I think he is able to do this. Paul Dewar does have the intelligence to become the next NDP leader. Will he possess the street smarts to be able to take on Stephen Harper?

No question about that. YES he should enter the race for NDP leader. If he wins, the future suddenly looks a lot brighter.

hi Skinny Dipper...I agree with all you say. I want the NDP contest to be as open, inclusive, clean, and as spirited as possible.
I believe the NDP has an amazing list of Canadians to draw upon, and all of them like Dewar, are absolutely decent people. So I'll wait to see who comes forward before I decide who I like. But since I felt some party members, and the Con media, were ganging up on Mulcair, I thought I should stick up for the guy...

Hi B.C. Mary...I saw Mulcair on the news tonight, grilling the Cons about their neverending G20 Porky Action Plan scandal, and I must say he looked REALLY good. As I explained to Skinny Dipper I'm going to wait until I see who all the candidates are before I make up my mind.
But if the election was tomorrow, he'd get my vote...