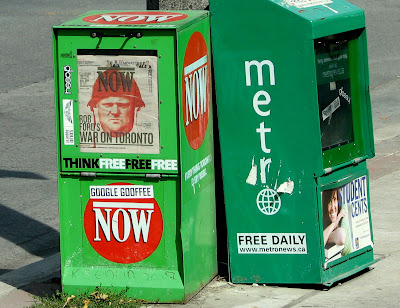 His ghastly face stares out from newspaper boxes all over the city, like Big Bubbah. The message couldn't be clearer, or more urgent.

Rob Ford has declared war on us. Now we must declare war on him, and the City Council stooges who are helping him destroy Toronto.

On our divided council, the mayor can count on roughly 19 votes guided by the thumbs-up or thumbs-down gesture of his henchman, Giorgio Mammoliti. The battered left can reliably muster 15, which leaves 10 votes gently blowing in the wind, the so-called mushy middle who showed a willingness to climb on the Ford bandwagon when the band was still playing.

But maybe now, as the proof of the Fords’ big lies becomes apparent, those in the centre might choose a long-term political career over sinking with the rapidly discredited Ford ship of state.

It's time those stooges learned a brutal lesson. Like the Con teabagger Tim Hudak did.

When you dance with the Fordzilla... 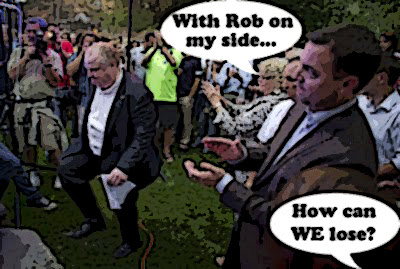 “I don’t think anyone wants an endorsement from Ford at this point,” said Nelson Wiseman, professor of politics at the University of Toronto. “Ford Nation has become a little rump about the size of Gadhafi’s remaining forces.”

And there's even MORE good news eh? Nobody is hurting the Con brand in battleground Ontario more than Hudak and Ford.

And since Stephen Harper also danced with the Fordzilla

The prime minister said his government had cleaned up the “left-wing mess federally” and said he hoped to “complete the hat trick” by turning Ontario blue come the Oct. 6 provincial election, a comment that elicited applause from the crowd. 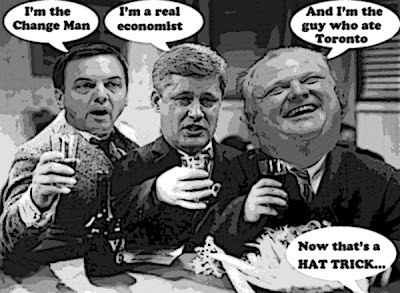 Golly. That IS a perfect hat trick. Now when we attack ONE of them, we attack them ALL.

Save some gravy for your goodbye party.

There goes blows the Con brand.

If Rob Ford wants a war.

hi Skinny Dipper... Definitely. Although that's even clearer in the Stooges clip I ran a couple of weeks ago. When Moe was dressed as a fascist dictator, and Curly ran away with the turkey... ;)

Montreal Simon wrote: "But maybe now, as the proof of the Fords’ big lies becomes apparent, those in the centre might choose a long-term political career over sinking with the rapidly discredited Ford ship of state."

Or maybe they will all decide to do their jobs, which is to represent the best interests of their constituents, not assess each decision on the basis of how it might affect the longevity of their political careers.

hi Lorne... I very much doubt that councillors who vote according to whether a ghastly character like Giorgio Mammoliti holds his thumb up or down, are capable of independent thought, let alone doing the right thing.
I mean think about it, Mammoliti's
thumb?
No, I think they are going to need a hundred thousand people surrounding City Hall, to gently persuade them they can do better...