The Sad Death of Jamey Rodemeyer 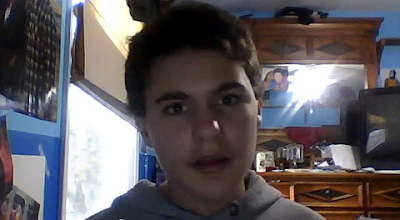 Jamey Rodemeyer was a 14-year-old boy who lived in Buffalo, New York. He was relentlessly bullied because he was gay. He cried out for help online for months.

And when nobody helped him he committed suicide.

On Sept. 8, he wrote: "No one in my school cares about preventing suicide, while you're the ones calling me [gay slur] and tearing me down."

On Saturday night, he posted a lyric from Lady Gaga's song "The Queen" on his Facebook page: "Don't forget me when I come crying to heaven's door."

Then around 1:30 a.m. Sunday, Jamey posted two final messages to his main public Tumblr blog. One said he really wanted to see his great-grandmother, who had recently died, and one offered thanks to Lady Gaga.

That was his last entry.

The ugliest part? His blog was full of anti-gay comments from his class mates urging him to kill himself.

JAMIE IS STUPID, GAY, FAT AND UGLY. HE MUST DIE !

I wouldn't care if you died. No one would. So just do it. It would make everyone WAY more happier !

The saddest part? About four months ago he posted a YouTube video telling other kids not to give up.

Promising them it does get better...

But it didn't get better for him.

And you can be sure it won't get better for many Canadian kids in a country where bullying is a national scandal.

As one of the few bloggers who writes regularly about bullying, I don't know why more Canadians don't understand that if you want to build a kinder, gentler world, you have to start with the children.

But I do know I'll never give up.

“Homophobia is a disease.
And bullying is EVIL.”

At the level of children I don’t know if you can call it truly evil as opposed to truly stupid/ignorant. I do know you can call homophobia a disease engendered by the biggest millstone hanging around humanity’s neck which is all of the three Abrahamic religions. Feel free to add other religions you feel have the global impact of the Abrahamic sects.

hi theo...yes I agree that the hairy barbaric Abrahamic religions are the cornerstones of homophobia. But as for our indifference to bullying it's a mixture of many things. Firstly we are an aging society, where young people are viewed as a threat. Why do you think the Cons are trying to justify their reactionary crime bill by claiming that "young people are out of control?" Secondly we are a violent culture that fetishizes a national sport where grown men beat themselves on the head until they are brain damaged morons, and crowds scream like hogs in heat, or spectators at a Roman gladiator fest. We are also the biggest fans of cage fighting in North America, which is roughly equivalent to the sheep head tugging contests they hold in Afghanistan. Just even more violent.
I also don't agree with you that some children aren't evil, because empathy is not something you learn in a book. There are some interesting studies where internet use is being linked to a decline in empathy and that goes for children and adults. How much empathy do you come across in the blogosphere. Answer: not much. It's all screaming, and shrieking, and flapping of gums. Thirdly, the fact is that too many teachers don't consider protecting children from bullies their job, because they are more concerned about their rest days and their fat pensions. And lastly, we are also a culture mired in denial and as provincial as you can get. We aren't even aware that in Europe and even the United States far more is being done to fight the problem than is being done here. In Britain anti-bullying PSAs are fairly common, while here they are non existent. I have never seen an anti-bullying ad in Canada have you? Yes it's easy to blame religion, and up to a point you are right, but really when you take a long look at the problem as I have, the monster is US...

Hi Simon,
I wasn’t inferring no child is evil. I am sure there are many. However, I also think it is the homophobia engendered by religion that provides the impetus for children to home in on that specific fact. Bullying, regardless of the reason, is abhorrent. As for anti-bullying ads, I have seen them but I can’t recall the origins.

hi Theo...yes you're right. I didn't mean to suggest that you didn't care about bullying. I just got a bit carried away in my reply to your comment. I also edited the post slightly this morning to remove the line where I made it sound like I was the only progressive blogger who cares about bullying. Sadness is sadness, but anger is blinding...

Everyone in my family was bullied when I was an immigrant growing up in Montreal. I remember being extremely negative, dark, depressed, and suicidal. As an adult, I do believe that people are born evil. From since birth, I have been sensitive to all people and animals and going vegetarian from a young age. Today I see clearly that bullies crave power and are sadistic. They bully everyone, not only immigrants and gays, but their own family members as well, and their spouses and children later. I am certain that those who bullied Jamey, bullied all types of other people. I use to take bullying personally, but today when someone bullies me, they reveal themselves as an ape or idiot to me. Anyone who has an issue with my colour, sex, or race, is an idiot. I have always believed that I would be treated better on earth if I were a dog. People love their pets despite their pets colour, breed or sex. Humans treat one another worst than their pets. A good deal of entitlement, superiority, territorialism, and sadism are within the bully personality, and I believe are inborn, and very much ape like, an inferior gene. I felt that watching Planet of the Apes, and the bullying that took place amongst the apes, made me realize how many humans still carry this ape gene. Humans show their love of bullying and aggression when they engage in watching sports and wrestling. I've come to accept that a majority of humans are still apes. Did you know that 70% of police and soldiers were bullies as children, they crave power over your life. This is why I have no respect for police and soldiers. It makes sense how callous and corrupt they can be, lacking in empathy, in general. Entire countries bully one another as well. The U.S. has long been considered a bully my many small countries, yet in most American movies, they portray themselves as heros. It's like, only I can see this lie. Slavery, theft of land, consuming most of the planet's resources, sweat shop labour, these are all forms of exploitation, possible only by a bully mentality, lack of empathy.
Any who is being bullied, open your eyes and realize you are dealing with an ape. It is the ape that needs to destroy himself, see if you can bring yourself to getting the ape to destroy himself so that he does not multiply. Don't take it personally, you are not the only one the bully is working on, believe me. Insulting the bully will probably shock him, you need to insult the bully with zero empathy, as he does with you. A bully is not an enemy, not someone on the defensive side. A bully is an evil entity, a demon, especially striking the nicest people on earth, working against God, and are triple worst as adults. I have 3 friends who are adult bullies, constantly bringing down the NICEST people, and they are women. They are especially dangerous in the workplace, and destroy their spouses, and make more child bullies.

It's not like he's the first kid to be bullied. Plenty have and probably lots have been bullied worst than he was. Suicide wasn't the answer.

"all you have to do is love yourself" thats very true but as his death showed i think, its much harder than it sounds, when you know so much and so many are against you.

Such a shame the Rodemeyers have recieved no justice, Jamey's bullies have gotten away with their crimes thanks to the corrupt police department, possibly paid by the bullies' families or just being as spiteful as the bullies. My prayers go out to the Rodemeyers.