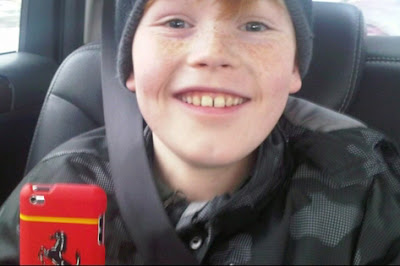 As you know I hate bullies of all stripes. From Stephen Harper and his thug Cons, to those who bully children for being different or gentle, to those who beat helpless old people in senior's homes.

So you can imagine how I feel about those who bullied and assaulted a disabled boy and drove him to suicide.

“He was never the same after the mugging,” said Mitchell’s father, Craig Wilson, who found his son’s lifeless body on Sept. 6 — a plastic bag tied around the young boy’s head — when he went to wake him up for what would have been his first day of Grade 6. “Ultimately it shattered his life.”

Or how I felt when I read what his grandmother had to say today.

“He said to me, ‘Mimi, my biggest issue is that I can’t protect myself, and if a man cannot protect himself, then he is not a man,’” recalled Ms. Wilson.

I wondered why a gentle child would have to become violent to live in a place like Canada. And then I discovered this.

Among the other findings, 45 per cent of all the Canadian youths in this survey agreed with the statement that “to be a man, you need to be tough.” That compared to 13 per cent in the U.K. and 26 per cent in Rwanda.

And it explained so much. Why we have bullies in our parliament, so many goons on our hockey rinks, and why we don't take bullying seriously enough.

For the record, I was a gentle child who was forced to become violent, or take martial arts, in order to survive. And although I did get a measure of revenge, what I can never forgive the bullies for is forcing me to be someone I was not.

Because boys should not be forced to conform to such narrow old-fashioned gender roles. And neither should girls.

The report, released Thursday by the development agency Plan International, found 31 per cent of Canadian boys aged 12 to 17 believe a woman’s most important role is feeding her family and taking care of the home.

They should just be who they are.

Which just happens to be the same message another gentle boy left behind before some anti-gay bullies drove him to suicide.

A YouTube message to his hero Lady Gaga, which one of her so-called little monsters, covered with pictures, and turned into a humble tribute...

And at a concert three days ago in Las Vegas, Lady Gaga added her own...

Remember Mitchell Wilson. And all the others.

I have been reading the paper and watching the news regarding Jamey Rodemeyer and the one missing component that I am not hearing is anyone distinguishing Homophobic Bullying from other types of bullying as they are completely separate. I wish to include a portion of my graduate thesis http://jasonjdotbiz.wordpress.com/ if for no reason than to raise awareness. Thank you

"Homophobic bullying is not like other types of bullying. If a student is bullied based on race, religion, their weight etc., they can run home to an understanding (often relatable) parent/family who understands their pain and can console them. Gay youth do not have that refuge as they 1) Are usually not out to themselves yet, and 2) fear being thrown out of their homes and family. This pent up frustration, hurt and anger eventually leads to what has (sadly) been happening in the media as of late."

hi Jason...I know what you're saying, and it is an excellent point. Which is why it's so important to get out an encouraging message, so even the most isolated gay kids can hear them.
However, since when I was in high school I saw other kids being bullied for being fat, socially awkward, or whatever, I fight all kinds of bullying equally, because it all comes from the same dark place. As the old Jewish saying goes, save one life and you save the world...

would there be any problem to just slaughter bullies after they've done their work, just to repell others from bullying.

Your government (USA) keenly kill other murderers too