Stephen Harper and the Halloween Election 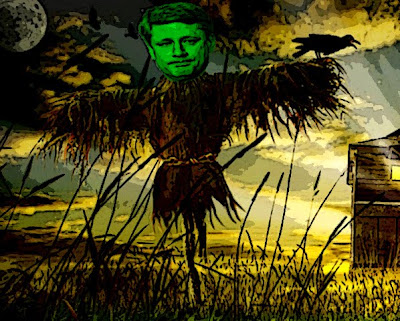 Uh oh. It looks as if we're going to have a scary Halloween election after all. Not because Michael Ignatieff, or Jack Layton, or Gilles Duceppe wants one. But because Stephen Harper does.

Prime Minister Stephen Harper's Conservatives have surged to a big lead over the opposition Liberals in the eyes of Canadian voters, reveals a new poll.... a trend that could dampen speculation of a fall election.

Try to ignore that last line. Because it assumes that Stephen Harper wouldn't want an election if he could win a majority. And maybe it's a rogue poll. But if it isn't it proves that Michael Ignatieff's peek-a-boo strategy was a disastrous failure.

If the trend continues, Ignatieff could soon be facing roughly the same poll numbers as his beleaguered predecessor, Stephane Dion.

Bricker said Ignatieff needs to come up with some policy issues soon that will allow the Liberals to differentiate themselves from the Conservatives. "You don't want to peak too soon, but you have to peak at some point," he said. "We've seen how the peek-a-boo strategy works. If you're not there, you're not there."

So maybe it is that one in twenty fuckup. But if it isn't...... would ANYBODY really be surprised? When there's no there there, and no coherent narrative.

It's a crude game, politics, and an opposition party to win needs one word or one phrase that sticks in the public's mind about the government – time for a change, corrupt, incompetent, uncaring, the tool of big business. Whatever. It's not at all clear what that word or phrase is that the Liberals have hung around the Conservatives' neck.

And Stephen Harper has had the summer to himself handing out billions of dollars and staging one mega photo-op after the other.

Oh sure the government can't fall unless the opposition parties defeat the government. But does anyone SERIOUSLY think that Harper won't give them a reason to do that?

When he has the majority he has slobbered over for so long in SIGHT. Before the economic situation deteriorates further, or the Swine Flu hits.

Great Angry Leader would still have to come up with a way to defeat his own government without making it look like he wanted an election. So he could blame the Separatist Coalition. Which explains this urgent memo.

Harper Tory talking-points flew out of the PMO on Thursday, warning Conservatives that a fall election is not part of the Prime Minister's strategy

But knowing Harper my guess is, if the numbers are there, he'll go for it.... like a wolf for a salami sandwich.

Oh well. Thanks to Jeffrey Simpson's handy list I'm working on some new videos about Harper's corrupt, incompetent, uncaring, tool of big business government. And why it's time for a change.

Simple stories that fit into a simple narrative: Would you really trust this hyper partisan ideological maniac with ANYTHING?

But I leave you with this one I made earlier this summer.

Because sometimes I think we need to be reminded how bad it would be. The summer and the denial are over.

Prepare to fight these Cons harder than ever.

Because the final battle for Canada could be about to begin..

What evidence do you have that Harper wants an election? Has he said anything? Has he done anything?

hi Geordie Tom....Nope. No need for the Secret Agenda. It's not secret anymore.
And yes a more primitive version has been tried before ...and guess what it WORKED.
So I see no reason why a far more sophisticated version wouldn't work. Because luckily for our side Harper is Harper.
i do agree with you that this EI thing is going nowhere. Because all though we have way more than a million unemployed we never hear from them. So their pain is never heard and it fails to move voters.
Which is actually the point I was trying to make in this post.
If you want to move people you have to have a simple story that everyone can follow...

hi rabbit....look Harper is a political animal not a sentimentalist. He has spent the summer spraying BILLIONS of dollars all over the country. He has paraded before the cameras at summits. He has another meeting coming up with Obama.There is at least a feeling of optimism in the air about the economy. How long will that last? Forty per cent of Liberals believe the country is heading in the right direction. And one out of three of them would vote for the Conservatives as their first choice.
A recent poll shows Canadians are starting to get tired of Harper. So is later better?
My feeling is that Harper has always deeply regretted his last missed opportunity to go for a majority,and he'll roll the dice this time. The only question is whether he can come up with a way to defeat his own government without making it too OBVIOUS...

egads, i know iggy has been hanging himself but won't someone PUHLEASE get the guy a set of balls?

really...who's there to vote for? the ndp or greens but elizabeth may is a bit of a whack job, and layton comes up short (oops, pardon the physical analogy pun) when the heat is or could be cooking.

i'd still go ndp though. arth, all this voting for the lesser of evils. and why do the cons keep lying and saying the economy is recovering when we hvane't even begun to see wha's coming down the pipeline?

how many more 'harper strutting around the arctic' stories will we see? gosh, stevo, you sure look good in camofage! yuck.

The election was and is inevitable. The Conservatives under Mr. Harper are clearly the people we need to manage our economy and our foreign affairs. As the longest serving minority government in Canadian history the Conservatives have proven they can govern well on a limited mandate. Imagine what they might achieve for loyal Canadians if they had a majority.

hi Scout....the problem is that when you have one right-wing party and a collection of progressive ones, the harperite message comes through loud and clear while the progressive one sounds like a cacophony.
Progressives in this country need to decide what is more important...their party or Canada?

Hi Elli...I'm afraid I have to disagree with just about everything else you say.
The Conservative management of our economy is a joke. They have embarrassed us around the world.
And since they haven't run a proper minority I hate to imagine what they would do with a majority.
But at least we agree that an election is inevitable. So at least that's something... :)

In Harper's government, anything goes. Campbell premier of BC Is blatantly corrupt. He sold the BC Rail, he has sold our rivers and a host of other shady deals. He used lying deceit to get re-elected and Harper did nothing about Campbell's obvious corruption. So, it figures, Campbell is working for Harper. I am going to support the Western Block Party. The East has always been their own separate country for as long as I can remember. All the Westerners tax dollars go to the East. I will never forget, when Chretienne said he didn't like the west because, we are different. However, he happily took the Wests tax dollars.