Stephen Harper and the Perfect Photo-Opp 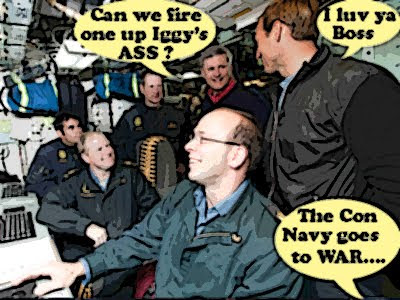 Well I guess this is no surprise.

The federal Conservatives, breaking their own taboo, are calling on Canadian voters to give them a majority in the next federal election.

Not after a summer of giving away billions of dollars of our tax money to try to make the Cons look good.

Not after this perfect photo-opp

Then, Defence Minister Peter MacKay sauntered onto the deck with Prime Minister Stephen Harper. They stopped to make idle chit chat until urged by handlers to move forward a few metres in order to have them perfectly positioned with the other two vessels in the background.

But wait! There's more! Three CF-18 jets flew past in formation. But the fly-by was a little too fast for some camera operators and photographers to catch the entire montage of sub, jets and coast guard, so the CF-18s passed over four more times. 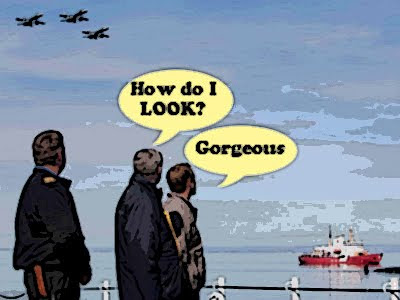 Golly. Isn't it good to know our armed forces have the time to keep the Taliban AND the Russians from invading Canada?

And can STILL put on a jolly good show to help the Cons try to win a majority. By posing as the Defenders of the North. When they just want Big Oil to own it.

You know all things considered when it comes to portraying Great Ridiculous Leader as a WARRIOR.

I think I prefer this one... 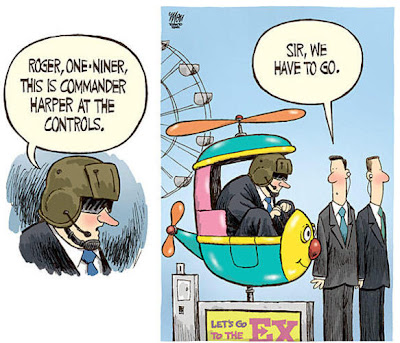 Because he's no warrior...or Leader eh?

Can't coordinate the fly-by of CF- 18s, can't make the group photo at an international conference.
Can't keep promises, can't tell the truth. Can't face the press most of the time. Can't show any real emotion, can't be trusted.

And people VOTED for HIM?

Wake up Canadians before we become an Alabama or Texas of the north.
At this rate, we don't have that much further to go.

hahahaha! that cartoon is GREAT!

Yes he must go! Torontonian: I don't think people voted for him...I think people did not want to vote for Lib, NDP or Green. As a result, we got him.

When the fed election comes along, tell people that voting is as easy as ABC: anything but conservative.

hi Torontonian....I share your feelings completely. I can't understand why more Canadians can't see Harper for what he is; a fraud and a danger to Canada.
If he ever gets a majority it'll be Alabama here we come before we even know it.
And we'll regret it FOREVER...

hi Scout...yes it is rather good isn't it. I like Theo the cartoonist. He once drew Harper being taken away in a straitjacket by two guys with butterfly nets.
And I blew it up and put it on my wall... :)

hi Jason...I think the people who voted for Harper should be forced to wear dunce caps and sit in the corner for at least a month. ;)
And thanks for plugging my party....the Anything But Conservative Party of Canada.
It used to be the Anyone But Harper Party. But now I think they should ALL go... :)

Hi Oemissions...I'm glad you liked that cartoon too. I LOVE the little face on the toy plane.
Too bad the other one is sooooooo UGLY... :)