Stephen Harper and the Mask of Evil 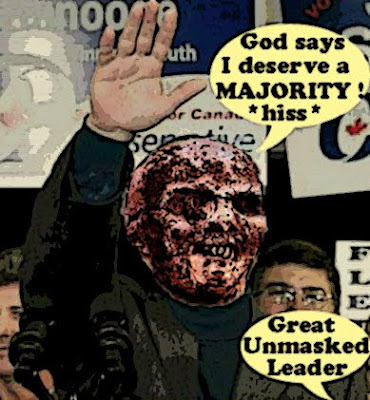 Now that Stephen Harper's mask has finally slipped a bit, and he has revealed that he gets his marching orders from his Great Mamoona.... and not from mere mortals.

Stephen Harper says he's more concerned about God's judgment than how history books rate his term in office He said he is not troubled by thoughts of what judgment history will render.

And now that everyone can finally understand why he hates strong women and gay people. Why he doesn't care about the planet. Why his foreign policy is so bizarre. And why he supported the war in Iraq.

Because his church tells him that's what the Great Mamoona says.

According to its Statement of Faith, adherents believe the Bible is "inerrant" and the Second Coming is "imminent." Women are still not accepted for ordination, and a position paper on divorce does not mince words on a related matrimonial subject. "Homosexual unions are specifically forbidden," it decrees, "and are described in Scripture as manifestations of the basest form of sinful conduct."

And now that people can also understand why the Christianists always considered him one of their own....

They see him as an image-savvy evangelical who has been careful to keep his signals to them under the media radar, but they have no doubt his convictions run deep — so deep that only after he wins a majority will he dare translate the true colours of his faith into policies that could remake the fabric of the nation.

I just wanna say none of this crazy SoCon stuff surprises me because I've been warning about this hidden danger for years. About all those Christianists in the PMO. And the man behind the Mask of Evil.

But I have to admit this REALLY shocks me:

In the interview, Mr. Harper also talked about his well-known passion for hockey and his complicated relationship with the piano.

“When I play the piano, I become very involved emotionally, I'm no longer the same person. It's not just a hobby,” Mr. Harper said.

Golly. Can you believe THAT ?

Stephen Harper, the cold cruel psycho who says he likes to see fear in the eyes of others....and doesn't care about a Canadian kid being tortured in Guantanamo... hunched over a piano getting EMOTIONAL?

Where have I seen this movie before?

So now all I'm left to wonder is whether our cowardly right-wing MSM will ever have the courage to pull our monster's mask off ? Before it's too late.

Because if you think Lon Chaney looked ugly when his mask came off.

Take a good look at Stephen Harper thirty seconds after he wins a majority. And finally has the power to remake the fabric of the nation he hates so much.

OK, this guy is getting more dangerous every day. A Bible thumper? WTF?! I didn't think he was THIS crazy, but now that I look back, it would explain why he took Omar Khadr's case to the Supreme Court. What a moronic swine.
Harper should be a televangelist in the US, get the fuck out of Canada and leave our parliament and beautiful liberal country ALONE you freak!

You know I think we're all making way too muuch from Harpo's latest confession, really. What he really meant to say was: he's freaking scared of earning a living after he's no longer paid by the taxpayers. Second, he's way too freaking scared of Laureen rushing out and buying a Harley ala Harris' wife. IOW's Laureen has to go get a job. Really there is nothing more to it.

interesting how the xtian's own prophecies say there will first be a false anti-christ (bush?), then the real one will emerge, he comes from the north, and seems not too bad at first but then declares that god tells him what to do.

so what now.....steve sets off nuclear missiles to guard canada's arctic?

life must be lonely as dorian gray.

hi Noah...I agree with everything you say...and I like the way you say it... :)
The truth is there is something not quite right with Stephen Harper.
I would have hoped that more Canadians would have realized that by now.But if they don't do more to unseat him I'm afraid they might learn the hard way...

Hi Toe...I wish I could be as optimistic as you are. But I really think Canadians are dealing with a political animal they have never seen before so they don't see the real danger of giving a man like that a majority.
On the other hand after that Senate dump and his godly admission I started thinking that maybe Harper is about to QUIT !!!
Until my buddy poured cold water over my head and brought me down to earth... ;)

hi Scout...oh no...don't tell me the real Anti-Christ is coming from the north. I thought he would spring from a much hotter place...but then his Devil Bride could be Sarah Palin...so now I'm really scared. ;)
And so so tired of Stephen Harper and his crazy game, I'm ready to put on the Mask of Evil myself, and chase him all the way back to Hell...or Alberta...