The Final Humiliation of the Con Clown Dean Del Mastro 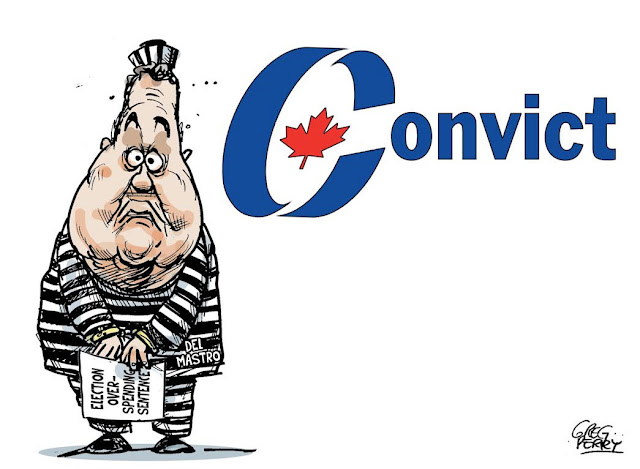 The news hit me like a blast from the past. A very dark past. A past I sometimes wish I could forget.

But there was Dean Del Mastro, who once somehow managed to be Stephen Harper's favourite Con enforcer AND his point man on ethics, on his way to jail. Again.

To complete his sentence for electoral fraud.

And I have to admit I was shaken.

For who can forget the last time he clinked and clanked his way to the Big House?

Well I watched that video about a thousand times, and laughed so much I almost died !!!

Who can forget, as Stephen Maher reminds us, how the Deaner fought the law over and over again?

Who can forget what that means for Canadian democracy?

Del Mastro is now waiting in the chow line with other inmates, likely at the Central East Correctional Centre in Lindsay, Ont., a testament to the fact that Canada is a nation of laws, and the powerful, if they are sufficiently dim-witted or bull-headed, can be made to pay for their crimes.

Or the moral of the story.

It’s as ugly a story as we have seen in Canadian politics in recent memory, but it has a good moral. There is a limit, a firm limit, on how far bologna will take a man.

Because let's face it eh? Del Mastro was always full of baloney... 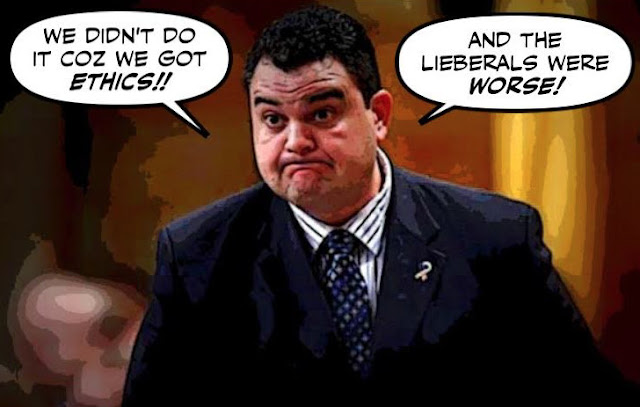 He was the author of his own misfortune.

He could have avoided his jail cell if he had been prepared to respect the law, either by following it or, when he was caught, acknowledging that he had broken it and saying he was sorry.

His failure to respect the law says something about an occupational hazard of high political office: the mistaken belief that with enough spin you can manage anything.

And he was a ghastly bully who served his depraved master well... 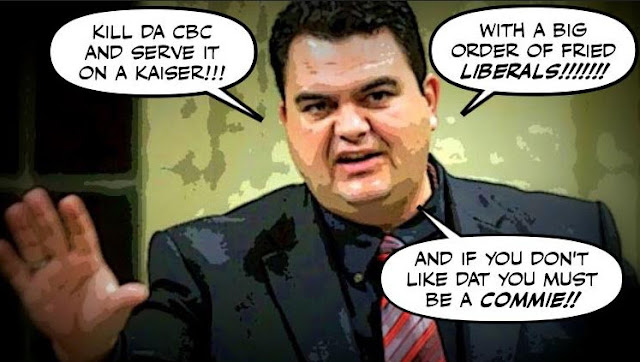 Until he made a fatal mistake.

In the House, Del Mastro specialized in partisan bluster, smearing his government’s critics at the prime minister’s bidding, an unusually thuggish attack dog, but part of a long tradition in Canadian politics.

He erred, though, in believing that the partisan nonsense that works in the House of Commons would work in a court of law.

By first breaking the law, then clumsily trying to deny he had... 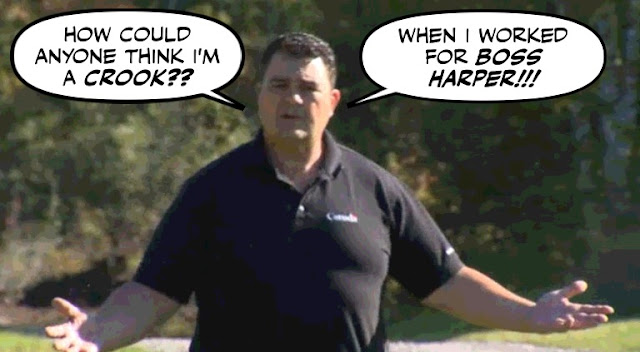 He could have just come clean with Elections Canada and made a deal, which might have interrupted his political career, but he would not gone to jail. Instead, he used his role as Harper’s parliamentary secretary to attack investigators, witnesses and journalists, in the House of Commons and on TV, and lied, over and over again.

Only to end up revealing his appalling judgement once again, by questioning the judgement of the judge... 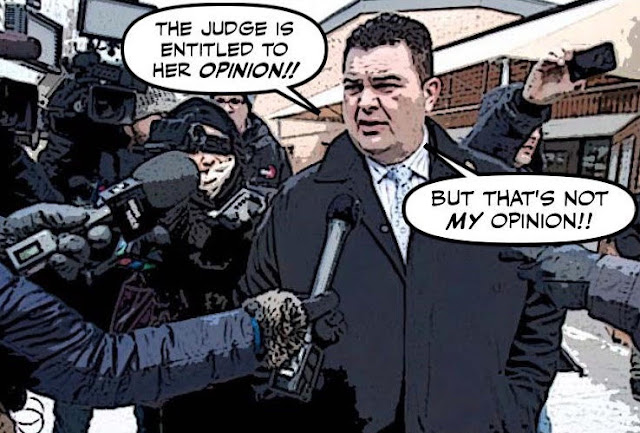 Which in my opinion should have cost him a lot more than just three more weeks in jail.

But then I also thought that Del Mastro's depraved master should have joined him in the Big House, for all his crimes against Canada... 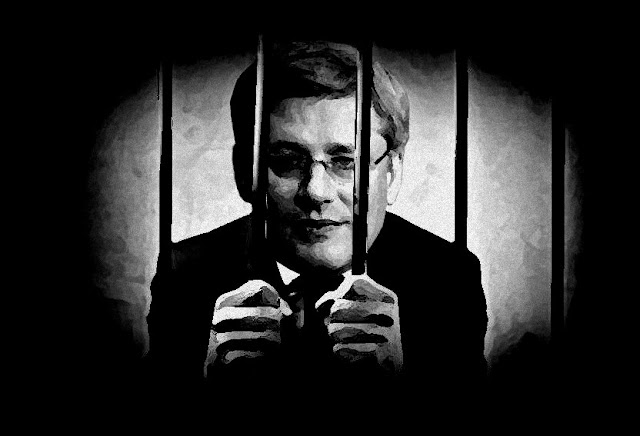 So what do I know? Except that there is no justice.

But at least the ghastly Deaner's trial and tribulations did remind Canadians of the complete contempt the Harper government had for the rule of law.

Which is a good thing, because sometimes I think that too many Canadians have forgotten the horror of the Con regime.

Sometimes I think that those who can forget a nightmare like that one are condemned to repeat it.

And that it could happen again, if this creepy Harper clone ever becomes prime minister... 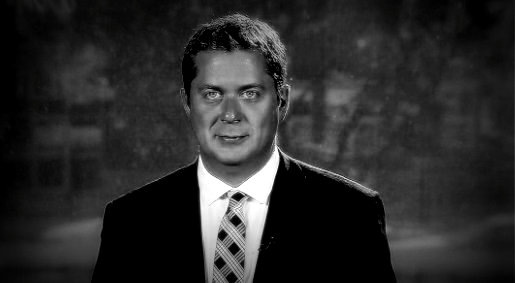 But right now I think I'll just take some time to celebrate Dean del Mastro's return to the Big House, in my usual quiet way.

By playing the same song I played the day he was convicted.

I don't want to go overboard, because that beefy bully is not worth it eh?

But any day a Con goes to jail, is a day worth celebrating...

Yes, yes, it's a wonderful thing. But the appalling parliamentarian and Con Committee Capo Dean El Monstro, though setting a fine example by sweeping the spotlight away down the criminal halls of the Crowbar Hotel shouldn't be the only one to hog the glory: he was just one of the Cons (and now just one more con) Harper managed to recruit from a cohort conspicuously apart from the Cons' otherwise evap-attritting pool of base geriatry. Together their flagrant corruption of electoral rules (perhaps with a little help of a not-so-young judge who decided the result of the Etobicoke riding election by a statistical sample of 10% of votes cast, instead of just re-counting actual ballots) revealed some basic truths about the Con family recipe: what few offspring spawned from their moribundity tended to be moral defectives whose ethical keenness during the Cons' first and last majority related only to pleasing the Patron of Perfidy, and the head-scarfed, nose-ringed, mixed-race kids who took time from their environmental studies, medical pot start-ups, and social activism just couldn't relate to creepy twerps like Pierre Poillievre and the corrupt Deanster ---so they got out and voted on general principle.

Yet, more specifically, Harper's persistent nose-thumbing of electoral law (Dean's only doing his surrogate bit) also began to offend even conservative minded voters, especially the ones who were, or who'd been, willing to sacrifice their physical safety to defend democracy, of which voting is the basic element.

Still, El Monstro serves a valuable purpose aside from his exemplary punishment, and that is to renmind that the likes of Poillievre are still festering in the Cons' shadowy catacomb.

Thanx for the memories, Dean. How sweet it is!

Deano the big bambino must be bawling his eyes out right about now. It's too bad they didn't tack on an extra few months to his sentence for the sheer arrogance and disrespect he's shown the court. His taxpayer paid pension should also be stripped to show other politicians that when you break the law there are consequences.
What I'd like to know now is who has paid for his indefensible defense? Him or us taxpayers??? Better not be us.
Enjoy your stay at the crowbar hotel Deano. I'm sure you'll meet a lot of interesting people just like yourself, lowlifes who also claim innocence.
JD

Thanks Simon, between the news about Del Mastro and that video you made me smile, something II hardly ever do these days. Some good news at last. However, I think I'll wait until creepy Scheer is defeated before I dance in the streets like that young man. :)

CTV had him on the air every Sunday, just saying

hi Geoffrey...yes I agree with you, Del Monstro shouldn't be the only Con to hog the glory or shuffle off in handcuffs. But I think it's going to take another twenty years before we find out what really happened behind the curtain in the Harper PMO. And by that time they'll probably be sheltered by the statute of limitations, or all be living at Toews' place in Paraguay. But at least the hapless Del Mastro did remind those who might have forgotten of the corruption of the Harper years, and hopefully dissuaded some from voting for the new Harper, Andrew Scheer...

hi JD...yes, they say that most serious convicts never admit they were guilty, and are always claiming that it's a travesty of justice WAAAAAAH!!!
So I only hope they can stay calm and collected when the Deaner turns up on the chow line and starts claiming that NOBODY is as innocent as him... ;)

hi anon...you're welcome and thank you. I'm always trying to make people smile, but these days it's not easy. I understand that and see a lot of depressed people everywhere. However I would urge you to dance like the guy in the video. I do, although because I'm shy I do it at home... ;)

hi Steve....Del Mastro was on CTV every Sunday? Lordy, how low have they fallen? Will they now at least take their cameras to the Big House, so he can share his thoughts on life in the pen and his new friend Butch? That I would watch... :)

Del Mastro’s case is particularly egregious. He wasn’t just any member of Parliament. He was Prime Minister Stephen Harper’s parliamentary secretary and designated point-man in defending the Conservative party in the robocall affair. He continued to serve on the House of Commons’ ethics committee even after it was revealed that Elections Canada was investigating him for campaign overspending.

Now, after all the denials, Del Mastro has been led away from a Peterborough courtroom in handcuffs and leg shackles, as his former Conservative colleagues in Ottawa look away and pretend they hardly knew him.
This won’t wash. The Conservative party under Harper has compiled a sorry record of disregarding election laws. As the New Democratic Party pointed out in the wake of Del Mastro’s sentencing this week, the party or individuals connected with it have been convicted of cheating in every election going back to 2006.