Steve Bannon and the Death of the Republican Party 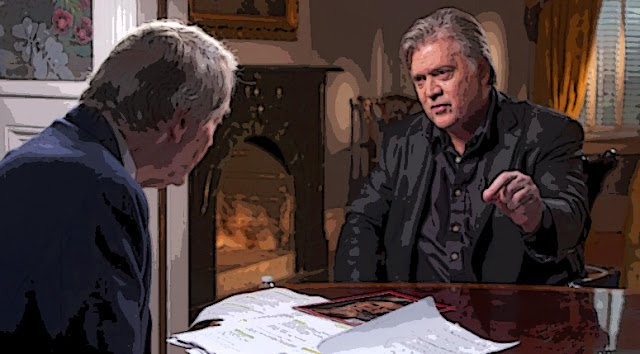 I don't know or care how the grubby boozer Steve Bannon managed to burrow into Donald Trump's diseased brain.

And only a psychiatrist can explain why Trump believed anything Bannon told him.

But now Bannon has granted an interview to CBS' 60 Minutes, and one thing he said did make sense. 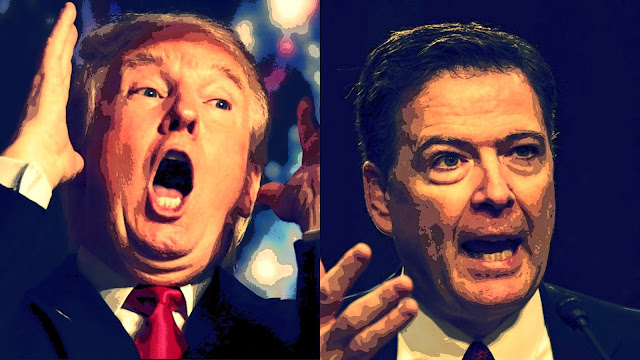 Trump's decision to fire James Comey was a huge or yuuuuge political mistake.

“I don’t think there’s any doubt that if James Comey had not been fired,” Bannon told interviewer Charlie Rose, “we would not have a special counsel.” “We would not have the Mueller investigation in the breadth that clearly Mr. Mueller is going,” he added, referring to special counsel Robert S. Mueller III’s appointment to investigate any possible connection between Trump or his campaign with Russian meddling in the 2016 presidential election.

And of course this is a bonus.


For Bannon's declaration of war on the Republican establishment will set off a civil war that may fragment and destroy that party long before the next election.

If Trump's decision to end a temporary amnesty for the so-called dreamers doesn't do that first.

Mr. Bannon predicted deep division within the Republican Party over Mr. Trump’s recent move to end the program that provided temporary relief from deportation for hundreds of thousands of young people in the United States illegally.

The president set a March end date for the program and asked Congress to come up with a solution in the meantime, a task that Mr. Bannon said could split Republicans and cost them their House majority in the 2018 midterm elections.

“If this goes all the way down to its logical conclusion, in February and March it will be a civil war inside the Republican Party,” he said.

Which is of course music to my ears.

For as I keep repeating, there's nothing I like more than the smell of the Republican party burning in the morning. 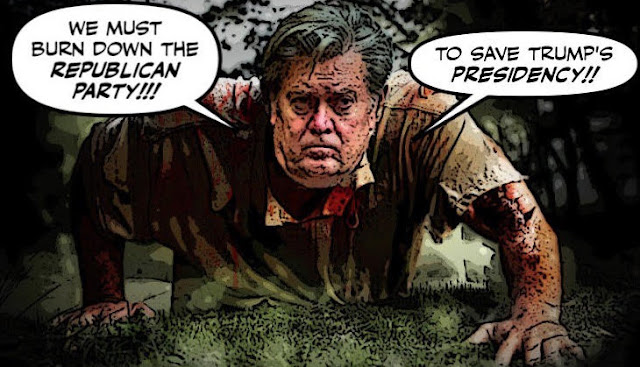 Bannon's zombie army is now working for our side now.

Even if it's too brain dead to know it.

And it's going to be a beautiful bonfire...

Labels: Donald Trump, Steve Bannon, The Death of the Republican Party, The Rise and Fall of the Orange Oaf

I'll believe it when I see it. A landslide for Hillary was supposed to finish off the GOP for good, and we all know how that turned out.

The three disparate groups that make up Trump's minority have little in common. The loudest, racist white supremists. the richest Chamber of Commercites and the stupidest anti marriage and reproductive rights banded together with people they don't really like in hopes of getting their own way. When they don't they breakup will be close.

Never underestimate the purity ponies and the power of stupid people in large groups. The purity ponies stay home or throw away their vote if they don't get a candidate to the left of Mao. But the GOP will always vote in hivemind lockstep against a Democrat no matter what. They've been brainwashed by religion and racism and answer to a "higher authority": Supply-Side Hitler, the "Judeo"-Christian god of the holey profits of war. That "Judeo-" part only comes with an asterisk to give tenuous support to Israel to fulfill their Dominionist rapture fantasy, hate on Muslims, and "take all that oil" in the Middle East.

No matter how wishy-washy the Republican at the top of the ticket, the Democrat is always worse. The purity ponies and idealists don't realize or won't admit that this is a bloodsport, with an irrational enemy tribe who is literally willing to sacrifice themselves, the country and even the whole world just to get what they want.

Democrats tend to be "ideas" people and "thinkers," and so they lose elections because they keep bringing pens to a sword fight. The fence-sitters need to be convinced of the life-or-death reality of strategic voting. Just like the whiners in Canada, who'd be content with the country burning down due to a Harper-Trump partnership, because "Trudeau is a neolib shill" who didn't wave his magic wand, turn Canada into Disneyland and put a million dollars in everyone's pockets.

I'm not religious myself, and I hate to mix metaphors, but sheesh, "check your privilege" notwithstanding, these people really need to count their blessings before the cuckoos hatch.

I don't know if anyone has read Breitbart recently, but it might as well be called The Bannon. The other day I counted eight stories about Bannon on its front page. It's starting to resemble a cult, and the Republican Party will not survive it.

Your three groups have a hell of a lot in common. Evangelical churches teach that riches on Earth are evidence of Christian virtue. This certainly comforts the "richest Chamber of Commercites" and provides the justification for crapping on the poor.

The "stupidest anti marriage and reproductive rights" people, aka white evangelical Christians, very much intersect with "racist white supremacists." The Southern Baptists especially legitimized slavery and then Jim Crow laws. And they're still at it today:

A Resolution Condemning White Supremacy Causes Chaos at the Southern Baptist Convention. At its annual meeting, the evangelical denomination initially declined to consider a statement of its opposition to the alt-right.

Great summary. Fortunately the Canadian Cuckoo contingent including the mesmerized maxes out at around 40% but vote splitting combined with an even more enhanced dirty/corrupt election campaign is still an option.
RT

Amen. I'm fucking sick of the purity ponies. Now they are whinging in Ontario because legal weed won't be a free for all. They are crying despite the fact you can grow your own and order it online. These people will not be satisfied until they are paid to smoke weed and find a nice rolled joint under their pillows every morning.

hi anon 12:46...I believe that the last election will be seen as a historic anomaly, where a weak Democratic candidate didn't understand the forces at play, and allowed a terrible Republican to become president. Don't count on it happening again. If the Republican party splits in two, it will be game over...

hi rumleyfips...I can't see anything but disaster ahead for the Republicans. When I read what the Bannonites are saying it sounds like the kind of stuff you might hear at some cult, where the truth is twisted like a pretzel to try to back up their deranged world view. And just the mention of Hillary Clinton's name is enough for them to drop everything and start chanting"lock her up, lock her up."
It's insanity and it will not end well for them or America...

hi anon 10:16 pm...I have read The Bannon and you're right, since their master returned they can't write enough stories praising him He apparently lives in the Breitbart office, so as I mentioned above, it's more cult than publication....

hi RT...the only way the Cons can win the next election is by playing dirty and hoping the NDP can split the vote. So it has been in the past, and so it will be in the future, until the left unites. Whether progressives can grasp that simple fact remains to be seen. But if they're serious about fighting fascism, they know what they must do...

From the concerns expressed over the possibility of vote-splitting, I take it that the Liberals have given up on strategic voting. That's something of a relief. It doesn't appear to be time yet for the introduction of the next iteration of that appeal that they contrive. Everything in its time, I guess. A lot like the formerly pressing need for electoral reform:

“Under Mr. Harper, there were so many people unhappy with the government and its approach that they were saying, ‘We need electoral reform in order to no longer have a government we don’t like.' However, under the current system, they now have a government they are more satisfied with. And the motivation to want to change the electoral system is less compelling.”

Now that we've got that exciting thing over with and given that under the current system we have the kind of leadership that Canadians expected, we should seize the opportunity to be more satisfied permanently. All the more so since the CRAP Party membership didn't seem to wince when Bernier was trashed.