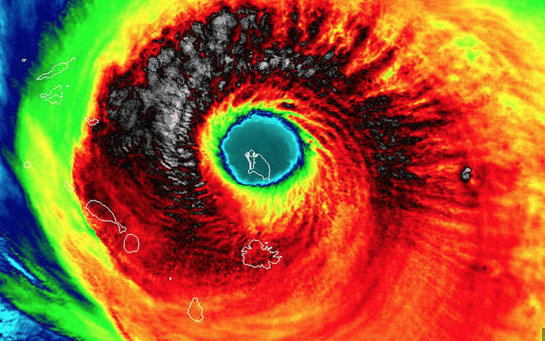 It's a monster hurricane, roaring out of the Atlantic Ocean and into the Caribbean.

Hurricane Irma, one of the most powerful Atlantic storms ever recorded, battered the islands of the northeast Caribbean early Wednesday, leaving severe damage in its wake as it barreled toward the Virgin Islands and Puerto Rico.

A monster so big it has left this senior scientist at the National Hurricane Centre speechless.

I am at a complete and utter loss for words looking at Irma's appearance on satellite imagery. pic.twitter.com/B0ewFyvcSv
— Taylor Trogdon (@TTrogdon) September 5, 2017


But don't tell that to the right-wing blowhard Rush Limbaugh. 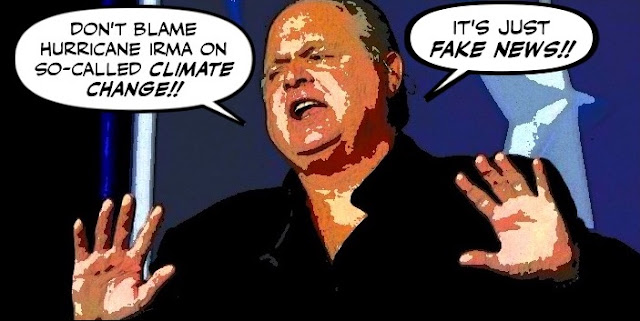 For he thinks it's just fake news.

Rush Limbaugh didn't say the magic words, but on Tuesday he basically accused the media of creating fake news about Hurricane Irma, which is threatening Florida after hitting Barbuda and Antigua.

“These storms, once they actually hit, are never as strong as they're reported,” Limbaugh claimed on his syndicated radio show. He added that “the graphics have been created to make it look like the ocean's having an exorcism, just getting rid of the devil here in the form of this hurricane, this bright red stuff.”

Which considering that he appeals to the dumbest Americans, couldn't be more irresponsible or more dangerous... 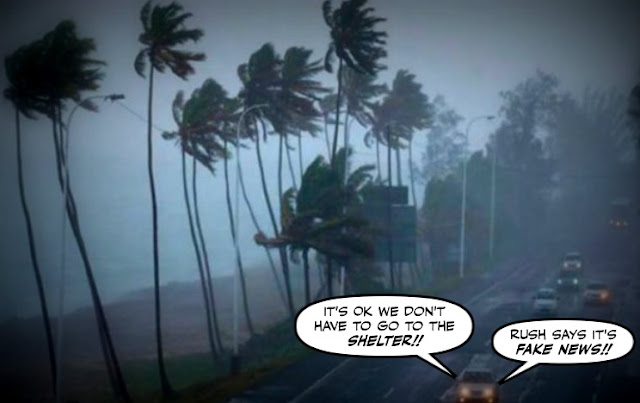 To state the obvious, these are potentially dangerous comments from Limbaugh, who is based in Palm Beach, Fla. He is encouraging listeners who might be in Irma's path not to take seriously the official guidance disseminated through the media.

But of course, like all climate change deniers he knows what will happen to them and their fat fuhrer when they can't deny it any longer.

For it will be the end of them.

As for Limbaugh, if there was any justice he would be arrested, but since that will never happen, I'm just hoping he's back on drugs.

For the day he hits the ground with a sickening thud, will be a happy day indeed...

The comic book graphics never match reality Rush. When Palm Beach washes away maybe you will have more respect for mother nature. Most Islands in the Carribian in the path will be washed over. Thats harsh.

So, I am sure, Rush will just sit there as Irma passes over his head. If he so much as budges I hope his listeners will have learned something.

I only hope that Hurricane Irma will take dead aim at Trump's Mar-A-Lago estate, and along with Hurricane Jose forces him to accept the reality of climate change. Mother Nature might then succeed where so many have failed.

hi Steve...I have a lot of respect for Mother Nature. In fact I am on my knees praying that she will spare those poor little Caribbean islands that I love so much, and save her full fury for the rich bastards in Palm Beach, and of course Trump's Mar-a-Lago estate...

hi UU4077...as you know my favourite way to attack Cons and other right-wing reactionaries is to mock them. But what Rush Limbaugh is doing is really despicable, for it's entirely possible that he could cause some of his ignorant listeners to lose their lives. Getting people to obey evacuation orders is difficult enough without scumbags like Limbaugh playing down the dangers of a category 5 hurricane. The man should be tied to a palm tree, naked, and be forced to endure the hurricane's full force. Instead of bringing out the worst in everyone, including me... ;)

hi anon...well that makes two of us. As I said above I am fervently hoping that the Mar-a-Lago estate takes a direct hit. And the only thing better than that would be if Trump was inside... ;)

This footage of Irma in the Atlantic/Caribbean is unbelievable:
https://www.theguardian.com/world/2017/sep/07/where-is-hurricane-irma-heading-mapping-the-path-of-destruction

Sure, I wouldn't mind Mar-a-Lago flattened, but just hope his workers get out safe and sound... Bad enough to have such a creep as a boss.

Libtards refuse to see the bright and positive side of things. The light from the wildfires out west allow the rich golfers to play later into the evening, the hurricanes down south will destroy the older tenements and allow the national developers to rebuild with newer buildings, which could likely allow for increasing rents and restructuring neighborhoods. A win win for everyone but the people actually affected. In case you are wondering this is sarcasm, but likely not far off GOP reality.

CNN is reporting that Rush has, apparently, rushed out after all.

Yeah, yeah, and what's wrong with a little global warming? At the current rate... in 10 years we should be able to grow bananas in Canada. Saves us importing them.

On a more serious note, Naomi Klein beat you to it:

The Shock Doctrine: The Rise of Disaster Capitalism
https://www.amazon.ca/Shock-Doctrine-Rise-Disaster-Capitalism/dp/0676978010/

This Changes Everything: Capitalism vs. the Climate
https://www.amazon.ca/This-Changes-Everything-Capitalism-Climate/dp/0307402002/

No Is Not Enough: Resisting the New Shock Politics and Winning the World We Need
https://www.amazon.ca/No-Not-Enough-Resisting-Politics/dp/0735273995/

hi Filcher...I think you captured they way many Republicans think brilliantly. For one reason or another I have been reading the comment pages of Breitbart more than I should, and I can't believe some of the things they say. Some of them are just ignorant, but some of them are so crazy it's like they're from another planet and I fear what they might do to our North America...