Is Donald Trump Preparing To Wage War On His Own People? 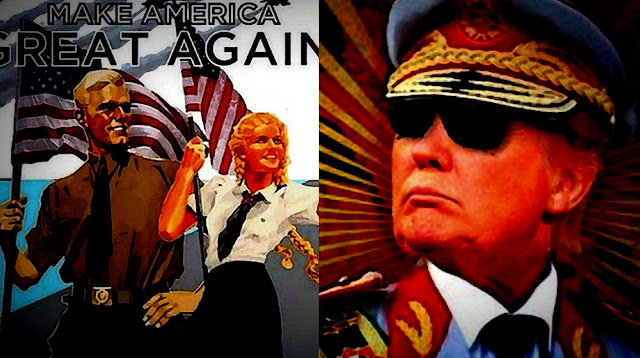 Now that Donald Trump has revealed his inner fascism, and how far he is prepared to go to flout the rule of law.

Now that a poll commissioned by his beloved Fox News suggests that most Americans believe that he is tearing the country apart.

It might be a good time to ask WHY?

One that could set the whole of North America on fire... 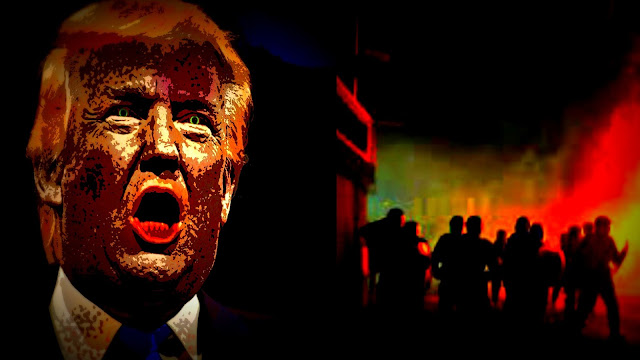 Is he incompetent, or evil, or out of his mind, or all of the above?

And the best answer I have heard so far is the one from Charles Blow, who believes that Trump is trying to raise an army.

Why does Trump continue to do things that are so divisive and alienating to the majority of Americans? Why does he keep fueling the white-hot fire of his base to the exclusion of the other segments of the country?

I have a theory: Trump and the people who either shield or support him are locked in a relationship of reciprocation, like a ball of snakes. Everyone is using everyone else.

But in addition, and perhaps more sinisterly, I think that Trump is raising an army, whether or not he would describe it as such, and whether or not those being involved recognize their own conscription.

An army of zombie zealots to go after anyone who tries to evict him from office... 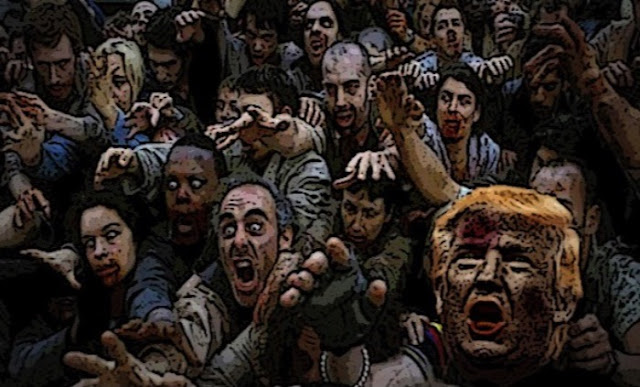 Should something emerge from the Robert Mueller investigation — an investigation that is continuing unabated even as Harvey rages — that should implicate Trump and pose a threat to the continuation of his tenure, Trump wants to position any attempt to remove him as a political coup.

Even at the risk of causing a new civil war.

Trump is playing an endgame. In the best-case scenario, these die-hards are future customers; in the worst, they are future confederates.

What would Trump’s army do if he were compelled to leave but refused to graciously comply?

It's a haunting question, and although nobody can be sure what might happen, it does lead to another even more disturbing question:

What might the enemies of the U.S. do, if Americans did tear their country apart?

Would they duck and cover? Or would they take advantage of the situation and finish off the wounded giant?

And nobody can answer that one either.

But this is true and cannot be disputed...

We live in a dangerous time. Trump and his zombie army are threatening our fragile future.

It's treason, and they are traitors.

So they must be defeated, by whatever means necessary, before they kill us all...

Labels: Donald Trump, The Madness of Trump, The Rise and Fall of the Orange Oaf, Zombie Apocalypse

No civil war is not in the cards, if it looks like he will be impeached Trump will declare victory and then resign, and that is according to his ghost writer for the Art of the Deal, who regrets helping Trump with that book.

I can't see how the U.S. Is going to avoid a civil war. Trump's supporters are so paranoid and dumb they'll think he's been railroaded even if he resigns. And what will the army do?

Is he incompetent, or evil, or out of his mind, or all of the above?

Oh, all of the above, of course.

I don´t buy the “Trump is building an army” argument, at least intentionally. Such a level of plotting and subtle manipulation appears beyond him.

However, it does not seem beyond Mike Pence. I’m more worried that Pence might be edging Trump on in these behaviours, setting the stage for Trump’s fall or resignation, for whatever reason, and start organizing those disparate groups into a unified front.

I can see a coup but a civil war seems unlikely but not impossible. I could, very easily, be wrong but the political infrastructure for a civil war just does not seem to be there at the moment.

What might the enemies of the U.S. do, if Americans did tear their country apart

The U.S. needs Partition. Constitutionally, we're stuck in an abusive arranged marriage for which staying together for the kids is not an option anymore. Lincoln made a well-intentioned mistake trying to keep the Union together. Had he lived, perhaps Johnson wouldn't have intentionally sabotaged Reconstruction. I'm sick and tired of the "values voters" dragging us down and keeping us mired in backwards policies and thinking, that Democrats have to pander to in order to win federal elections and not alienate the all-important evangelical pig farmer contingent in some population-40 wheat field in Iowa.

We are the only first-world (I use that term loosely) nation without a universal and comprehensive healthcare policy. The only one that has a third of a billion guns and as many people. A warmongering pariah that garners international "respect" not through benevolence and leadership, but bullying, intimidation, and "regime change" even in allied countries whose policies we find objectionable to our own interests. Those who aren't on board with this are demonized as unpatriotic traitors and even downright blasphemers, who dare risk the ire of God by criticizing the shining turd on a hill that was ordained as the chosen nation by NRA Moses himself.

So, let the rubes have their Trumplandia. To paraphrase Shakespeare: A pariah state, governed by an idiot, signifying nothing. Let liberals have their own country that ignores them, builds a wall to keep them out (which they no doubt would interpret as "liberals paying for a wall to make America first again"), and finally gets to join with our civilized allies to move into the 21st century. We can have universal healthcare. We can have a sensible drug policy. We can invest in science and education. We can finally do something about our insane gun problem, and once and for all tell Wayne LaPierre to go play Putin Roulette with 6/6 odds of "winning."

But we can't do this as long as the electoral college and Republican gerrymandering allow a tiny fraction of IQ-40 Fox viewers in population-40 wheat fields to hold the rest of the country hostage. They vote Republican en masse in every election because they believe it's their religious obligation. Apathy among disaffected liberals and social-democrats, who split between Hillary and Bernie last time around, simply doesn't exist on the opposition side. They don't even care who the Republican candidate is or what he stands for. They simply take pleasure in voting against anything that resembles icky "liberalism," with all its attendant diversity and freedom of "vice."

In short, they hate us for our freedoms. So, let them have Orange Korea, and we'll have Lower Canada. Make America Consciously Uncouple Again.

Hi Gyor...I also believe that Trump will end up resigning, since I don't believe that the Republicans will ever summon up the courage to impeach him. But remember the south is swarming with heavily armed militias, conspiracy theories are a dime a dozen, so I don't think anybody can rule out serious outbreaks of violence which is the kind of civil war I'm talking about....

Hi anon...maybe I'm getting paranoid, but like you I can't see how this story is going to have a happy ending. A lot of Trump supporters don't believe that their man can do anything wrong, and if something happens to Trump I can see them lashing out at the media or any others they perceive to be his enemies...

Hi jrkrideau....If you read some of the comments by Trump's deplorables, and remember that many are ignorant and armed, I can see mass terrorism breaking out. Whether it will spread enough to become a modern civil war remains to be seen, but I don't think anyone can rule it out.

The following webpage is a keeper! Most detailed summary I’ve seen yet!

I think you're on to something Simon. Don't forget about this story:
http://www.npr.org/2017/08/28/546743742/trump-administration-lifts-limits-on-military-hardware-for-police

It's pretty obvious to me that local police will bankrupt municipalities as they buy a pile of 'toys' designed to assault freedom-seeking citizens.

Since 911 the POElice have been arming up like the Zombie Apocalypse is here. The amount of ammo the US Federal Government has been stockpiling makes no sense unless a great cleansing is warranted.