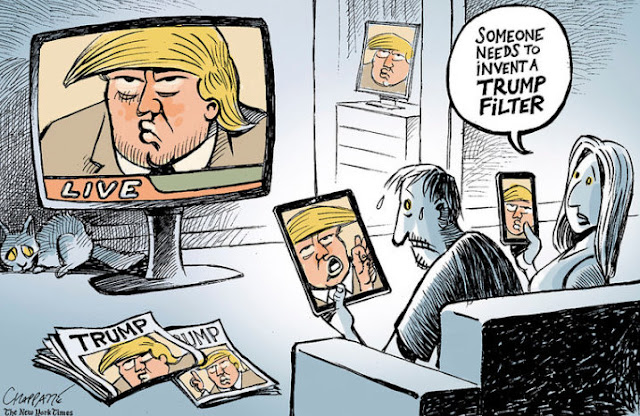 I must admit that I've just about had enough of Donald Trump, and I wish I could filter him out of my life.

Just the sound of his whiny voice, or the sight of his bloated orange ugliness, is sometimes enough to make me feel like vomiting.

So about a week ago I was glad to find out that I am not alone. 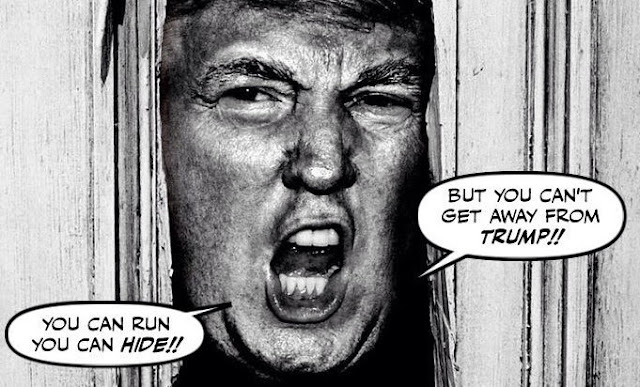 And that the Washington Post's Dana Milbank felt like Trump was killing him. Really.

President Trump is killing me. No, really. He’s killing me. I went for my annual physical last month, and, for the first time in my 49 years, I had to report that I’ve not been feeling well: fatigue, headaches, poor sleep, even some occasional chest pain. My doctor checked my blood pressure, which had always been normal before: alarmingly high!

Felt that he was suffering from Trump Hypertensive Unexplained Disorder, or THUD.

And that he wasn't the only one.

I have a strong suspicion THUD is a widespread phenomenon. A dentist tells me orders have surged in the Washington area for night guards because more people are clenching and grinding their teeth in the Trump era.

Psychotherapists tell me that they are unusually busy and that most clients are talking about Trump, who is exacerbating whatever neurosis, depression or other conditions they had. This is probably quantifiable, but I am too fatigued to do this work. My heart can only take so much.

But while Milbank would later claim he wrote that article "half in jest."

He now says that judging from the reaction he has received, Trump actually is making both those who despise him, and those who worship him, crazy. 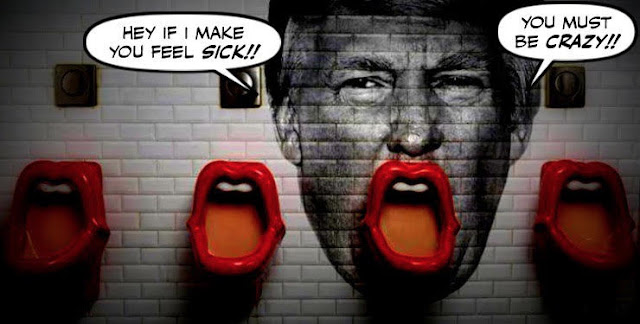 From the other side came a similar profusion of responses, in email, on Facebook and from the cesspool known as Twitter, of people wishing me dead. “Hurry up and die already! . . . DO US ALL A FAVOR AND JUST CURL UP AND DIE !!!!!!!!! . . . With any luck at all Milback [sic] will succumb. . . . just see a dr. You know, Dr Kevorkian.” Dozens of Trump supporters delighted in responding by making vulgar references to vaginas, and one wrote to my wife to say it gave him “endless satisfaction” to report that my death is likely.

Then there was somebody under the Twitter handle @deacongfrost: “I HAPPILY KILL YOU.”

Which at the very least does help explain why so many tourists are avoiding the United States.

U.S. tourism officials had been fretting about the possible ‘Trump Slump’ all year, and now government data has confirmed their worst fears: International tourism plummeted during the first three months of 2017. And that sharp decline has cost the industry, and the U.S. economy as a whole, billions in lost spending.

But is of course no joke.

Not when Trump isn't doing that well either... 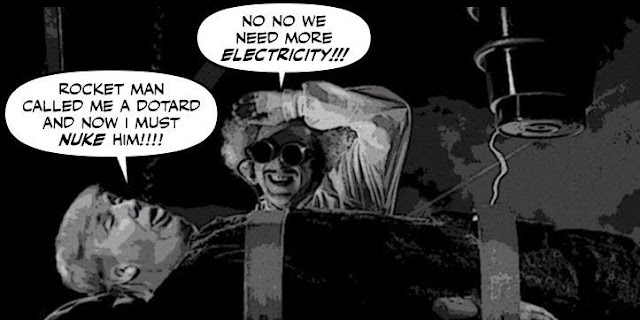 But we are forced to read his Twitter feed to find out whether the world is going to end tomorrow.

And not when we in Canada have our own would be Trump to worry about... 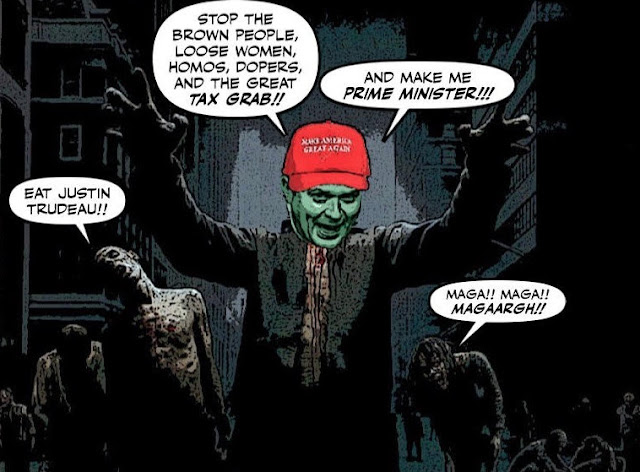 Who might not destroy the world, but would kill this country.

And the question is what are we going to do about it?

As the mental-health professionals sort this out, I’ll be contemplating the many suggestions helpful readers sent in for treating my own Trump-induced illness: acupuncture, Himalayan herbs, vitamin supplements, yoga, flossing, playing with puppies — and the most common suggestion, unplugging from the news.

But while I'm very tempted to go for the playing with puppies cure, alas I have not any.

And I'd probably need a lot of them if the cure was going to work... 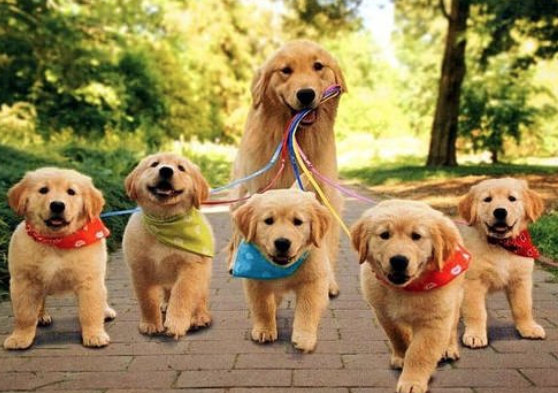 Although this beauty has the right idea... 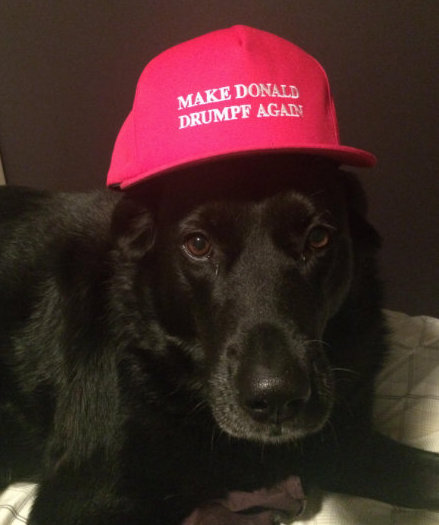 And like him we all know that there is only one way to cure this RepubliCon disease.

Organize, unite, smash those grubby fascists, and bury them once and for all.

But since it's the weekend, and it's going to be 32 degrees in the place where I live, I think I'll just try unplugging from the news.

And try to stay cool, at least until Monday... 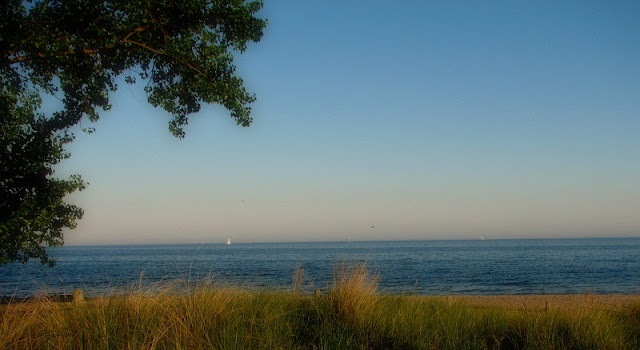 Stay strong. Think how great we're all going to feel when Donald Trump hits the ground with a sickening THUD.

It's easy to deal with it if you simply can get yourself to believe this is all a t.v. show about a deranged president. Then of course at 6 pm I'm reminded its not. Referring to it as the Trump Shit Show does help and then watching Stephn Corbet, Trevour Noah, and Seth Myers before going to sleep buts it all in perspective. Its just a comedy routine, if it doesn't kill a lot of people.

It can be frightening to have an American President constantly threatening to use nuclear weapons. Sort of reminds you of the hardest days of the cold war or the Cuban missile crisis only this time an idiot is in charge.

CNN doesn't help either, with its constant barrage of talking heads. It might be better if the world simply ignored Trump. It would drive him crazy. he needs attention and doesn't care what type it is. just seems like a mentally deranged individual to me.

Destroying healthcare and denying millions any health coverage, dismantling the EPA and gutting environmental and pollution regulations, exploiting and promoting racial conflict, bringing the nation to the brink of at least one war, a war that could quickly expand into something of a regional, if not a global war, yes, Trump is killing Americans and he's only getting started.

It's the Republican way. A new report on the Flint water crisis, for which the Republican government is directly responsible, shows that lead-contaminated water led to an increase in fetal death rates to 58%. Given that Republicans strongly argue that life begins at conception, that constitutes murder or manslaughter by the hundreds. Are they killers? You're fucking right they are.

Frida isn't a puppy but she's a good antidote to this onlslaught of loose feces:

Melania went to the Invictus games this week. I hope she took one look at Justin and decided to defect. She could always send for the boy. Or have him smuggled into the country disguised as a life-size Ewok doll, sent in a breathable Amazon Smile box c/o Rideau Cottage. Or hide Barron at Sacha's house, that'll work. He's a nice guy, he'll take the kid in. Maggie would love him.

Besides, Kim Don Dotard doesn't even know Justin has a brother, and all the better. "Alex Trudeau? Yeah, he does a great job, incredible job on Jeopardy. I bought a vowel from him once. I made a great deal. Terrific negotiations, really good management. He gave it to me on time and under budget." He probably also thinks Prince Harry did a great job, incredible job in that movie about the grand wizard.

Low IQ Donnie, what a dopey clown, losing all the time. Sad.

It's the end of the world as we know it and I feel fine. Time I had some time alone.

Now I'm going to go ignore the news broadcasts and eat a sheetcake while watching Obama in reruns on YouTube.

Then during the commercials I'll switch over to the present-day reality and watch a simulcast of Trudeau's YouTube channel, live-streaming from civilization.

hi e.a.f...as you know my preferred way of dealing with would be tyrants is to make fun of their pretensions, or mock them as mercilessly as I can. But in the case of the monster Trump that is getting harder and harder, since it's not easy to make light of a leader who could start World War III tomorrow. We live in dangerous times and are only a step away from disaster...

hi Mound...everything you say is true, and you might think that most Americans would be able to see the binary choices that face them. But thanks to the nature of the society we live in, and the way Trump is able to use Twitter to distract and deflect, many of them can't see the forest for the trees. Add to that the problem of progressives who spend more time attacking each other, or deciding who is a "real" progressive rather than fighting the real enemy. And who can be surprised by the mess we are in?

hi lagatta...I think Frida is the cutest thing I have seen in a long long time. And I couldn't wait to show the story to Sébastien and ask him, now can we have a dog?????
It's been more than three years since I lost my beloved lab, and I still miss him...

hi anon...yes, it's amazing, Melania, Prince Harry, and Justin were all in my neighbourhood last night. I suppose I could have strolled over to the exit of the Air Canada Centre and held up a big sign "DEFECT!!!!" but there was so much security around, it probably wouldn't have been a good idea... ;)

and now to top it off, he's gone to war with the NBA and NFL. It could be part of the plan. One of the American blogs has a section which is named "5 things Trump did this week while we weren't looking". I think that is the danger of all of this. i.e. Betsy deVos changed the game rules implemented by Obama regarding sexual assault on campuses. Like who noticed? We can only hope at age 71, his time has come. It will not only set the world free but his wife and young son.

In general the Cons are dangerous to ones health but normally Con presidents make a effort to tone it down a little in recognition that they represent all(mostly all ) Americans. Not so with Trump as he does not even pretend to represent all Americans and based on his behavior,lies,flip flops and general lack of knowledge on key issues it is very likely he considers them all expendable in his self-aggrandizing visionary quest. At best Trump is a high pressure salesman although many suspect the deception runs deeper than that. Generally those skilled in the trade operate by dragging in a whole set of irrelevant but emotional data to set the stage, then comes the urgency (sign now or the deal is gone out of my control), then comes the remorse...he didn't tell me it had no brakes. Although Trump has and continues to be a health hazard it is likely we have seen nothing yet as he is still baiting the hook. The urgent "act now or its gone" crisis is still a little ways off but a lot of heads are hurting from the barrage of emotional smoke in the meantime.
RT