Keith Olbermann: How To Save Sidney Crosby From Donald Trump 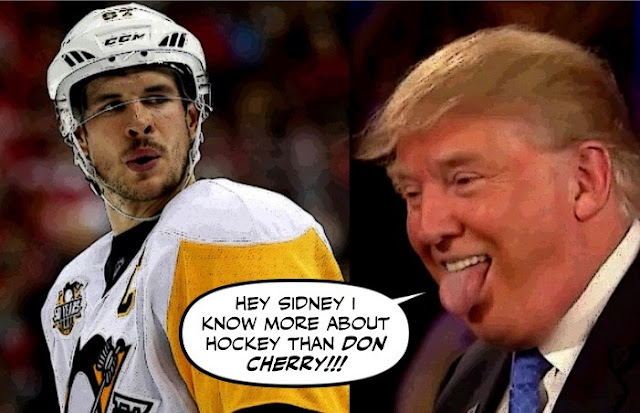 I have been very moved by the sight of all those American football players kneeling in silent protest during the playing of their national anthem.

And refusing to be intimidated by the racist bully Donald Trump.

So you can imagine how disappointed I was to see this. 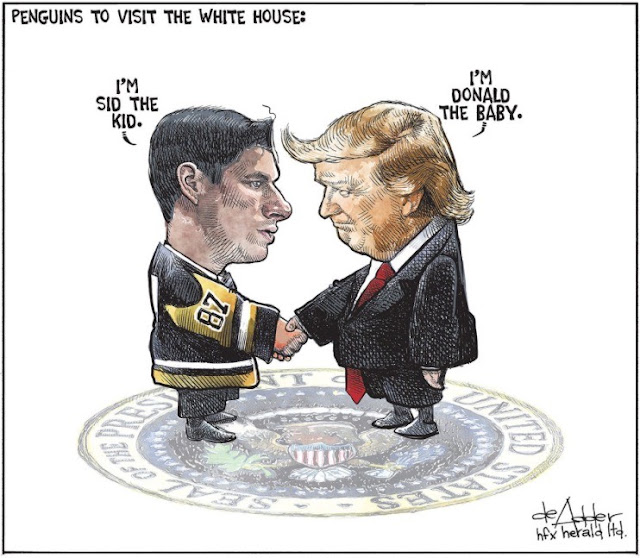 And read that Sidney Crosby wants us all know how proud he is to be going to the White House to meet Donald Trump.

In the wake of dozens of players and team officials around professional sports rebuking President Donald Trump over his condemnation of protests of social injustice, the Pittsburgh Penguins have no problem paying Trump a visit at the White House, and their captain, Sidney Crosby, is on board.

"It's a great honor for us to be invited there," Crosby said, according to Jim Cerny of the Sporting News.

Even though he's been there before... 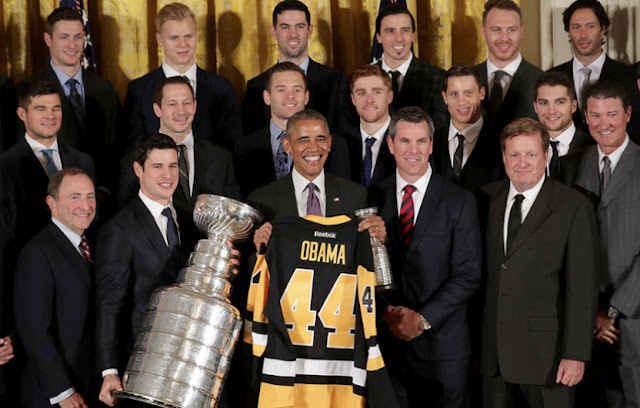 And all he'd get out of another visit is a chance to shake Donald Trump's hand, or kiss his orange ass.

And even though Crosby's hometown of Cole Harbour has a history of racial tension.

So you think he'd know better than to pleasure a bigot like Trump.

But then what do you expect when he plays for the whitest league in the world?

And one of its biggest stars is this loudmouth moron. 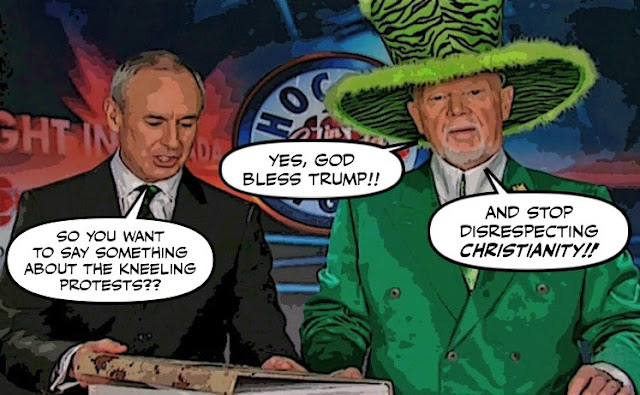 Hockey commentator Don Cherry says media coverage of athletes kneeling during the playing of national anthems has been hypocritical.

Who would blame the media, compare a silent protest for racial justice to a quarterback thanking his godzilla after scoring a touchdown.

The left wing media are true to form. When Tim Tebow the former quarterback of the Denver Broncos went to his knees to thank the Lord, the lefties in the media said he was wrong and it was the wrong thing to do.

The late night leftie talk shows made fun of Tim, to the cartoonists in the paper he was a joke and they made fun of him. It was brutal. Yet the NFL players go on their knees to make a point and they are heroes. The reason they can make fun and ridicule Tim getting on his knees and thanking the Lord is because he is a Christian. No other religion you can make fun of and ridicule… only Christianity. If you are Christian you are open season.

And claim that it was an assault on Christianity, as only he could.

A buffoon who when he isn't sounding like a bigot, or promoting violence on ice, can do a really good imitation of one of Trump's deplorables.

And rarely fails to make an idiot out of himself.

But of course that won't help Sidney Crosby get out of kissing Trump's florid behind, now that he has gone on the record to tell us he'd consider that an honour.

And now that Trump is using him and his team as his hapless political pawns...

So I'm glad to see that super hockey fan Keith Olbermann is offering him and his pathetic Penguins some suggestions on how to avoid that ignominious fate...

You know, I don't think Crosby is a bad person like Don Cherry.

But I think he missed his chance to be more than just a hockey player.

And when he realizes what he's done.

Pretty sure Crosby is going to go down as one of the all time greats regardless cuz guess what? Most people don't like to mix sports and politics. Look at the NFL's dwindling ratings.

Donald S. Cherry rants about the left wing media. He works for the CBC which in Canada is one of the more progressive news agencies yet employs him, Rex Murphy and for years the Bilderberger who would massage Harper's ego, Peter Mansbridge.
Cherry talks about being a tough guy who hates communism and supports the troops yet in 1951 when he was elligible to enlist in the Canadian Army to fight in Korea he didn't. Greg Douglas used to work for the old WHL Vancouver Canucks and remembers Cherry whining and complaining about playing in Vancouver. Douglas also said the Canucks had to bring in Ted McCaskill to fight Portland's Connie Madigan because Cherry was scared shitless of Madigan.
Many of us on the west coast remember Cherry's bad mouthing of Donald Brashear while he played for the Canucks. Brashear's biggest sin besides being black (in some people's little mind) was that after winning a fight he would brush off his hands showing he had brushed off his opponent. This would send Cherry into such a tizzy that I thought Cherry was going to drop the N bomb on TV. Yet his buddy Tie Domi would do a speedbag to mock his opponent after a fight and John Kordic would kiss his fist after a fight and Cherry never said a thing about these "good Canadian kids" disrespecting their opponents. P.K. Subban seems to be a consistent target of criticism of Mr. Cherry's. Gee, I wonder why? I mean calling "Frenchies" and "Euros" cowards for wearing visors isn't racist, is it? No one should give a flying fuck what Donald S. Cherry says, the man is a racist and a phoney.

You hit the nail on the head in your examples of the racist, loud mouthed arsehole.
JD

Crosby most likely sees himself as a millionaire hockey player and he is going to the W.H. For him its most likely not political. He's gone before and he's going again. Its his right. We may not like it, but if he and his team want to go, let them and the rest of us can shut up.

Hockey is mostly made up of white players and historically a white and in B.C. Punjabi audience. We might also consider the greater part of hockey is made up of Canadian players, who don't have much to do with American politics.

So you're the self-proclaimed judge, jury and executioner? Can't even work out that Trudeau is an utter fake and a complete disappointment to progressives. Blind as a bat you are. You look out of a pair of giant horse blinkers and it all makes sense to your tiny-minded version of what's right and wrong. Tunnel vision supreme and vitriolic with it.

I'd suggest to you that being Canadian yet working in the US, Crosby and many others are in a much more difficult position than you are blaring away mindlessly. It's one thing for the citizens of a country to protest the dumbfack nitwit who is their president, quite another for a foreigner to tell him to piss off. Americans of all persuasions tend to react badly when someone from another country criticizes their institutions, no matter how much they may agree. They see it as THEIR business, not some Canuck like Crosby working in their country.

I can imagine the conniptions you'd have if some US player in the NHL or CFL living and working in Canada, decided that fack it, I don't like that pantywaist Trudeau, and bugger it, I'm not going with my team to meet the PM at some function or another. Squawk, squawk, squawk, why you'd be riding your high horse for months, you hypocrite.

I'll correct myself. Cherry worked for the CBC until Harper gave away HNiC to SportsNet in 2014. It still doesn't change him being a racist or a phoney. Or a liar. The left wing media is a myth created by right wing wackos who claim they are countering something that doesn't exist with their lies, hate and bullshit.

hi anon...I'm sure Crosby will be remembered as a great hockey player, but there's more to life than just being an athlete or whatever. And I believe that Crosby will do his legacy no favours by visiting Trump's White House. As for the NFL's dwindling ratings, it's not clear that they are dwindling, and if they are it almost certainly has nothing to do with the protests...

Hi Mr Perfect...thank you for your most interesting comment and all those historical details I had never heard about. I began to loathe Donald Cherry when I saw him promoting violence to sell his hideous videos, and because of the way he was always putting down French-Canadian and European players. And of course, the disgusting way he supported the grotesque bigot Rob Ford was simply sickening. I will never understand why the CBC employed him. But then I suppose I shouldn't be surprised when they also employ Rex Murphy...

hi e.a.f... well he is a millionaire, and he is Canadian, but I thought he was tone deaf to declare how proud he was to go and see Trump, at a time when many black athletes are being vilified by Trump and his supporters, and considering what has happened in his hometown of Cole Harbour. A missed opportunity, let's call it that...

hi BM...I had no idea you felt so strongly about it, and please get a grip on yourself. I did not suggest that Crosby should get on a soapbox and start mouthing off at Trump.
I merely suggested that he could have found an excuse to not go to see Trump, and avoid the situation Wayne Gretzky found himself in when he went to see Stephen Harper. Which by the way he now regrets...