The Cons and the Big Fake Tax Scandal 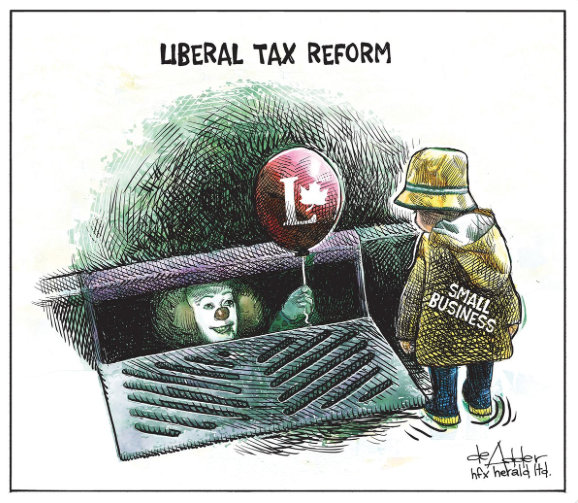 Michael de Adder is one of my favourite Canadian cartoonists, a guy I admire a lot even if I don't always agree with his political views.

But sadly this cartoon is both disappointing and appalling.

Not just because it demonizes an attempt to make taxation fairer in this country.

But also because like so many other Canadians, de Adder doesn't know what he's talking about.

It isn't a new tax, it is just an attempt to close tax loopholes, that should have been fixed long ago but weren't.

And all de Adder is doing by portraying these tax changes as monstrous, is contribute to the prevailing hysteria.

Canada has the lowest small-business tax rates in the G7, without much competition. You wouldn’t know it, from the fire and fury that has been aimed at Prime Minister Justin Trudeau and his Finance Minister Bill Morneau.

The Canadian Medical Association has threatened that doctors across Canada could stop practising. The Canadian Federation of Independent Businesses has promised the changes will “harm every Canadian small business.” Conservative Party leader Andrew Scheer calls it a “tax grab,” that will hit farmers hard. At a townhall in Kelowna, angry high-earners heckled the prime minister as he tried to explain the changes.

Help the rich wage war on the rest of us.

The government, and a phalanx of economists, have contended that the changes are merely about “tax fairness” and that the changes only target specific practises from the top 10 percent of earners in the country.

Threaten both the economic health and the social fabric of this country.

These tax loopholes could be pillaging tens of millions from the federal coffers, and further extending income inequality in the country.

And of course give Andrew Scheer another excuse to attack the Trudeau government for no good reason, and as only a Con can... 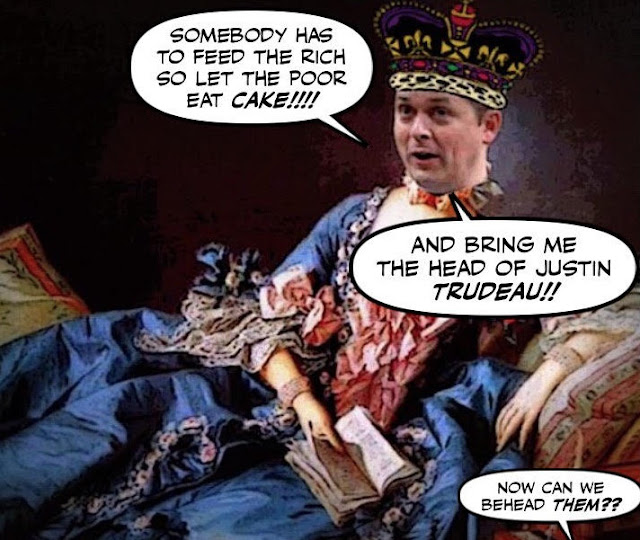 For does anybody seriously believe that Scheer and his Cons would defend the interests of the poor over those of the rich?

And does anybody seriously believe that the ghastly Pierre Poilievre knows what he's talking about?


Liberals refused to call a meeting to discuss #unfairtaxchanges. So I’m calling one for next Thursday in #Ottawa: https://t.co/n6m05KKPnP
— Pierre Poilievre (@PierrePoilievre) September 7, 2017


Or has anything useful to contribute, or any credibility left. 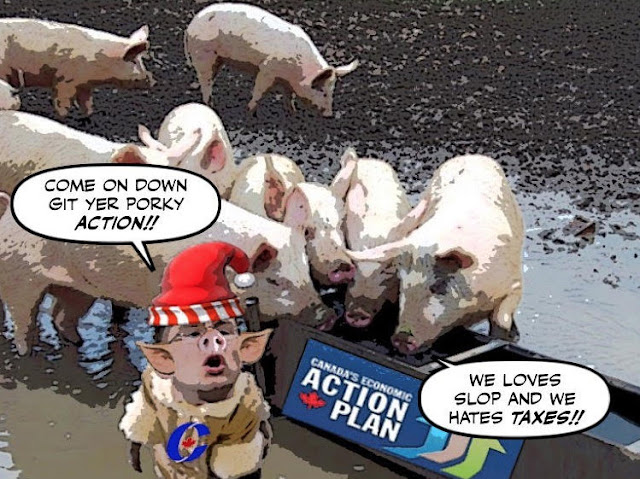 Does anybody NOT believe that our bought media is hyping this sham story to please their corporate bosses, and try to bring the Con hogs back to power?

And since when did those working for tax fairness start being portrayed as bullies? 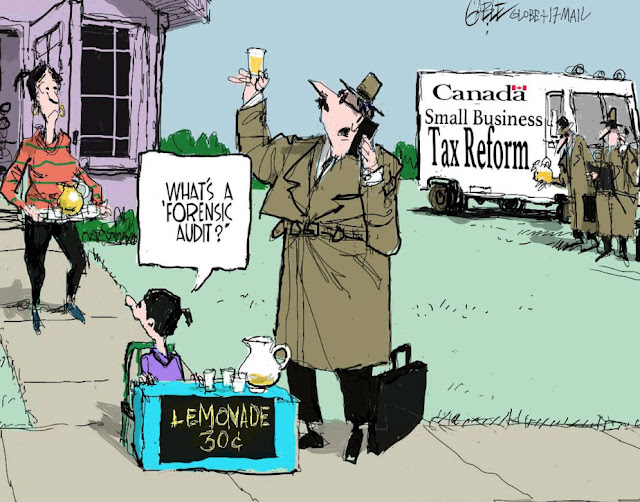 And those trying to dodge taxes being portrayed as helpless victims.

Lordy, It's depressing to see how ignorant some Canadians are, and how easily they can be fooled. But there is some good news.

When more Canadians understand what is really going on, closing tax loopholes will almost certainly be, as Heather Mallick suggests, a sure vote winner.

Finance Minister Bill Morneau’s “tax fairness” move to close loopholes, including the shameless ones with feathers and sequins, are more popular than many realize.

It should worry the complainers that most Canadians with jobs, where taxes are pre-deducted at source, had no idea this was allowed. They are not just annoyed, they are incandescent.

By infuriating all those who don't have the money or the resources to take advantage of those juicy tax dodging loopholes.

And making the grubby film-flam man Andrew Scheer look like a Con artist, or a stooge of the one-percent... 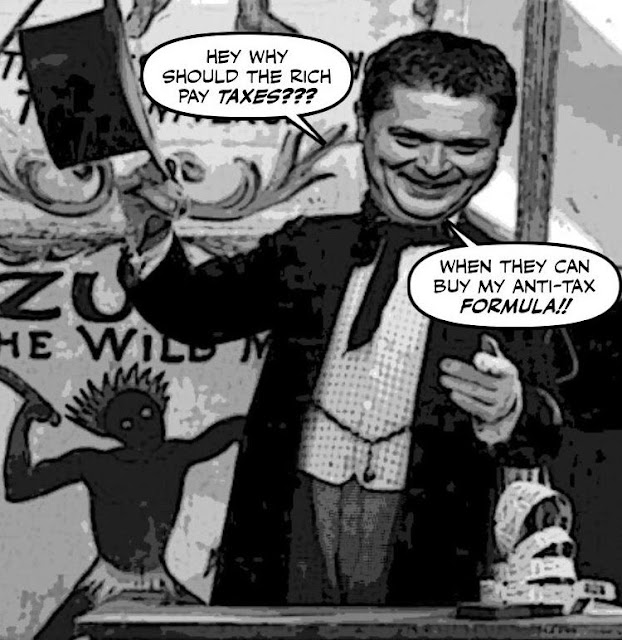 You know, too many Canadians now have a problem with taxes like they never used to have before.

And they better get over it, or they will end up living in a shabby shrunken country with not enough money for anything; no social services, no pensions, no medicare.

And end up dying in the squalor they deserve... 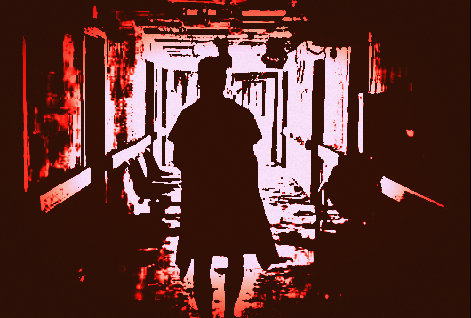 But luckily this hysterical tax controversy is a double edged sword.

And if the Liberals wield the knife well, instead of just waving a spoon.

It could get bloody.

And it may yet kill the Cons...

This is definitely a horrible tax grab—the Harper government had the right idea, audit all those filthy rich bartenders and serving staff with the off-shore bank accounts and make them pay up. Today bartenders, tomorrow panhandlers!

I have not been following the hysteria very closely but it seems like a good policy overall though it may need a few tweaks once the consultation period is over. Then this can be true for any draft legislation.

It's good and fair policy and hopefully just the beginning. The idea that Bill Morneau of all people is waging class warfare is amazing. He's just a smart and fair dude.

Lost in the Con con is the fact that the majority of small business people do not use corporations to avoid paying tax. Not all doctors are incorporated . Changes will deal only with those willfully avoiding paying and leave the rest unmolested.

It's important to know that many cartoonists are incorporated so what they have to say about this tax dodging scam should be taken with a grain of salt. They're only damaging their own credibility.

So much pearl clutching being done by The Establishment in the past two weeks. Hope Trudeau sticks to his guns ... if this shift in policy is going to devastate your business (and I've seen the numbers), you were already skating on thin ice aka you did it to yourself.

Yes its true that insufficient tax revenue can paint a bleak future but its also true that inefficient governments combined with special interest lobbyists can also paint a bleak future. At present Canada has a balance between the two but small business help keep governments and big business honest by providing alternatives and rightfully alarm bells should ring and any moves thoroughly vetted when changes are made.Unfortunately in this case its the Cons who are in themselves a special self interest group that are doing the vetting. The Liberals are usually a little smarter on sensitive issues and could have provided a small carrot to the honest majority of small business owners while taking a stick to the cheats. Granted its an emotional issue as most small business owners will never get to sprinkle income anywhere but that doesn't make it less an issue.

I am sure there is a good explanation other than cherry picking but how can a private medical practice with the additional business overheads make obscene profits that have to be sheltered when the government is providing patients with the same services for free? Seems that we have our choices; we can fund inefficiency with our tax dollars or get faster service by funding tax avoiders with a little extra out of our pocket... some choice.
RT