Donald Trump and the Deadly Threat of Hurricane Mueller 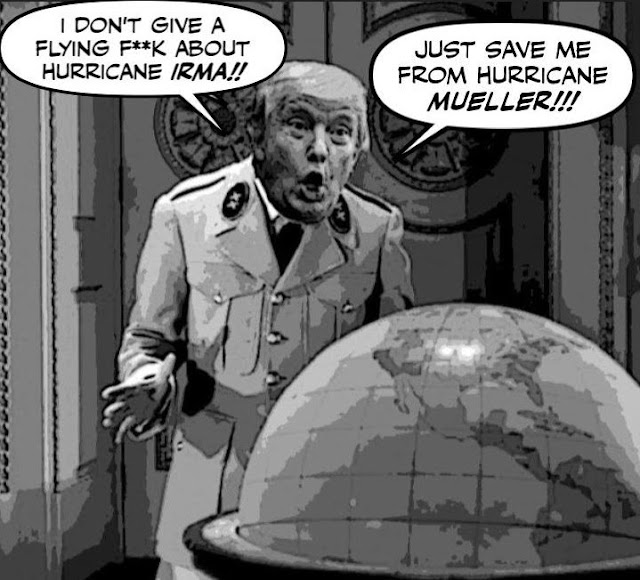 As you can imagine, Donald Trump has so many things to worry about these days.

What with Hurricane Irma threatening to engulf the state of Florida

And the Hispanic Hurricane Jose following so closely behind.

But of course the hurricane he's really worried about is Hurricane Mueller. 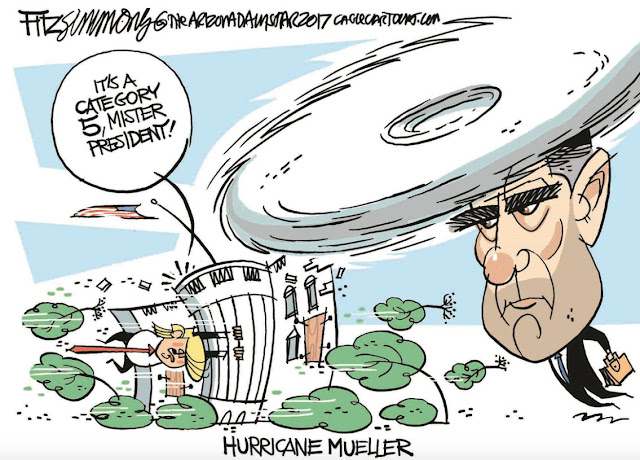 Because it's now threatening to engulf the White House.

Special counsel Robert S. Mueller III has alerted the White House that his team will probably seek to interview six top current and former advisers to President Trump who were witnesses to several episodes relevant to the investigation of Russia’s meddling in the 2016 election, according to people familiar with the request.

Mueller’s interest in the aides, including trusted adviser Hope Hicks, former press secretary Sean Spicer and former chief of staff Reince Priebus, reflects how the probe that has dogged Trump’s presidency is starting to penetrate a closer circle of aides around the president. 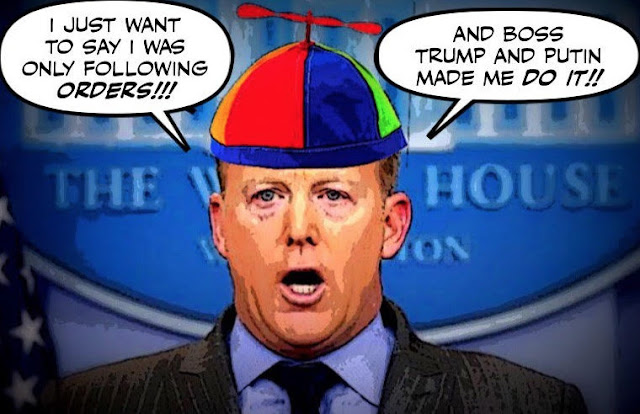 Or whether Trump will be charged with obstruction of justice, or treason, or both.

And to make matters worse some of his own rabid base are now accusing him of being a traitor.

After Trump ran off with their arch-enemy Nancy Pelosi... 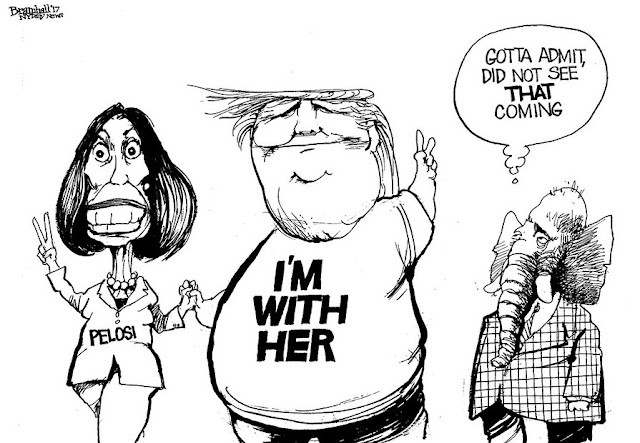 Which is not only their worst nightmare.

It is the scenario that President Trump’s most conservative followers considered their worst nightmare, and on Wednesday it seemed to come true: The dealmaking political novice, whose ideology and loyalty were always fungible, cut a deal with Democrats.

It has some of them on the verge of revolt.

If Mr. Trump’s agreement with the two Democratic leaders, Senator Chuck Schumer and Representative Nancy Pelosi, to increase the debt limit and finance the government for three months did not yet represent the breaking point between the president and his core, hard-right base of support, it certainly put him closer than he has ever been to tipping his fragile political coalition into open revolt.

As you can see by reading some of the comments at the ghastly Breitbart.

And goodness knows what Breitbart's sinister master, Steve Bannon, must be thinking... 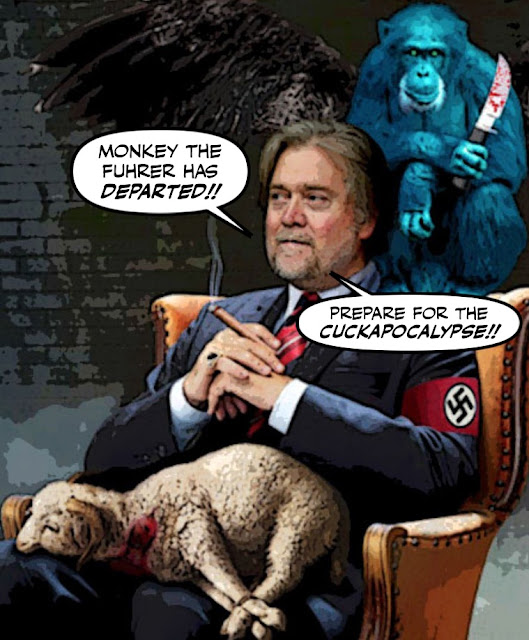 But you can be sure it isn't pretty.

Although who really cares what Bannon thinks as long as Trump is leaving the GOP in a shambles?

As former Mississippi governor Haley Barbour indelicately put it, Donald Trump was elected to give Washington "the gigantic middle finger." It's what the rabble, the great American unwashed, wanted – and it's what they have.

The problem is that Mr. Trump has been extending the middle digit to his own party.

And threatening to destroy it.

Large numbers of Republicans would dearly love to desert their leader. The Robert Mueller inquiry into election meddling by Russia could give them an opportunity. But if provoked by signs of rebellion, it is not inconceivable that Mr. Trump would split with the party and run under a new conservative banner. That's a development that, while not reducing it to two seats, would kill the GOP.

And while watching Mueller slip handcuffs on Trump is something I will savour for the rest of my life.

Watching his own supporters destroy him could be even enjoyable... 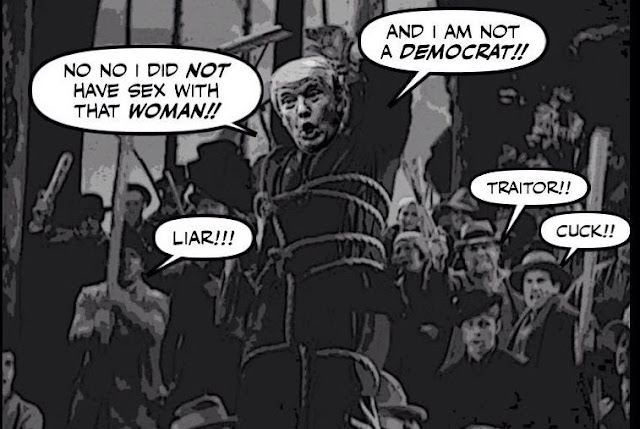 Golly, I love the smell of the Republican Party burning in the morning.

Now isn't that a pleasant thought?

Have a great weekend everybody...
Posted by Simon at 7:40 AM

Labels: Donald Trump, Nancy Pelosi, Robert Mueller, The Death of the Republican Party, The Rise and Fall of the Orange Oaf

There is a comment in there about the Orange One and the Wall.

Don't forget about the one following José: Hurricane Katia. Fitting that in a season that also included Tropical Storm Don (which, like its unintended namesake, fizzled out like an empty bag of wind), there's one hurricane that's Hispanic and another one that's got a Russian name for "Catherine" the Great. Katia already made landfall in Mexico as a Category 1, but her impact was multiplied by the after-effects of Harvey and the simultaneous 8.5 earthquake. Malia Obama was on a humanitarian aid trip down there, but was successfully evacuated and is doing fine.

There's already a petition circulating the web, asking the NOAA to retroactively change the name of Irma to Ivanka, José to Jared, and Katia to Kellyanne. But as if that wasn't serendipitous enough, the next names on the list -- how about this -- are Lee (as in Robert E.), and Maria (HAIL MARY!!!)

It's almost like the universe is mocking us. Which makes me think that a Hurricane Justin wouldn't do much else but kick up purple haze in California and rain buckets of good will all over the heartland. Followed by at least eight years of Sunny Ways and a Care Bear Stare during a solar eclipse. :)

MSNBC's The Rachel Maddow show was not only the most watched program on cable news for August. It was also the most watched show on all of basic cable, which means that more people are watching Maddow than are watching sports and entertainment on basic cable.
http://www.politicususa.com/2017/08/31/rachel-maddow-bigger-news-watched-cable-show-august.html

All of Trump’s Russia Ties, in 7 Charts
http://www.politico.com/magazine/story/2017/03/connections-trump-putin-russia-ties-chart-flynn-page-manafort-sessions-214868

50 ideas blowing up American politics (and the people behind them)
https://www.politico.com/interactives/2017/politico50/

A preview of when Trump is called to testify...

He will be indicted for obstruction soon for the firing of James Comey. Treason and espionage to come later.

hi anon...that's a good start, now on to Mar-a-Lago. If Hurricane Irma can't do the job then let Hurricane Jose finish it off. Just the thought of a hurricane with a Spanish name must be making Trump tremble...

hi anon...thank you...I'm a little depleted these days, the end of summer always has a bad effect on me. But thanks to that great cartoon of Hurricane Mueller, I had fun writing this one...

Anyone taking the Facebook buy story seriously should take a step back. Even if its true, it was a $100,000 buy over a year that got less than 1000 clicks. The only Russian Trump is in bed with is the Ruble. Considering not one Banker was charged for anything in the collapse of 2008, does anyone seriously think Trump will be charged with money laundering?

On the other hand a Hard Rain is going to fall. What happens when the printing press breaks?

hi jrk... Thanks for the link. I liked it so much I decided to use it for my next post...

hi anon...thanks for this great comment. Although the thought of Hurricane Kellyanne is really scary. However if anyone can bring down the White House from the inside she can, and Viva Maria !!!
Honestly, when Mother Nature gets annoyed she doesn't kid around....

hi David...thanks for the links. When people visit this site they don't just get entertained they get INFORMED. Although I must admit I especially liked the video of Curly taking the stand... ;)

hi anon...that's OK I can be patient. Sometimes. As long as when he is finally convicted of treason, I can be invited to witness his execution...