Why Andrew Scheer and His Cons Have No Future 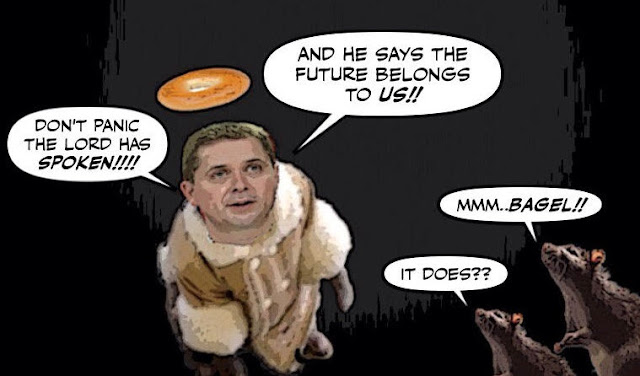 Ever since Andrew Scheer was chosen as the new leader of the Harper Party, I've been trying to explain to the few Cons I know, that they've made a terrible mistake.

Trying to explain that by choosing a religious fanatic who would criminalize women, marginalize gays, and ignore climate change, they haven't just lost the next election. 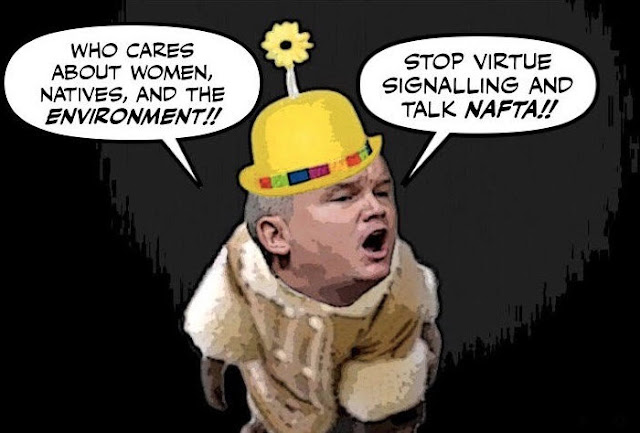 For when the Con clown Erin O'Toole demanded that the Liberals stop "virtue signalling" on gender, indigenous, and environmental issues at the NAFTA talks, he couldn't have summed up that mistake better.

So I'm glad to see that at least somebody in the MSM is finally asking the obvious question:

Have the loser Cons learned anything from losing? 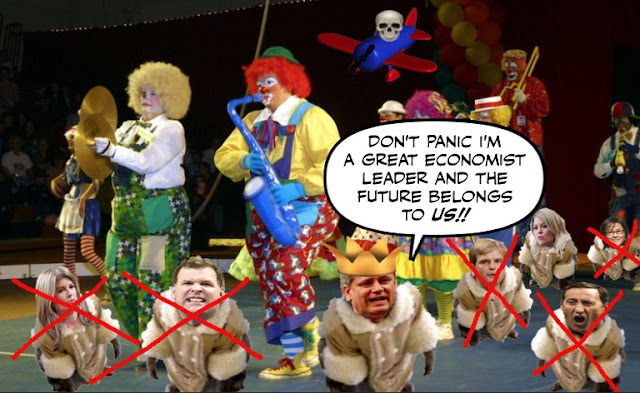 O’Toole’s chicken hawk routine is as clear an indication as any that the Conservative party remains stubbornly rooted in its recent past. By dismissing environmental issues as “virtue signalling” — a common epithet employed by the right — O’Toole is attempting to diminish the environment as a political issue, just as the Conservative party itself attempted to feminize and diminish Trudeau before and during the last election.

Do they understand that the problem is generational? 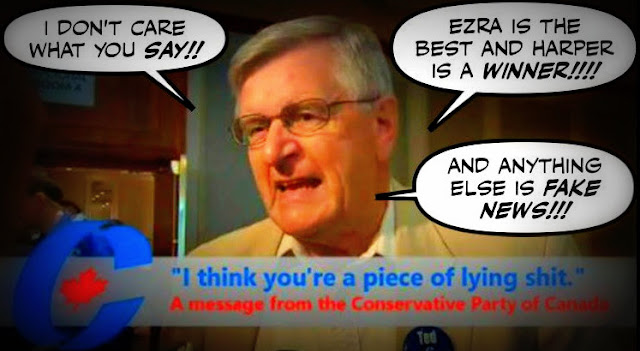 Shortly after the 2015 election, as the Conservative party wrenched itself from a stinging electoral loss to a divisive leadership campaign, the polling company Campaign Research looked into the roughly 100,000 paid up CPC members. These members tended to be white and overwhelmingly male, with an average age of 66.

And that by pandering to that older demographic, the Cons are all but committing suicide.

There are obvious demographic downsides to playing to the myopia and petty fears of roughly 100,000 Baby Boomers — and not only because they are literally dying off. With an average age of 39, Canadians are decades younger than the average Conservative party member.

Or dying of ignorance...

A Canada-wide EKOS poll last year found that a 39-year-old Canadian likely supports stricter environmental regulation and is sensitive to the plight of the country’s Indigenous population. Addressing these concerns may well be “virtue-signalling”, as O’Toole said, but it’s also a canny extension of retail politics — a way to ensure your party doesn’t grow old.

Now I know that some Canadian seniors are as progressive as they come, and that some younger ones are Cons or slackers.

But in the next election millennials will form the largest voting bloc, and when it comes to values the Great Divide couldn't be clearer.

And not just here, but also in other countries like Britain. 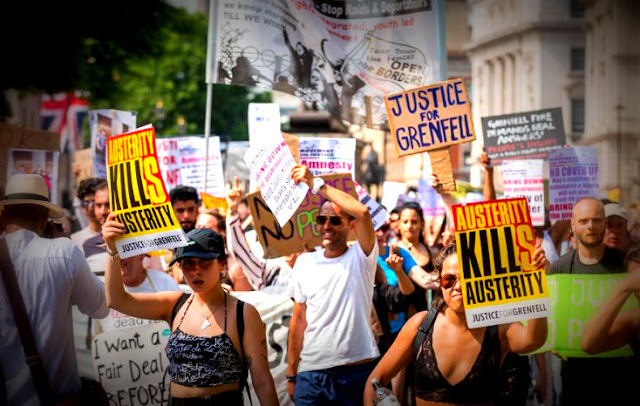 New polling that has been undertaken by ComRes for UnHerd suggests that the values of millennials and the post-millennial Generation Z could hardly be more different from those held by their grandparents.

Where polls also show that the young have markedly different views than older Britons on everything from crime to foreign policy to religion.

Three-quarters of older Britons agree that we should have more Christianity in the nation; some 61% of 18- to 24-year-olds want less – from churches they rarely attend, and which, through the prism of news, appear to be trapped in outdated attitudes towards women and gay people.

In that country the Cons are still trapped in the legacy of the ghastly Margaret Thatcher.

In Canada the Cons are still living in the shadow of the monstrous Stephen Harper... 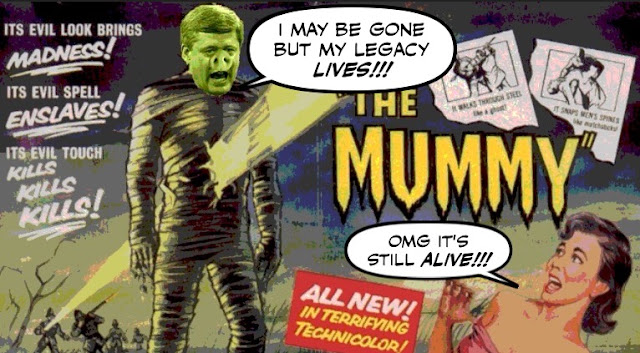 Though Conservatives rid themselves of their leader in 2015, they have yet to move beyond the shadow of his legacy, or the cloistered confines of the party faithful. Instead, by clinging to the same rhetoric and mindset that lost them the election, they are damning themselves to more failure.

There is nothing the Cons can do about it, time marches on, demographics is destiny.

And these were the losers they had to choose from... 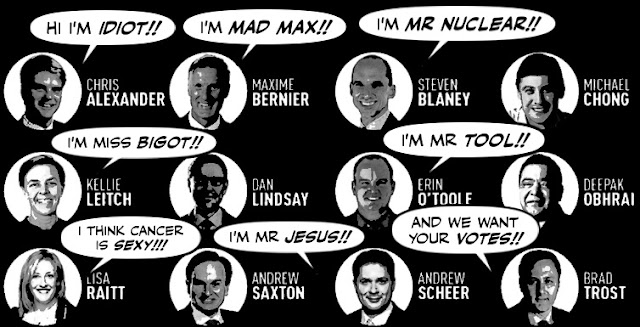 So they never had a chance.

But Andrew Scheer embodies all the things millennials hate the most. And him and his Cons are going to pray pay for that big time.

Harper may have brought them down.

But Scheer will bury them alive... 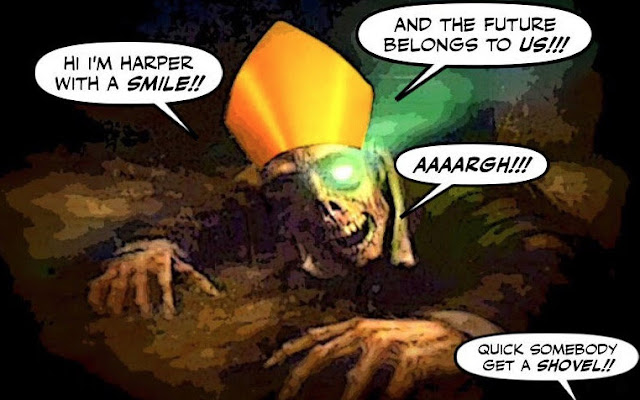 While I certainly agree with you about the Cons, and their dead-end route into religious fundamentalism - which doesn't have the same audience anywhere in Canada (even the Prairies) as it does in the US Bible Belt, I think one must be very careful about generational analysis. I'm a boomer, and scarcely into puberty was protesting war and racism. Yes, many people of my generation have sold out, but not all of them (by the way, here in Québec boomers are practically all rabidly secular, to such an extent that they are intolerant of any religious dress or signs - at the funeral of a great labour leader, some old friends from the labour movement were making jokes about how uneasy they were to be inside a damned church)... There are no guarantees that the younger generation will remain progressive - though I think a secular outlook and refusing such archaic bigotry as homophobia will remain.

Please remember that there are boomers who have never sold out and who never will.

Jeebus, the average Con is 66?! When they were young, nobody had even heard of a hijab. Fine dining was roast beef with a choice of baked or mashed potatoes. Spaghetti was daring ethnic food made by swarthy garlic-eaters fresh off the boat from Italy. No wonder these guys are scared of their own shadows!

hi lagatta...relax, Simon's Army accepts and encourages people of all ages, so you can serve until you are 120 if you wish. ;)
As I said in my post:
I know that some Canadian seniors are as progressive as they come, and that some younger ones are Cons or slackers.
But millennials are the most progressive generation in human history, so stop moaning and start celebrating...

hi anon...yes I was a bit astonished that their average age is so high, but I find that very encouraging. For they will never expand beyond their base if they can't do better than that. And Scheer will certainly not be the one to lead them to the Promised Land...

But is that the mean age or the median age?

It would be interesting to see the plot of the distribution. It bet it is heavily skewed to the right.

The same thing is happening in the U.S. Most millennials don't support Trump, and his attack on the so-called "Dreamers" is only going to motivate even more of them to vote against him in the next election.
P.S. I love Scheer's bagel halo but wouldn't a donut be more appropriate?

I don't think it matters as long as it's Holey :p

Nonsense talkers have no nuance blockers that can make them communicate to the Canadian public accurately. The curse of PET.

I am with you, secular, progressive proportional representation is the future. First past the post is the political equivalent of genital circumcise.

While its true the Con's retro religious base is shrinking the mindset is not. It becomes a question of how they transition from religion to something else that glues their community together. It seems that hate for Trudeau,Liberals and Muslims combined with infusions of fear are the drugs that makes the journey bearable but the final destination still seems somewhat confused. Some are comfortable staying wrapped in an evangelical shroud while others prefer ethno-nationalism as the final destination. Harper made his choice but Scheer and co seem to be taking a step back to the comfort of the God umbrella. Digression from the Harper plan should fragment the party and let the rest of us get on with living the opportunities and challenges that the future holds. Hopefully by following a path that leads to more individual and social enlightenment rather than one that leads to a hate filled swamp.
RT

Same with the American cons. The average age of the Fox news demographic is 68. Their biggest household market for ratings is convalescent homes and medical offices. Granted this certainly doesn't speak for all boomers (who, after all, were the generation that protested against the Vietnam War, with some even going to Canada and starting homes and families there, "teaching their children well" as Crosby, Stills, Nash and the great Canadian Neil Young once said). But the data is clear: the majority demographic of old-saw conservatism tends to skew primarily in favor of aging white retirees.

That most of them have, indeed, "taught their children well," tells me too that outliers like Milo Hitlerpotamus from Breitfart and the Nazi punks at Deplorebel Media like Lauren "Dixieland North" Southern, Faith "Praise Lord Trump" Goldy, and Gavin "Proud Master Baiter" McAnus have no future either.

hi anon...yes, as I told lagatta I'm not blaming all boomers, far from it. Some of them are the people who inspire me the most. And there is no music like the music of the late sixties and the seventies ;) But there is a growing generation gap when it comes to values, and we need young and old progressives to unite if we are going to change the world...

hi anon 2:29...yes that's true, the media hasn't mentioned the generational side of that story. But when young people see their friends being deported their hatred for Trump and his racist thugs will know no bounds.
Now as for the question of the bagel or the donut....I must say I thought of using a Krispy Creme donut since Scheer is more American than Canadian, and maybe I will next time...

hi Steve...could you please elaborate on this, as I'm not quite sure what you mean. Why must you write in code, and why do you hate Pierre Trudeau???

hi RT...what I am trying to explain to people is that Scheer is a real religious fanatic, a member of the so-called Catholic Right. And for him politics is just a way to serve his Godzilla, way ahead of the Canadian people. And the Con party has resembled a religious organization, albeit a debased one, from the days Stephen harper was its Lord and Master. It depends on wedge issues where the Cons target a particular group, and try to make others believe they are superior to them. Which is one of the reasons I am an atheist. Unfortunately though, the desire of some humans to feel superior to others so they can bully them and even kill them, is a bestial relic of our monkey days. So it will take a while before the last religious fanatic croaks. But until that happy days arrives, we can use their bestiality against them....