Why I Support the Struggle of the People of Catalonia 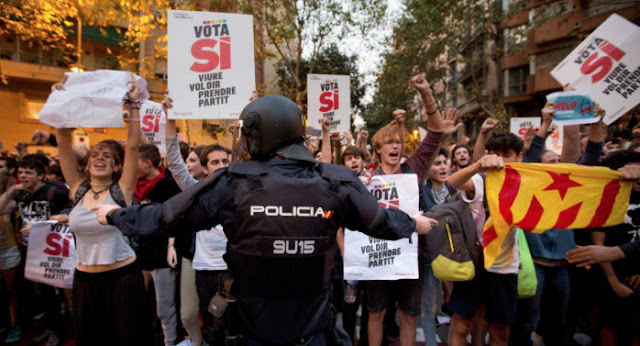 It's hard to believe it's happening in Europe, and in an ostensibly democratic country like Spain.

But just as the autonomous region of Catalonia was planning to hold a referendum on whether or not to secede from Spain, the Spanish government has tried to block it by arresting some separatist leaders.

The Spanish police detained more than a dozen people in the region of Catalonia on Wednesday, drastically escalating tensions between the national government and Catalan separatists. The episode occurred less than two weeks before a highly contentious referendum on independence that the government in Madrid has vowed to block.

And stealing the ballots.

Only to reap the righteous wrath of the Catalan people. 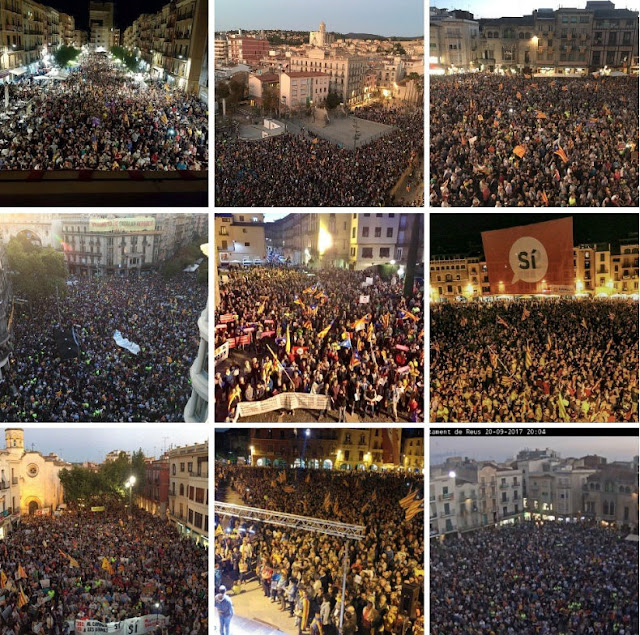 Who it seems are still determined to vote in that referendum, and are sending out this defiant message.

After three centuries under Spanish rule, on Oct. 1, citizens of Catalonia will finally have the chance to exercise their right to self-determination.

In stark contrast to the governments of Canada or Britain, Madrid has refused to accept this democratic challenge, and has opted instead for the path of authoritarian repression.

Four decades after the death of the dictator Francisco Franco, we still find that authoritarian instincts rule at the heart of the Madrid government. Respect for minorities is a fundamental human right, and the right of self-determination is an irrevocable right of all nations.

Which doesn't surprise me in the least, for the Catalans are a proud people with their own distinct language and culture, and a long history of resistance.

In 1940, their exiled president Lluis Companys was handed over by the Gestapo to the fascist regime of Francisco Franco, who jailed him in a Nazi-style prison. 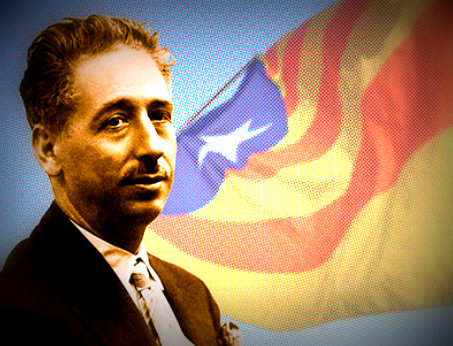 He was held there for five weeks, kept in solitary confinement, tortured and beaten, while senior figures of the Franco regime visited his cell, insulted him and threw coins or crusts of bread at him.

After a military trial which lasted less than one hour, lacking legal guarantees where he was accused of ‘military rebellion’, Companys was executed at Montjuïc Castle in Barcelona at 6:30 a.m. on October 15, 1940.

Refusing to wear a blindfold, he was taken before a firing squad of Civil Guards and, as they fired, he cried ‘Per Catalunya!’ (For Catalonia!).

Companys asked to die barefoot, so his feet could touch the soil of his beloved Catalunya.

And is forever remembered by his people... 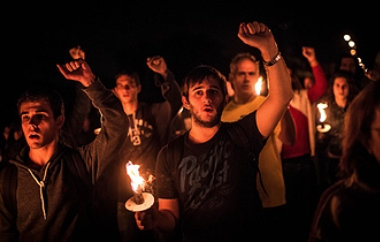 I first met some Catalonians during the Scottish independence referendum campaign three years ago.

When they turned up in Scotland to support the YES campaign... 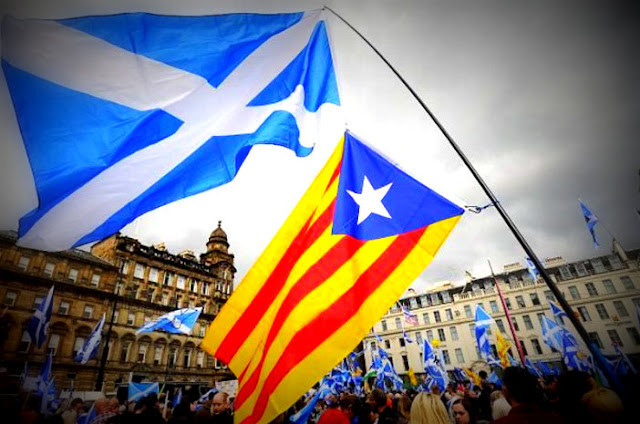 And with their friendliness and their enthusiasm charmed many Scots into supporting their SI campaign... 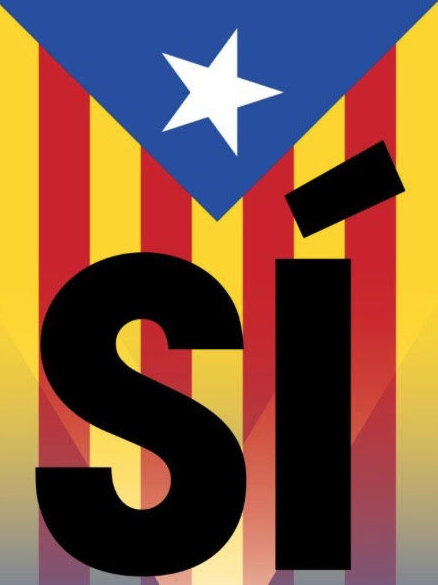 And ever since, the two groups have had a very special relationship...

Which I both admire and support.

So all I can say to the right-wing fascists in Madrid, is good luck trying to put down a people with a proud spirit like this one...

Down with the Franco fascists.

If you're not aware of it, you might be interested in "From blantyre to Barcelona" a CD of "Original songs written and performed by the Lanarkshire Songwriters Group to commemorate the International Brigade's struggle against Spanish Fascism and those from Blantyre and Lanarkshire who fell in the struggle". I learned about this story only after hearing the song "Jamie Foyers" by Ewan MacColl and googling for more info. It's a great song!

A nice man at UNISON mailed the CD to me in Canada and I'm sure they'd still do that - or if you are ever in Blantyre you might get one there.

But you can listen to the songs here: https://www.youtube.com/playlist?list=PLUbD_gb6eGbNmwhoBCO8UBb8cGByUTiIU

Here are a couple of other links:
http://www.lanarkshiresongwriters.co.uk/projects/from-blantyre-to-barcelona/

Spain is one of those countries in which not much changes however long since their fascist years. Spain has a history which never leant itself to democracy. We ought to remember how they treated those in South America and Mexico. Not much changes, just the dates and names.

I read a story somewhere that Messi was threatening to leave the Barcelona football club if Catalonians vote to separate. So that should be the end of that.

Footballers don't all have sterling records in support of democracy. That was also the case under the Argentine dictatorship. Often they come from poor or working-class backgrounds, but they are making huge salaries and sponsorship deals unheard of among most young men with relatively little education.

Hi Martin...nice to hear from you again, and thanks for those links. I've been playing some of those songs all morning, and may have to shoulder my guitar again.
And needless to say I share this sentiment:

He lies by the Ebro in far away Spain,
He died so that freedom and justice might reign;
Remember young Foyers and others of worth
And don't let one fascist be left on this earth.

Scotland never ceases to surprise and inspire me. On my last visit I came across a framed copy of an amazing poem in a museum in the small town of Fochabers. It was written by a young RAF pilot from London, Ontario, during the Second World War shortly before he was killed. The next time I'm going to grab a photo of it and bring it back to Canada...

hi e.a.f...I like Spain a lot, and their food ;) And they are very slowly coming to terms with the Franco years. But this heavy handed action is very unfortunate, and since it seems like the Catalonian independence supporters were about to lose the referendum, makes no sense whatsoever...

hi anon...yes I saw that, and my heart sank since I am a big fan of his and his Barcelona team. However, that story has not been confirmed, and I doubt Messi would get involved in such a controversial situation.

hi lagatta...well that's true. Once millionaires they tend to think like millionaires, and several of the biggest stars in Europe are involved in cases accused of dodging taxes. Still, his Barcelona club has been a firm supporter of the referendum, and he owes them a lot. They brought him to Spain when he was a young teenager, and paid for expensive treatment for his growth hormone deficiency., which he never could have afforded if he had remained in Argentina. And if he hadn't received that treatment he wouldn't be the big star he is today. I understand and respect those who don't want Catalonia to become independent, but what we are talking about now is the democratic right to hold a referendum...

Yeah, overall I like Messi. He is brilliant on the field and hell, I'm even shorter than he is! Good thing I'm a woman, and older than he is. So many short kids admire him. I'm just thinking of Messi playing between the legs of say, the Dutch.

Indeed, it is a matter of democracy, not whether one is yes or no.