The Day Donald Trump Blew Up His Own Base 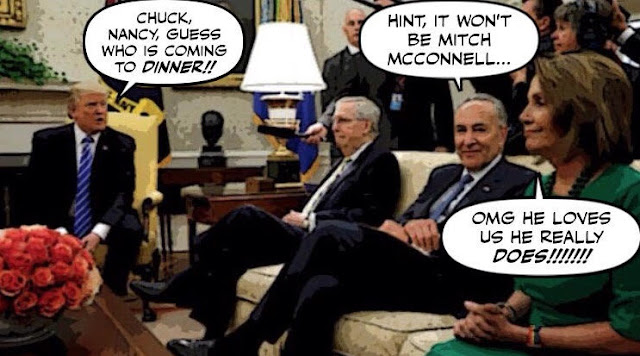 In one of my last posts I looked at the budding menage-a-trois between Donald Trump, Nancy Pelosi, and Chuck Schumer.

And how it was making many Republicans really nervous.

Well last night Trump invited Chuck and Nancy to have dinner at the White House.

And for many Republicans it must have looked like the last supper.

With Trump playing the role of Jesus AND Judas, and betraying the once Grand Old Party.

Democratic leaders on Wednesday night declared that they had a deal with President Trump to quickly extend protections for young undocumented immigrants and to finalize a border security package that does not include the president’s proposed wall.

Which left some of his die-hard supporters fuming.

Nearing midnight and into Thursday, social media accounts came alive as elected officials and activists on the right dashed off tweets and posts to share their shock. And in between those posts, there was a flurry of fuming calls and text messages — a blaring political fire alarm among Trump’s die-hard supporters.

“The reality is sinking in that Trump administration is on the precipice of turning into an establishment presidency,” Sam Nunberg, a former Trump campaign adviser, said in an interview early Thursday morning.

While over at Steve Bannon's Breitbart they were not only accusing Trump of caving.

In a meeting with establishment politicians from the Problem Solvers Caucus and the Blue Dog Coalition, President Trump signaled a full-fledged cave on the issue of giving amnesty to nearly 800,000 illegal aliens currently protected by an Obama-created executive immigration program.

Many in his rabid base were calling Trump a traitor...

Whether Trump caves in the face of this angry reaction, remains to be seen. And he was pouring out tweets this morning to try to calm his base down.

But there is no doubt that something has changed, and that Trump may have seen the writing on that other wall.

President Donald Trump is adopting a new approach to governing after a rocky start to his term. One adviser told Axios' Mike Allen that after seven months in office, the president finally realized, "people really f---ing hate me."

And you know what happened after the Last Supper... 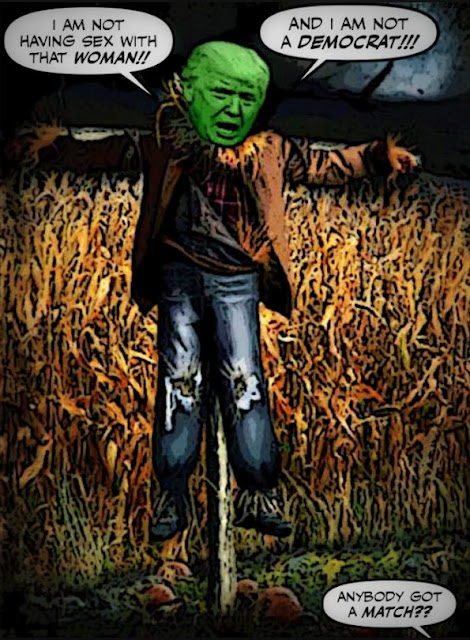 The Big Orange Green is going up in flames.

And nothing will save him now.....

Labels: Chuck Schumer, DACA, Donald Trump, Nancy Pelosi, The Madness of Trump, The Rise and Fall of the Orange Oaf

Paul Ryan was just on TV saying the the DEMS have just finally realized that border security (more ICE) is important, so he is now toting the Donnie, Nancy, Chucky dinner deal, without really saying it.

Donnie needs another win and this is a popular one. He gets to say he did something for the Dreamers that Obama couldn't. He'll get good press. He'll be happy. This also gives Donnie wiggle room away from the Breitbart/Coulter ALT-Righters and hard core racists. Also good for Donnie.

Like most I would like to see Donnie behind bars, but if he gets some good things done in the mean time, like saving the Dreamers, its a win.

As dangerous as Donnie is, it's only been his ego and incompetence than has prevented him from doing more harm. But looking back at how bad Bush was and the havoc he created for the world and by the way also from a questionable win. Donnie might not end up being the worst President the Americans have had, even if they do force him out.

To me the bigger story yesterday was the Bernie Medicare for All show. That just might start a truly progressive change in the US. And the racists can then legally deny health care rights to the illegals (at least for a while)

I have a message for anyone who believed Trump's lies and is now crushed and disappointed:

This may last for 24 hours until his narcissism wins out.

If his aids manage to keep such a thought in what passes for his mind, he is likely to be up there with the classic paranoids such as Domitian, or Stalin though we can hope his purges would not be quite so bloody.

Simon, your simple:), what you do not understand is Trump plays 4D chess while most of his opponents are playing checkers and there is not enough critical mass of 2D or 3D chess players to even bother him.

Feel free to use the image it makes me laugh

Donnie appears a bit confused these days but its not because the deep state has him on mind numbing sedatives like Bush but because he is a Con artist trying to process and convert a deluge of conflicting information to his advantage. Ideological driven Republicans don't have the same problem as they are already where they want to be and have a well laid out set of rules for filtering out conflicting information and defending their turf whereas Trump the Con man is on a journey to his envisioned destination and has to continually reconcile new information with respect to its impact on his marks and potential new ones. Its a huge task.. for example climate change was only rhetoric easily dispelled as a Chinese hoax, then suddenly the devastating storms and the need for a complex response are very real, the same goes for withdrawing from global affairs and threatening anyone that dares to confront the homeland with annihilation. Kim missed the memo but rather than follow through Trump is conflicted as it would result in a huge number of Asian deaths and tarnish the purity of the Trump dynasty to be inherited by the snow white princess and the twiddle dumb twins. The list goes on but it his behavior has nothing to do with dementia or a deep state drug conspiracy its just a determined Con trying to feel his way through the swamp to a visionary Trumpland. Will he make it? The alligators are everywhere but either toothless or unwilling to take the first bite in case he is toxic meanwhile some of Americas avowed enemies must be dancing with glee ... so much fun for so little cost!
RT

hi Willy...I should have mentioned that keeping the Dreamers is supported by most Americans including many of Trump's supporters. And of course that if the Dreamers can be saved that's a good thing. If he can keep the U.S. out of another war, that would also be a big plus, and I would acknowledge that. However, I find Trump so unstable I fear that he is capable of anything and that he could lead us all to disaster. Still the best way to get rid of him is unite and organize progressives with a better vision of the future, and in that regard Bernie's new crusade is very encouraging....

hi anon...how could you say that? Don't you know they're suffering? Couldn't you at least make it FUCK YOU (GENTLY) ? ;)

hi jrk...I only wish I could have been a fly on the wall when Trump finally realized how much most people hate him. It must have been a dramatic moment, and it's probably just as well that I wasn't a fly on the wall, for I probably would have beaten my wings so wildly they would have fallen off. Whoops ;) But I hear Trump is extremely pleased with the improved press coverage he's getting, so despite his extreme narcissism his new and improved persona may last at least until next week....

hi Steve...it's true I'm simple. I live a simple life. All I need is food, shelter, a lover, and a big shiny sailboat, and I'm perfectly happy. However I'm not THAT simple as to believe that Trump is playing 4D chess. I don't think he knows what he's doing and is making it up as he goes along. But clearly either general Kelly or somebody else has managed to restrain him a bit, and for that I am grateful....

hi RT...There are different forms of intelligence, logical intelligence, empathetic or emotional intelligence etc etc. Trump has some kind of hustler intelligence, where he can sense vulnerability and move in for the kill or the swindle. Which is fine, and may yet land him in prison. But what happens when he is confronted with a dangerous crisis? And can we survive that is the burning question. For every time he mentions the word Iran I see images of mushroom clouds and I wonder who will save us?

That's a great term, Simon: "hustler intelligence". Maybe I should be, but I'll admit I'm not familiar with it. Maybe you originated it. I wonder if the Germans have a compound noun for it, such as the one that I used to know, but now don't remember, that translated as "farmer smarts".

Just a couple of quibbles with what Willy was saying...Giving Donny wiggle room with the Breitbart/Coulter/alt righters and racists is not good for him as that is his base. He loses them, his approval ratings tank completely and he is a lame duck. The left will never embrace him, not even if he signed into law protection for dreamers. Secondly, Bush was bad but he was also just a puppet under Cheney, the real President of that administration, and a holdover from the Nixon years. Trump will go down as the worst President to have ever been elected and I'd be surprised if they build a presidential library for him.

And Steve from Not Thing Aboot Much At All comes out to embarrass himself once more.
Are you working/blogging for the Russians Steve?