Donald Trump and the Lies That Will Destroy Him 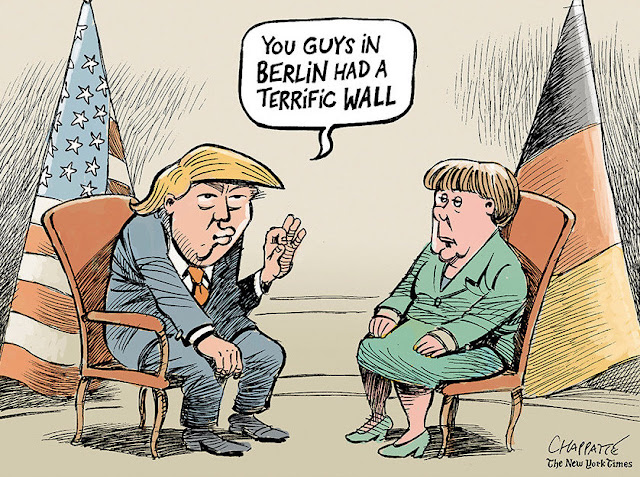 Well we know that it wasn't exactly a meeting of minds.

We know that Donald Trump acted like an orange oaf when he met with Angela Merkel.

Or like a very small man, with no manners or class.

And we know how it ended...

In the worst possible way... 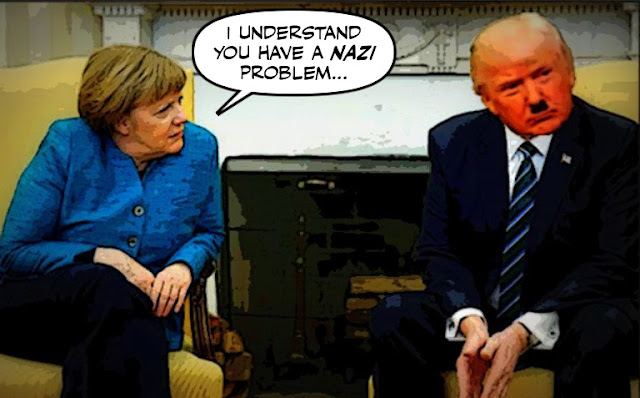 And of course we also know that Trump just can't stop lying.

For anyone who could describe that meeting as a success, must be either lying like a thief, or suffering from the first symptoms of senile dementia.

And I think this is the moment Angela Merkel realized that everything she had heard about Trump was true... 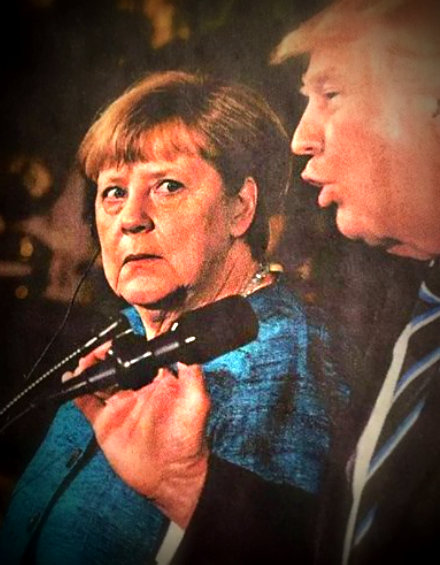 And that he really is crazy, and possibly dangerous.

But what makes Trump's pathological lying even more disgusting is the way he is preparing to betray some of the poorest people in America.

Or as Maureen Dowd writes, the way the orange oaf is eating his own tail.

It’s not unknown, of course.

In ancient Egypt, there was the symbol of the ouroboros, the snake that eats its own tail. Nerve-addled octopuses sometimes consume their own arms.

But we’ve never watched a president so hungrily devour his own presidency.

Soon, there won’t be anything left except the sound of people snickering.

Because in our information sodden society it does need to be repeated over and over again: this is NOT normal. 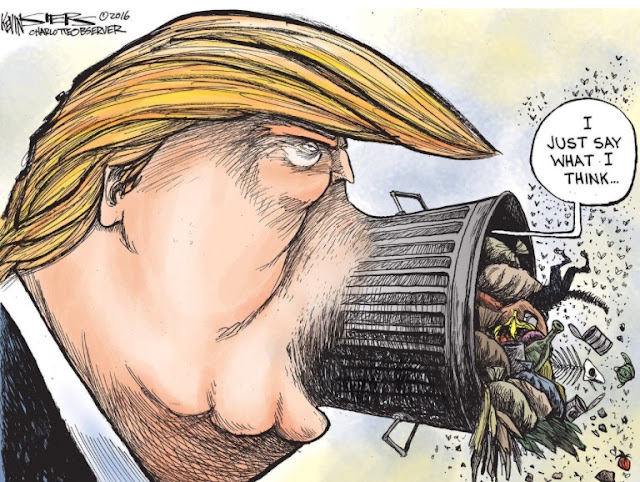 Consumed by his paranoia about the deep state, Donald Trump has disappeared into the fog of his own conspiracy theories.

He trusts his beliefs more than facts. So many secrets, so many plots, so many shards of gossip swirl in his head, there seems to be no room for reality.

In fact so bad is the situation, that CNN has come up with a list of Trump's Top Five Whoppers.

Or the Top Five Lies that along with all the others will eventually destroy him.

Today is the day FBI director James Comey is expected to finally shoot down Trump's claim that Barack Obama had Trump Tower wiretapped with a microwave oven, or whatever.

Which could be VERY embarrassing.

And are now at 37% or their lowest level ever.

The lying elephant in the White House is heading for The Abyss.

And so are the Republicans... 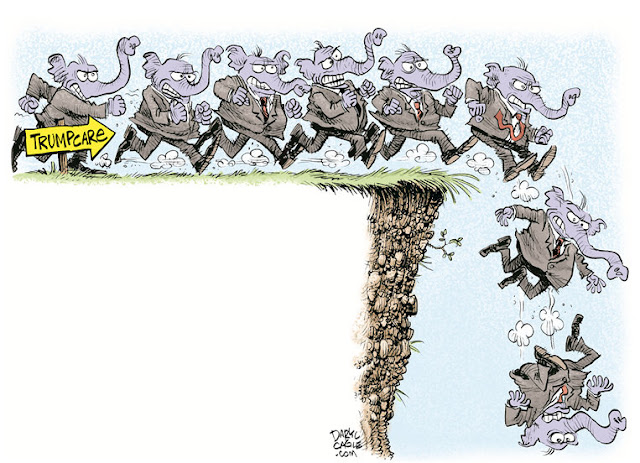 Oh so there is the fat stasi who is turning Germany into a Muslim caliphate.

The look Angela is giving Trump in your third pic says it all Simon. If I were to hazard a guess as to what she was thinking it would be: "Dummkopf, schwein, crackenzeepot!"
When will congress finally wake up and pull the plug on this ridiculous presidency? Imagine if a serious world crisis were to occur and how this joke of an administration would deal with it?
T-Rex has already threatened military action on N. Korea so our other lunatic world leader with bad hair Kim Dung Spun will be like a rabid hyena right about now, capable of anything.
And sadly, if Trump thinks a war will boost his popularity, then thousands or even millions could die, just to feed his sick, twisted ego.
JD

He does not deserve to be in the white house! An embarrassment to the U.S. and the American people. START IPEACHMENT!

I thought her expressions ranged from incredulity to that look a lion tamer gets when she realizes she's in the lion's cage without a whip and chair.

Until she met the Donald she was probably working on the reasonable assumption that a lot of what she was hearing was exaggerated. Now she realizes that it was even worse than she had heard.

Just when I thought you couldn't set the bar any lower ~MC, you do. In your brief comment you've proven to be a mysoginist, deluded and racist. You must be awfully tired from carrying that load of shit around with you everyday.
JD

the first picture of Merkel with Trump looks like a teacher dealing with a spoilt child who wouldn't like at his teacher when he was being reprimanded. I almost expected her to put her hand to his face and pull it in her direction. OMG, he must seem like dealing with Putin is easier for Merkel than Trump.

His comments that Germany owes the U.S.A. money is just beyond the pale of things. Where he ever got that from is beyond me. How about the U.S.A. not having paid its U.N. dues for years at a time. then there is the not so small matter of the U.S.A. fucking up the middle east and millions flee with the U.S.A. NOT willing to take refugees but Germany takes in a million. Perhaps Trump could pay for half the costs of the refugees or take a million. So far the U.S.A. has taken half of what Canada has taken and we have approx. 1/10 of their population.

With all the tweets this twit is sending out it will come to a point he will be ignored.

perhaps the person who made the first comment is off his meds.

Right! Impeachment, as the 25th Amendment will not suffice:

No income tax statements, no divestment of his business holdings into a blind trust just illogical tweets to his diehard supporters. The Faustian deal he made with these electors goes something like this "If you don't hold me ethically or legally accountable for my financial/political transgressions, I will reward you with the spoils obtained by eliminating illegal immigrants and any other minority/foreign groups that are victimizing our great country". There are several other caveats to the deal but this is the gist of it. So far it seems that Dinky Donnie Inc is doing well but the crowd looking for the spoils not so much. Like any good Con, the tweets are just to reassure them that their check will be mailed any day, just as soon as he can dispatch the lying, cheating, fake news spouting Democrats. The thing about a good Con game is that although the basic deal,"give me your unwavering support and trust today , in return I will make sure you are handsomely rewarded in the future", does not change it has to keep moving with new twists and turns. Installment 2 awaits.
RT

hi MC...where did you get that one from? Breitbart or Faith Goldy? For it must have come from some low place. If I lived in Germany I probably wouldn't vote for Angela Merkel because she's too conservative for me. But she is a much better leader than Trump will ever be, and unlike him she also has dignity and class...

hi JD...I'm glad you like that photo of Merkel, because I do too. Since she doesn't speak English and must depend on a translator, I think Trump's insane comment must have seemed even crazier. She probably was able to shrug off all the crazy stuff she read or saw on TV. But when he's only a few feet away, it's harder to do that, or not wonder whether he's dangerous. And yes, like you I dread what might happen if the orange clown is suddenly confronted with a real crisis. For nobody can predict what he might do, and if he's not impeached he could lead us to absolute catastrophe....

hi Elizabeth...as I just told JD, I'm with you all the way. He is an embarrassment to the American people, and a danger to us all. I don't know what it would take to get the Republicans to act, but it will get easier if Trump keeps getting more and more unpopular. And the more pressure we can put on him the sooner he will crack....

hi e.a.f...his twitter account has increased by about six million subscribers since he became president, so I don't think he is going to be ignored. I think many Americans check his feed in the morning to see whether they are at war yet. I know I do. ;) But yes he is turning out to be the absolute personification of the ugly American. And our poor neighbours deserve better....

hi jrkrideau...that's a good one too, a lion tamer who forgot her whip and chair. I watched Merkel's expressions closely thing into account that there would be a slight delay thanks to the translation. And I must say although I did at times feel sorry for her, it was pretty hilarious. I could almost hear the orange oaf's idiot comments going off like fireworks in her head. Such is the sad fate of rational people in the age of Trump....

hi David... I still think that the 25th amendment is the way to go, and for a very simple reason. It would be easier to convince Trump's rabid base that he is a sick man, than trying to convince them that he is too incompetent to govern. The impeachment process would take time, and Trump would have time to call his heavily armed supporters into the streets. Better somebody jumps him with a net and carries him away to Guantanamo as discreetly as possible... ;)

hi RT...yes, all you say is true, no income tax, no transparency, no divestment, no nothing. And still he gets away with it. Remember though that obamacare is going to give him a lot of trouble. A lot of Americans have attacked it without really knowing what they were doing. And when they discover they've been fooled they will turn on him with a passion. Even the joy of expelling all those brown people won't make up for the pain of seeing themselves or their loved ones being screwed by the big insurance companies again. There are also all kinds of other government services that are now on the chopping block, and as you know we humans don't miss things until they are gone.
I'm pretty sure most Americans will eventually end up disillusioned with Trump, and ten years from now we will be hard pressed to find anyone willing to admit they once thought he was their saviour. The only question is will we live long enough to get rid of him?

hi David...thanks for that. I don't know where the leather tangerine gets his facts from, since I don't get Fox News. But the man really is making a fool of himself all over the world...