Donald Trump and the Trumpcare Disaster 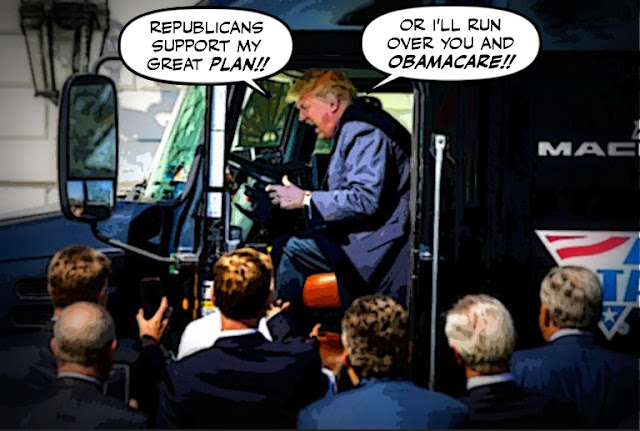 Well what a difference a day makes. On Thursday Donald Trump was sitting in the cab of a monster truck demanding that Republicans support his plan to replace Obamacare.

And when he woke up yesterday morning, he seemed pretty confident his Trumpcare plan would be approved.

But sadly for him, that's as good as it got. 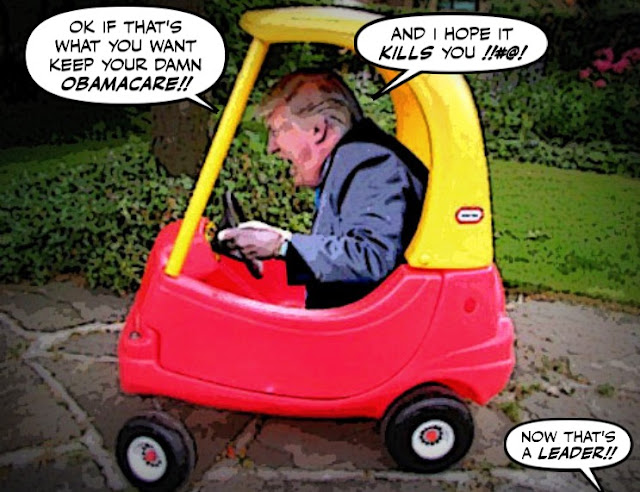 For only a few hours later he was totally humiliated, when Republican leaders pulled the bill, before it was soundly defeated.

House Republican leaders, facing a revolt among conservatives and moderates in their ranks, pulled legislation to repeal the Affordable Care Act from consideration on the House floor Friday in a major defeat for President Trump on the first legislative showdown of his presidency.

And he was calling reporters all over Washington to try to blame the Democrats.

“As you know, I’ve been saying for years that the best thing is to let Obamacare explode and then go make a deal with the Democrats and have one unified deal. And they will come to us; we won’t have to come to them,” he said. “After Obamacare explodes.”

As well as claiming that he never said he would repeal Obamacare right away.

Even though he did.


Only to end up looking like even more of a clown.

“To be honest, the biggest losers today are Nancy Pelosi and Chuck Schumer,” Trump said of the House minority leader and the Senate minority leader. “Because now they own the disaster known as Obamacare.”

By trying to portray the Democrats as the real losers.

Even as the Republican hacks at Fox News were declaring Obama, and his legacy, the real winner...

And while I'm sure Obama and Hillary Clinton are enjoying the moment.


Obama: "And then he said pass his bill or keep Obamacare!"

Hillary: "who knew health care could be so hard!"


You can be sure that Trump must be seething.

For as you know he hates to be called a loser.

But what else can you call him? 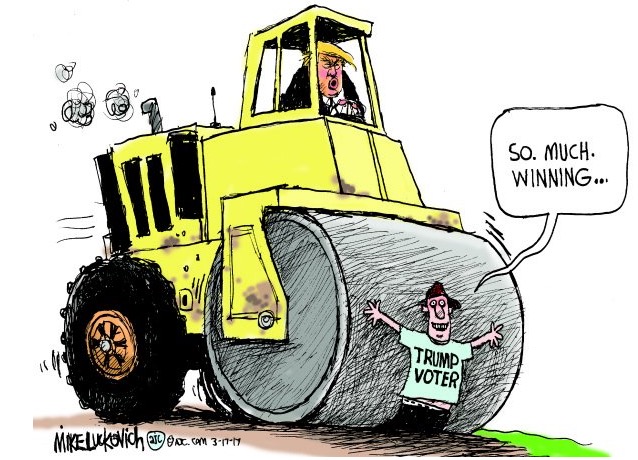 Or as Ezra Klein asks, what else can you call the Republicans?

But a party unready to govern.

It is remarkable that after spending seven years establishing repeal and replace as their top priority, Republicans are abandoning the project less than 70 days after taking power. Doing difficult things in the American political system takes patience, and it is not clear the GOP has any.

And of course I like the sound of that eh?

And for once he was right.

You can't con all the people all the time.

So you know where he is going... 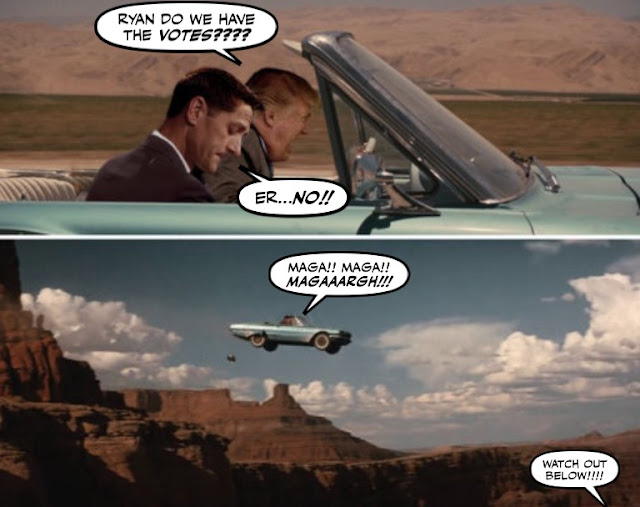 To a place called Catastrophe, or Impeachment.

While we head to a place called Victory.

Have a great weekend everybody...
Posted by Simon at 9:44 AM

Labels: Donald Trump, Obamacare, The Death of the Republican Party, The Madness of Trump, Trumpcare

How interesting that his sanest, sagest tweet(that I've ever seen) from 2012 would turn out to be the eulogy for his presidency.
Yes Donald, people are catching on to the con of the century and the writing on the wall is clearer than ever.
America and the rest of the planet can be thankful that while he was so engrossed in the adulation of his followers, he allowed his ego to put himself in this impossible situation that no amount of lying will fix.
It's time to reap your bitter harvest Mr. President. Your enemies are at the gates and they are closing in.
JD

So Pence was a great help when Trump issued his threat to the Freedom Fighters. I guess it's enough that he took some time off from chortling in the background and organizing the agenda for the next Koch donors summit.

hi anon...yes, I think that's clear. After eight years of attack politics, the Republicans don't know how to govern. And while their divisions weren't a problem when they were all attacking Obama, now they threaten to render them impotent....

hi JD....yes, it is a prophetic tweet isn't it? And I've got a great collection of other old tweets that can also be used to make Trump look like an idiot or a madman. The next few weeks are going to be interesting, because he's starting to look like Captain Bligh on the HMS Bounty, he's got a right-wing mutiny to worry about. And it couldn't happen to a nastier maniac...

hi John...I'm not sure how much influence Pence has with the Freedom Fighters, but as you point out he faithfully serves the Koch brothers, so it's not in his interest to do anything. Not if he wants to be president. What amazes me is that Trump was even willing to bargain away maternal and emergency services, and still the Freedom Klan wouldn't budge. Unbelievable and deeply disturbing...

hi David...thanks for the link. The Speer Wall? Not bad, but wait until you see my application, from the Hadrian Construction Country... ;)

On June 16, 2015 Trump said: "If you can't make a good deal with a politician, then there's something wrong with you. You're certainly not very good."

In 7 years you'd have thought the republicans would have had something ready to go, but they only understood defeating the democrats and what they stood for. they never thought about actually having to create something. In Pennsylvania, a rather poor state, has a million people on the ACA. Tossing them all off would not have worked.

So far Trump has lost on Exclusion order 1, then exclusion order 2, now health care. Can hardly wait for the budget to not work either. Some Republicans aren't too keen on the cost of building the wall either. Worst of all Trump is not delivering on the jobs he promised those in the rust belt. This could turn ugly.

Read the soon to be classic quote from John Boehner where he says in the 25 years he has served in Congress, Republicans have never ever agreed on what healthcare should be:

Trump On American Healthcare: When You Love Something, Let It Explode
https://youtube.com/watch?v=YixLWioVMCw