Now Can We Call the Cons the Bigot Party? 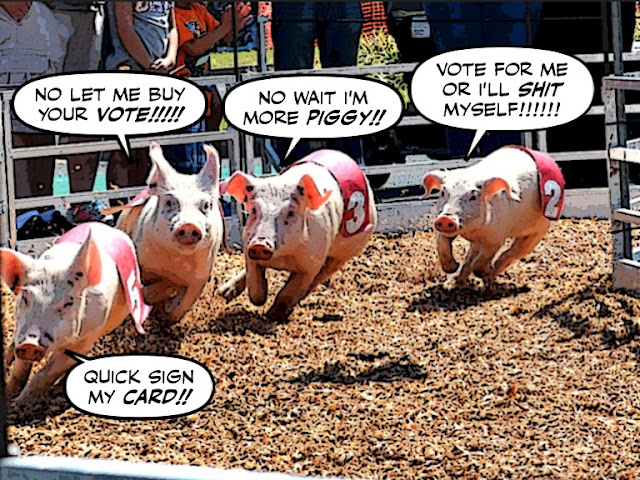 Yesterday was the deadline for the Con leadership candidates to sign up new members.

And as you can imagine, as the clock ran out on them, it was not a pretty sight.

The stench of desperation hung heavy in the air, and the squealing was deafening.

But at least they did manage to provide even more proof that the Cons should now be known as Canada's Bigot Party. 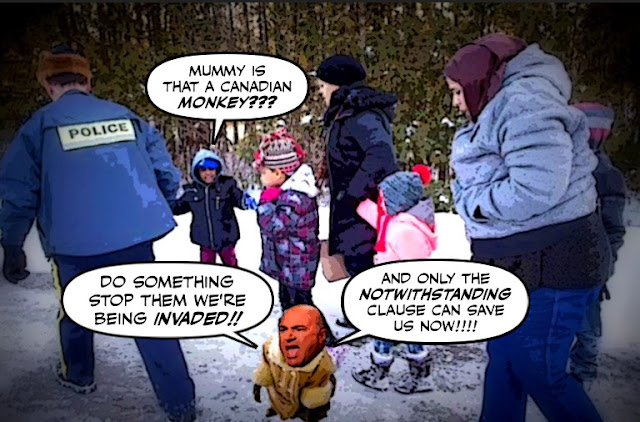 For what else can explain that Kevin O'Leary should try to make it sound like we're being invaded by refugees, who are swarming trickling across the border.

And that the only way to stop them is by invoking the "notwithstanding" clause in the constitution. Which is absolute nonsense.

And Gary Mason is right. O'Leary is an idiot. 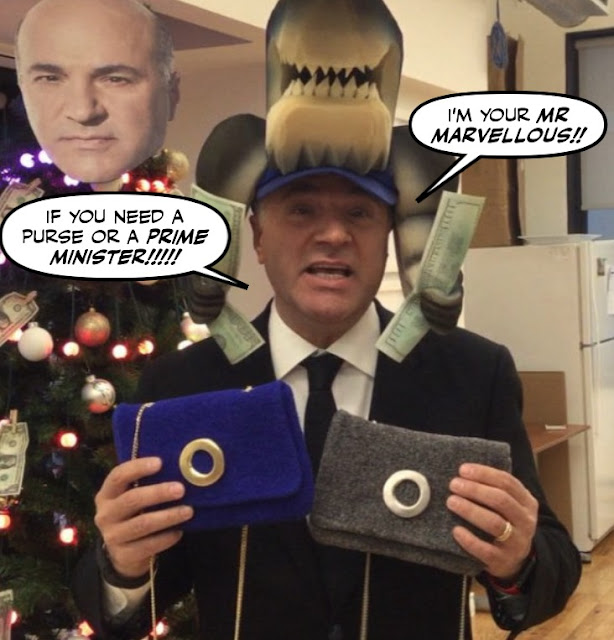 Kevin O'Leary doesn't have a clue how the country he hopes to govern one day operates. Not a clue. While his delusional fantasies about how he would rule his kingdom may fly with members of the Conservative base, they are not rooted in any kind of reality. In fact, they are so detached from it, alarms should be ringing everywhere.

But then so is Maxime Bernier, who is also doing his best to make the refugees sound like a threat, and wants the army called in to stop them. 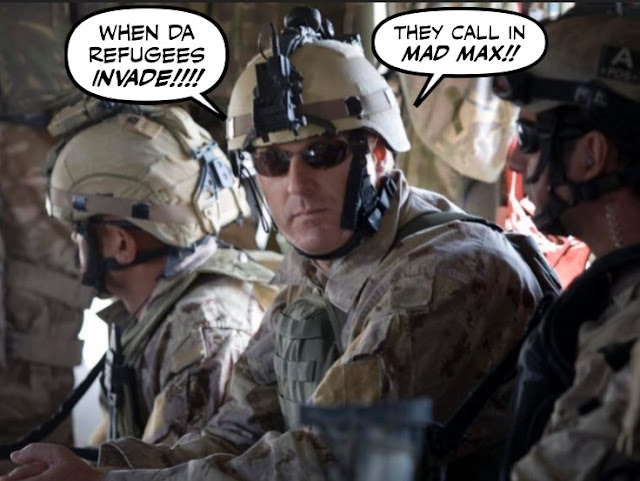 Conservative leadership candidate Maxime Bernier says he would dedicate more resources to address the flow of migrants crossing the U.S.-Canada border illegally. And if that doesn't work, he'd consider temporary measures, including deploying the military to the border.

While Kellie Leitch keeps blasting out her ghastly message...

And Steve Blaney sends out weird e-mails to his supporters... 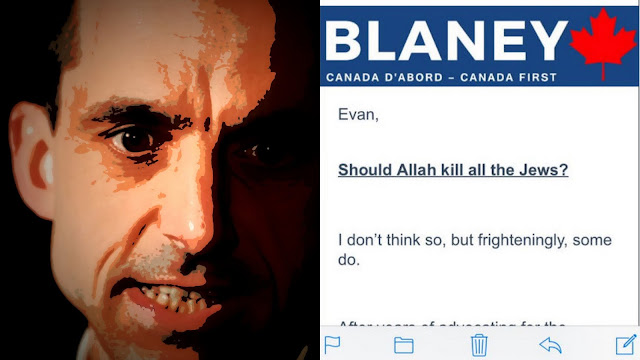 In an obvious attempt to stir up a little Islamophobia.

And if that wasn't bad enough, then there's Brad Trost, the religious fanatic, trying to stir up a little homophobia... 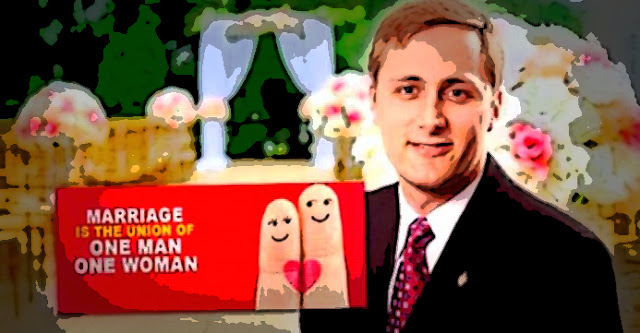 By commanding his campaign manager Mike Patton to put out this disgusting message...

Great eh? Is that a weird or weirdo campaign or what?

And really how much more evidence do we need to prove that the Cons are now the Canadian Trump Party?

Or the Bigot Party.

And the good news? All of the above will be used against them, including the vote buying scandal hanging over their heads.

And it seems that Canadians are already voting with their feet... 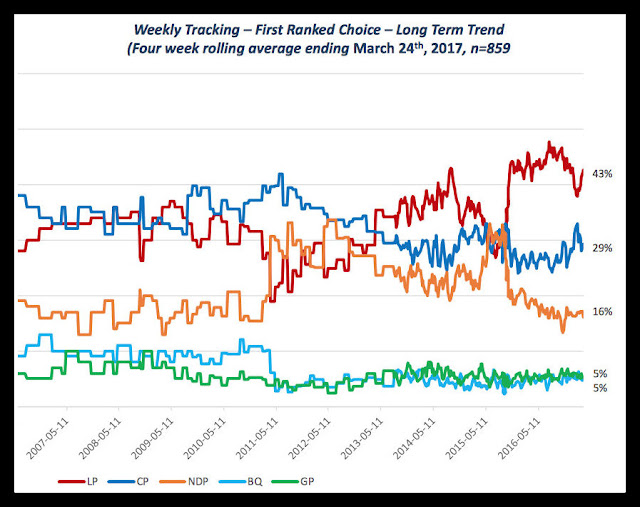 The Cons are sliding while the Liberals are climbing.

The old bigots are dying. 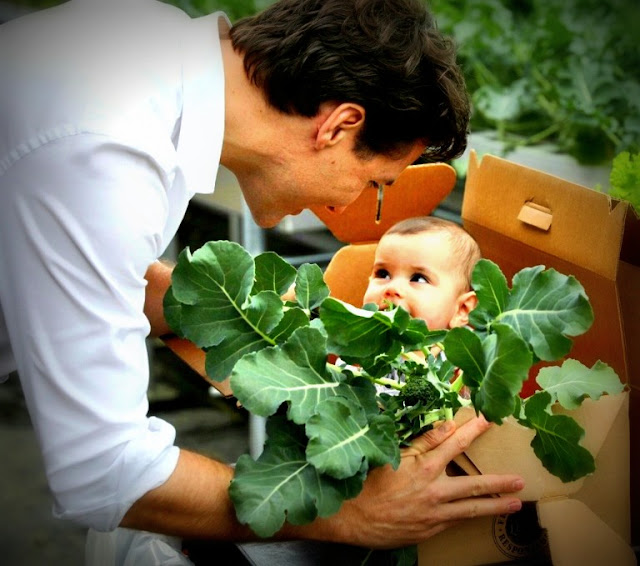 It was tightening for two reasons, year 2 is always the harshest, and the con face was Ambrose. I cannot stand her, but to a casual observer I could see how she comes off reasonable. Now that the light is shone on the bigot-fest, Trudeau is once again climbing.

America is a safe country. All the "refugees" coming here are no more than economic migrants. Defend the border. We wouldn't be having this problem if virtue signaling Slick didn't say everyone is welcome here. What a fool.

You are an obvious Liberal partisan bigot. Justin Mulroney can do no wrong in your eyes. Free trade with China is progressive! Privatizing airports is liberal! Restricting Question Period is open, transparent government of the people!

Can you imagine the kind of propaganda you'd be pumping out if Harper was doing these things instead of Junior?

Bigotry never dies. It just inspires a new generation of bigots who are even more ignorant and fanatical about it.

BTW, the latest polling from the Star shows the Cons have pulled ahead of the Liberals. O'Leary is bringing the same kind of bump that Trudeau brought during the Liberal leadership race.

All O'Leary needs for absolute power is to get the 40% of conservatives in the country to vote for him -- thanks to Prince Charming ditching electoral reform. So it looks like Mr. Motivational Speaker has dug his own grave. Hope he enjoys lying in it.

I know I'll enjoy watching this fake-liberal bribe-taking POS bite the dust in 2019. By destroying the Neo-Liberal party in 2019, Kevin O'Leary will

Don't you just hate hitting the publish button before realizing that you forgot the caps lock?

The polling was from Sun and Forum research. Nanos has Trudeau with a 14 point lead. You'll scream that nanos is FAKE BIASED LIBRULLLLL POLLSTER but any normal person can see Nanos has the best track record. Keep dreaming those sick con dreams though.

Hi Simon,
As a taxpayer I don't mind subsidizing community events like a gay pride parade unlike Andrew Scheer's shill Mike Patton ,or for Canada Day Festivities, or for Marijuana Legalization Day since such activities add colour and a certain vivacity to our somewhat dour Canadian culture.
What I do find really offensive is that, as a property tax payer, I have to compensate and therefore subsidize all the religious property, churches, synagogues, mosques, chapels etc that are not taxed merely because they have a religious basis.
This is an out and out subsidy for hate.
These organizations are usually a pretext for exerting social control, to generate funds through titheing etc. and for directing hate towards other religious or sexual minorities.
Tax the haters, don't subsidize them !
Equality for all!

Wow....Mike Patton IS out to lunch. It's ironic that he mouths fiscal responsibility when the Harper government pushed the debt to record levels. Hey Patton, it makes no sense that my tax money pays for Senators that fuck minors, buddy. Good grief!

Unfortunately each one of those little piggies has a loyal following and all it takes is the right leader and the weaponization of social media to turn them into a destructive mass of pork on election day. Their ideal leader is someone with a proven ability to unapologetically screw others to get what he/she wants as their supporters illogically assume this type of leader will do the same for them ... not to them.
The following brief article from the Independent.co.uk outlines how social media is used to complete the loop. It just takes moderately deep pockets and some technical know how. "Sources told US publisher, McClatchy that online bots had created millions of social media posts linking to articles on the sites some of which were completely false, while others contained a mixture of fact and fiction. Investigators are now trying to establish whether the websites were complicit with the people managing the bots or whether the operatives were controlling them without their knowledge".
They have a potential leader with the required credentials, the bogus websites are in place, all that is required is the bot storm to kick in at the required time. What can go wrong?
RT

Simon please do more of these articles on the CON. Our nation is at stake, we can't obsess about the fascist in America and then lose our country. O'Leery is a grave threat to our great nation.

hi MC... I'm pretty sure most of the people applying for refugee status are refugees, because if they're not their claims will be rejected. Whether America is a safe country with Trump in power is debatable. The numbers have spiked recently but are still lower than they have been in the past. Even your old buddy Jason Kenney says the border is well defended. So stop being, like so many Cons, afraid of EVERYTHING...

hi anon....yes, Ambrose got away with murder, before her jaunty ride on a millionaire's yacht was exposed, and even all the Con media couldn't put her together. They've been feverishly asking themselves for months, "when will Trudeau's damn honeymoon be over???"
But I have just one question for everyone: who better to keep the Cons at bay? If not Justin, who?
And I'm still waiting for a serious answer...

hi MCGA...Golly, that was quite a Con rant. I hope you shoved a stick in your mouth while you wrote it, so you didn't bite your tongue off. So thanks, I quite enjoyed it. Your pain is my pleasure ;)
But no, I'm not a "Liberal partisan bigot." I'm just a progressive who supports all those on the side of truth and justice. And right now Justin Trudeau is the one who can best keep you Cons down, or in your place. So naturally I support him, and cheer him on, whether the Cons, the Con media, and the purity testing wankers in our own ranks, like it or not.
I believe you're quoting a Forum poll for Postmedia. I wouldn't.
And as for your man O'Leary, stop dreaming in colour. Even if he becomes Con leader, something I doubt, he'll never defeat Justin Trudeau. The Cons are the ones destroying themselves. And of course, I'm REALLY enjoying the show. Thank you, thank you, more... MORE!!! :0

hi hinofan...I feel the same way. This country needs all the festivals it can get, because we can be rather dour, or predictable, and boring. And naturally, I also agree that religious institutions shouldn't be subsidized, especially not by those they persecute. I'd be crazy not to ;) However, I know there are some good religious people out there, who help the poor and other vulnerable groups. Or provide services for seniors as my Mum's church does. So I'm inclined to be more generous to them than they are to me...

hi Way Way Up...Yes, Patton's IS out to lunch. And I don't want to be cruel, but has LOSER written all over him and Trost's campaign. How someone could say he's "not into the gay thing" as if LGBT lives are just a "thing," is for me hard tp believe. But bigotry against all kinds of groups is on the rise, so the operative world is RESIST...

Justin Trudeau. He's the perfect politician to keep populist demagogues at bay. He's brilliant and decent but has the ability to cut through with his message.

The Con's amyglada glands are swollen and turning them into bigoted bogeymen.
I wonder if a lobotomy would help correct that?
JD

Next time one of y'all sees a Con could you please ask them how their feeling about Canada's investment in the F-35. Thanks.