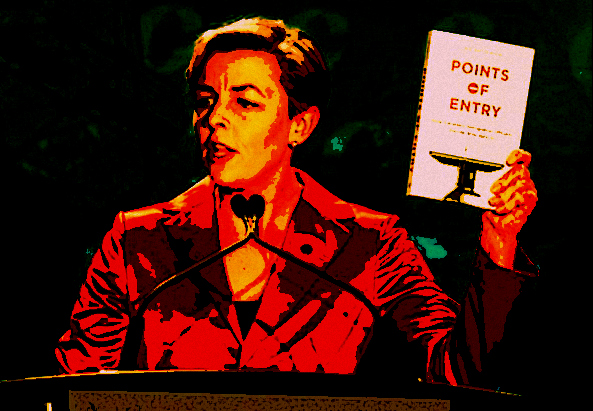 For months the ghastly Con leadership candidate Kellie Leitch has been demanding that refugees and immigrants be given her "Canadian Values" test.

While never telling us what kind of questions she would ask them.

But now Leitch has shared a few of them with supporters of the racist rag The Rebel.

And as you can imagine they couldn't be more grotesque. 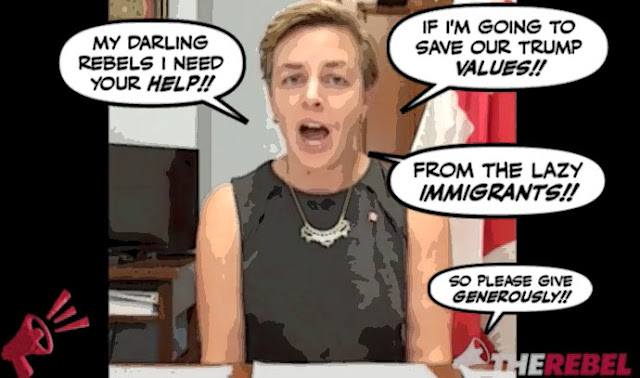 “Are men and women equal, and entitled to equal protection under the law?”

“Is it ever ok to coerce or use violence against an individual or a group who disagrees with your views?”

“Do you recognize that to have a good life in Canada you will need to work hard for yourself and your family, and that you can’t expect to have things you want given to you?”

So I'm glad to see that a university professor who Leitch claims inspired her deranged crusade is trying to educate her. 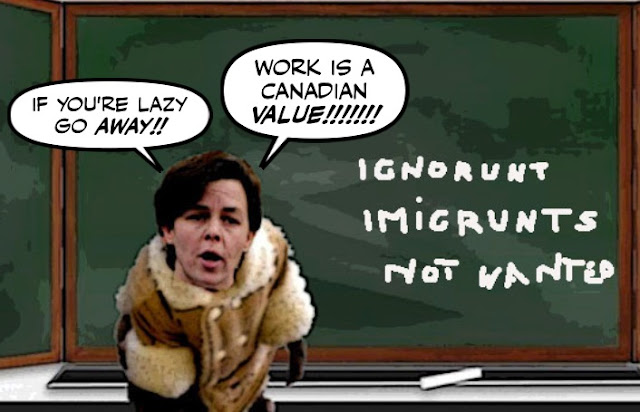 A McMaster University professor whose book is frequently cited by Conservative leadership hopeful Kellie Leitch says he's tired of his research being used to prop up her "absurd" proposal to screen immigrants for anti-Canadian values.

"It's a phony issue, as far as I'm concerned, to say that somehow immigrants don't have or don't develop the so-called values that the rest of us have," says Victor Satzewich, a sociology professor at the Hamilton university.

By pointing out that immigrants are being properly screened. They do not have to be lectured about working hard, as if they were children.

"The implication that immigrants somehow don't value hard work is completely absurd. Walk into any Tim Hortons and look who's working behind the counter. They're filled with newcomers. They're doing shift work, running to serve us our double doubles and sour cream glazed donuts.

And that Leitch is just trying to scare Canadians, and whip up anti-immigrant sentiment.

We're far more supportive of immigrants and immigration than most other countries in the world but there is still an underbelly of racism and xenophobia and fear of the other in this country," he says. "She wants to portray the immigration system as broken in order to stoke those fears."

So I'm glad to see that some Canadians aren't just criticizing her. They're warning that her ugly campaign could get somebody hurt or killed.

On the same day that Kellie Leitch released the kind of questions she wants to ask newcomers, MP Deepak Obhrai says his Conservative leadership rival is creating an American-style environment that could get immigrants killed.

While others are mocking her, hilariously...

I'm also glad to see that Rick Mercer is trying to figure out how Leitch, or anyone,  could make such a bad video...

But I think two things are already obvious.

If there was a Canadian values test, Kellie Leitch would fail it badly.

And if she had any decency she would delete her racist campaign tomorrow...

Cons have no decency, neither do the far left. Whattaboutism and Putin ball licking all day from those losers.

You're right Simon, she would fail her own test badly. Especially this question, “Is it ever ok to coerce or use violence against an individual or a group who disagrees with your views?”
Her whole campaign is based on coercing her supporters into hating Muslims and the end result of that is the more deranged of the bunch go out and harrass, assault, or murder innocent people.
Her apologists will plead "plausible deniability" but I call it the more accurate "plausible culpability".
I long for May and the merciful end of this pathetic leadership campaign. Kellie will lose and with that I hope she crawls back under the rock she came from.
JD

I find that immigrants are role models when it comes to work ethic, family values, and their respect for others. That's what makes Canada great <3

Simple minded solutions for extrapolated what if problems. If its that simple why don't we give a values test to all Canadians? A simple question such as "If you see something you want would you lie, steal, use mental or physical coercion to obtain it?" Unfortunately if the answer is yes we can no longer ban the undesirables to a colony but modern technology such as a DNA data banks, GPS ankle bracelets, and banning them from ever holding public or corporate should work.
The extrapolation part is truly amazing and can be found all over the internet. The premise is that "If the Canadian Muslim population continues to grow at an exponential rate the population will exceed 50% by 2040 and result in Sharia law". No thought that over the past 20 years growth is essentially linear with a fairly stable population around 3% and the Canadian government indirectly controls growth (not advertised) with points systems,caps as well as computer models. Something like the "New York city Great Horse Manure Crisis of 1894" that type of exponential growth just won't happen except on the internet and possibly in Leitch's mind. A total non event distracting Canadians from real problems.
RT

hi anon... you may be right, but I'm biased when it comes to the far left, since some of them are my friends. *sigh*
And they definitely are more fun to party with than the ghastly Cons, who only know one dance "the goose-step" and are becoming more racist every day...

hi JD....I too can't wait for the Con leadership race to be over, and see Leitch humiliated as she so richly deserves. I used to hope that she would win, and finish off the Cons for a generation. But her bigotry has become so toxic, I now think it would be better for all who live in this country if she simply disappeared and was never heard from again...

Hi TS....there isn't a day that I don't meet a decent immigrant, working his or her behind off to help build this country. And since I am one myself, I have absolutely no time for those who would put them down. I thought the Cons had learned their lesson, but obviously they haven't...

Leitch is a bad joke. She seems to forget HArper and her attitude were rejected. time for her to move on and find something else to do or is she so delusional she thinks she can win. well with that commercial of hers she might be on something or they forgot to give her something.