Donald Trump and the Republican Revolt 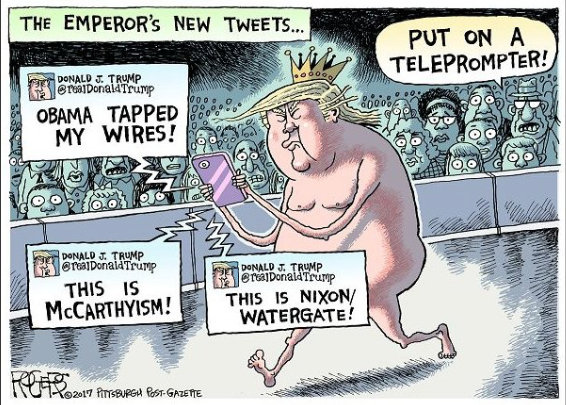 Ever since he accused Barack Obama of tapping his phone, Donald Trump has been trying to behave himself.

He has toned down his compulsive tweeting. He hasn't made any other outrageous statements.

He's trying to reassure Americans, and the rest of the world, that he's not having a nervous breakdown. And that he can be trusted with the nuclear button.

But sadly for him, this tweet can only have made even more people wonder about his mental state.

For not only are Republicans not coming together, they're bitterly divided over the plan to repeal and replace Obamacare. 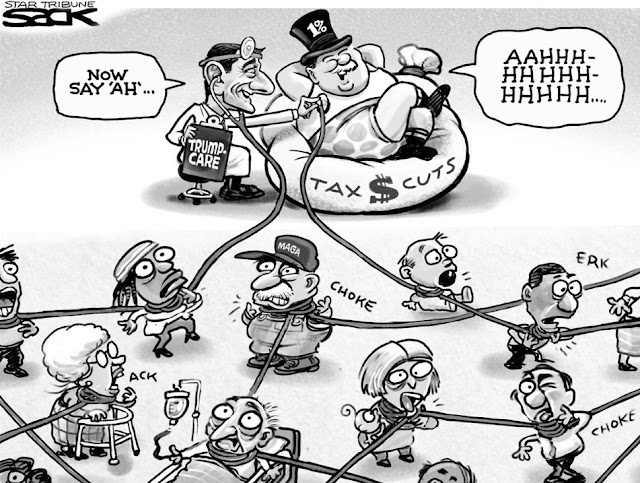 Trump now has a new conspiracy theory to try to explain why Trumpcare is threatening to blow up on the launch pad.

President Donald Trump on Saturday doubled down on his claim that Obamacare is "imploding," tweeting after days of notable restraint on social media.

On Friday, Trump said during a meeting on health care with Vice President Mike Pence and House committee chairmen that 2017 "would be a disaster for Obamacare. That’s the year it was meant to explode because Obama won’t be here. That was when it was supposed to be even worse.”

It's all Obama, or Obummer's fault. He KNEW Trump was going to win, and he left him a ticking time bomb!!!

But unfortunately for the paranoid orange oaf, many of his own supporters are starting to understand that they've been scammed... 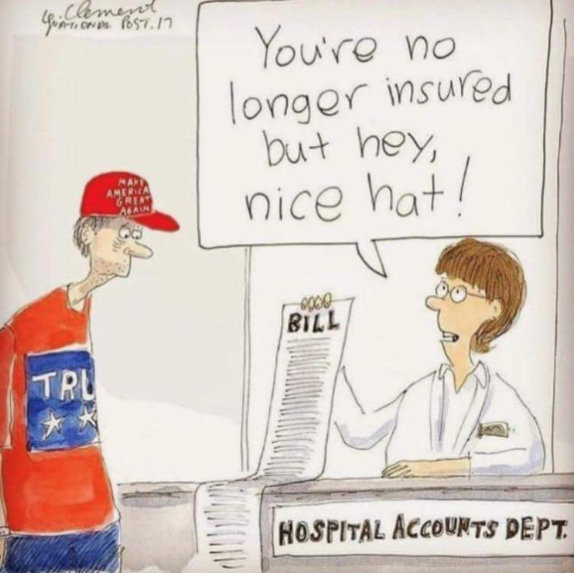 And they're so unhappy even Breitbart is attacking him.

If passed in its current form, the GOP’s Obamacare 2.0 bill will impose brutal costs Americans still struggling to make it through a great recession—particularly President Donald Trump’s base—and risk handing Congress and the presidency back to Democrats.

The Left is furious and energetic under Trump. The 2018 midterm elections are right around the corner … The white, working class gave Trump a chance in 2016. They could easily begin voting Democratic again or drop out of the political process altogether after a healthcare betrayal.

So are its readers:

You can hear the hope hissing out of them... 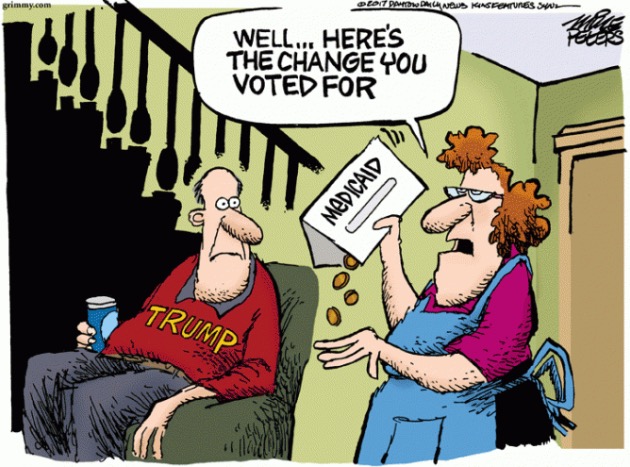 Even as their blood pressure rises to new and dangerous levels.

Breitbart may not only kill Trumpcare. It's that big in Trump's world.

There is nothing the Republicans can replace Obamacare with that won't tear the party apart.

And as for Trump's plan to blame the Democrats if Trumpcare goes down in flames.

In an Oval Office meeting featuring leaders of conservative groups that already lining up against House Republicans' plan to repeal and replace Obamacare, President Donald Trump revealed his plan in the event the GOP effort doesn't succeed: Allow Obamacare to fail and let Democrats take the blame, sources at the gathering told CNN.

Good luck with that one... 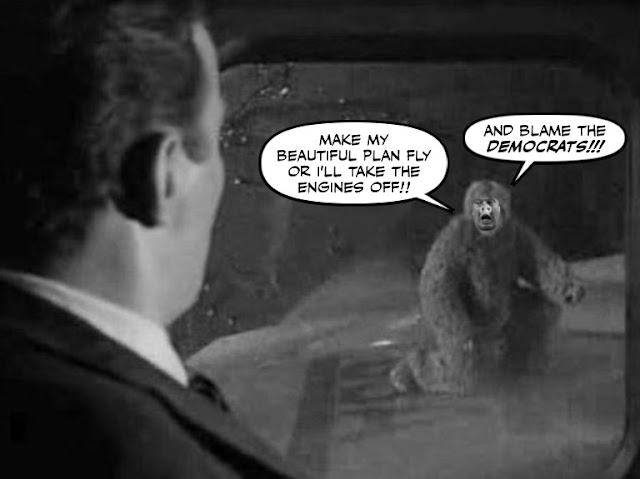 He made many extravagant promises he should've known he couldn't keep.

He has revealed himself to be a fraud and a Con artist.

And if his criminal incompetence brings down the whole system.

It's never wise to underestimate the stupidity of the American voter. Trump's plan to defund the ACA causing it to go into a death spiral is nothing new. In 2015, Marco Rubio inserted a poison pill into an omnibus spending bill to prevent the government from subsidizing unprofitable insurers in the individual market exchanges. This led to insurers pulling out of the exchanges. Lack of competition then led to rate increases, which allowed the GOP to howl that Obamacare was failing.

As we saw last fall, this worked. Voters liked the ACA, but hated Obamacare, even though ACA = Obamacare. Voters in the exchanges hated the rate increases, but blamed Obama, not Rubio. The same dynamic is still in play. Fox News viewers and Hate Radio listeners will continue to blame Obama, not Trump.

Gotta burn down the village to save it, I love the smell of cognative dissonace in the morning.

Honestly, Simon, what did Trump's Gullibillies expect? ISIS was supposed to be wiped out in just 30 days under Trump's oh so secret plan. By now crews should have been working non-stop on the first hundred miles or so of his 30' high wall along the Mexican border. The wall contractors would be facing a tough fight for workers thanks to all the offshored jobs Trump would have repatriated. Hillary would be lining up with her tray for meals in some prison cafeteria. The Boys from Beijing would be pushed back out of the South China Sea, and, yes, the Gullibillies would all be cozy with their new, expanded and improved healthcare system that Trump promised. They believed this from a guy who ran a casino into bankruptcy. As a rule I try to avoid schadenfreude but these slack jawed, knuckle dragging morons have no one to blame but themselves for inviting this serial deviant into the White House. Screw 'em.

These people will continue to blame Democrats as Republicans rob them blind. They've taken the cheap racial bribe LBJ spoke about.

Once suckered into an abusive relationship the abused always blames themselves or externalizes the blame. Its never the abuser, at least until its very late in the cycle. In this case it is unlikely there will be much self blame so Obama, Clinton, the elites, the deep state,fake news and immigrants make good targets. As with any accomplished abuser its not just the abused but the surrounding support structure (society) is also held hostage. Seldom ends well.
RT

Trump will try to blame the Democrats. However, they don't control anything in the U.S.A. at a federal level anymore. About all I can see Trump doing now is telling his rabid base that those 3 million who voted illegally for Hillary, are using Obama care and they're having to pay for that. Hey it might work, these Americans seem to buy anything.

What could happen is they simply repeal the ACA and nothing passes to replace it. Then the republicans sit back and wait until people forget what happened. its why some governments do all their nasty stuff in the first year and people forget by the end of year 4. if there were no ACA and no replacement some states might implement their own health care plan.

it is beyond me how a country which is supposed to be a "civilized" country would intentionally set out to kill children because their parents can't afford health care. Because children with out health care will die. Defunding Planned Parenthood will only result in more deaths from cancer. Like how is that going to help the country? Oh, well I can only conclude if Republicans think people who aren't millionaires don't deserve to live if they're ill.

hi anon...thanks for passing on that info, it only makes it even more of a horror story. I can't help feeling that the so-called Obamacare plan wasn't sold very well to Americans. And when those rate rises came so close to the election, I don't think the Democrats reacted strongly enough and blamed those responsible. I suppose the good news is that many of Trump's supporters will hopefully learn from this debacle, and we should have fun pillorying Trumpcare as hard as we can...

hi Steve...I see you've moved, or mutated, from Trump Thought to Bannon Thought. And as usual I urge you to reconsider. All you're going to get from the ashes of a burnt village is fascism...

hi Mound...I find myself swinging from feeling sorry for some of Trump's supporters one day, to wanting to ride through the places where they live like General Sherman himself. I am absolutely horrified by the suffering Ryan and his icy ideologues are prepared to inflict on their own citizens with their Trumpcare farce. I wouldn't wish that suffering and despair on my worst enemies. But as you say, what did they expect by supporting a man like Trump? And what else can shake them back to reality?

hi anon...when I read the comments from Trump supporters I'm amazed at how so many of them still believe in him. I feel sorry for the desperate, but only anger for the cult he has created....

hi RT....yes I see the "Deep State" as managed by Obama and Hillary, is now the big villain. Where the hell was it when we needed it BEFORE the election? ;)
You know I've been reading a lot of interesting articles about the internet recently, and although I'm obviously a fan, what I once thought would bring us together, is now creating separate worlds where people only believe what they want to. e need to address this problem starting in our schools or we are going to be in real trouble...

hi e.a.f.... What I find interesting is that many Trump supporters don't have anything against Obamacare, but they are fixated on the notion that undocumented immigrants and refugees shouldn't get any help. So maybe Trump failed to understand that, and shouldn't have promised to destroy it, as he did especially near the end of the campaign after those rate hikes were announced. Because he's now given the Democrats a huge target, and he stands to lose the support of many of those who believed that he could satisfy the Koch brothers and the poor at the same time...

hi David...I'm glad to see that Bernie is weighing in, and I hope he can speak out even more loudly. The Democrats need leaders badly, and Sanders and others like Elizabeth Warren need to get out there and start building a movement again, so they don't make the same mistakes all over again....

This evening a Democratic senator from Kentucky was being interviewed on CNN. the state voted for trump, by the cart load. It would appear americans are dumber than some of us thought. He said they don't like Obamacare but they like the ACA. They don't know its the same thing. He said however, when it disappears they will know.

totally agree there Simon. Its fine for the Democrats to work in Congress but if Saunders were to do his road shows proposing another health care plan people could/would buy into, it would give people something to think about as an alternative. Elizabeth Warren is a committed person, but she doesn't have the appeal Bernie Saunders does. Saunders needs his own road show to counter the ones Trump is holding. Not every one watches the new and not all news is actually providing decent information.