The Quebec Bashing Media and the Tempest in a Snowstorm 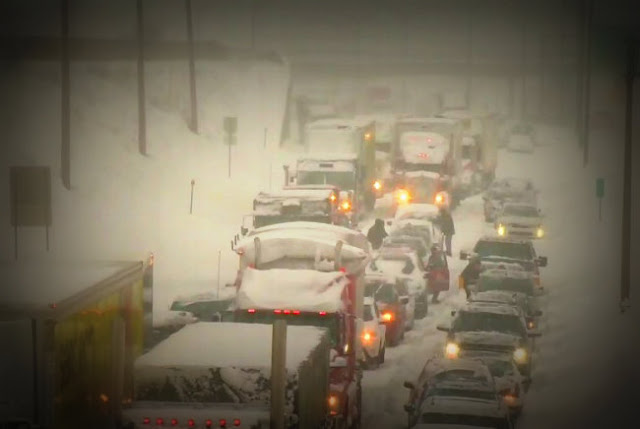 It's a classic Canadian story, with some of the good and some of the bad that makes us who we are. And a lot of snow which does the same thing.

And it could have been an uplifting tale about battling and conquering the elements in the Great White North.

But instead it turned into a horror show, where more than a week later they're still trying to figure out how this could happen.

And to make matters worse, some in the Con media are using what happened as an excuse to bash Quebec and Quebecers again. 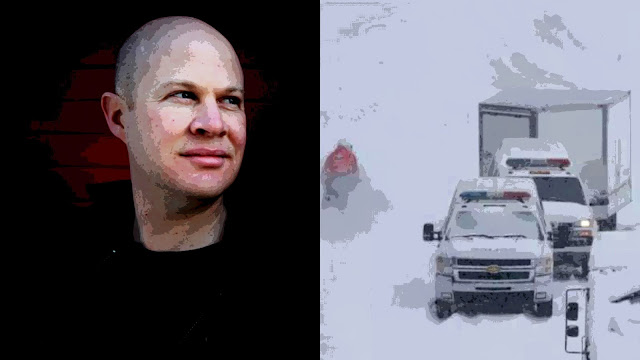 And all because Andrew Potter, a former Postmedia editor, resigned as the head of  McGill University's Institute for the Study of Canada.

After writing an article for McLeans, claiming outrageously that the snowstorm debacle had exposed Quebec's social malaise.

The fiasco is being portrayed as a political scandal, marked by administrative laziness, weak leadership, and a failure of communication. And while the episode certainly contains plenty of that, what is far more worrisome is the way it reveals the essential malaise eating away at the foundations of Quebec society.

Compared to the rest of the country, Quebec is an almost pathologically alienated and low-trust society, deficient in many of the most basic forms of social capital that other Canadians take for granted.

At some point, charm and uniqueness betrays itself as serious dysfunction—and the famous joie de vivre starts to look like nihilism.

Which of course is absolute nonsense, and made Potter sound like some 19th Century British colonialist spouting forth about some pygmy tribe or other... 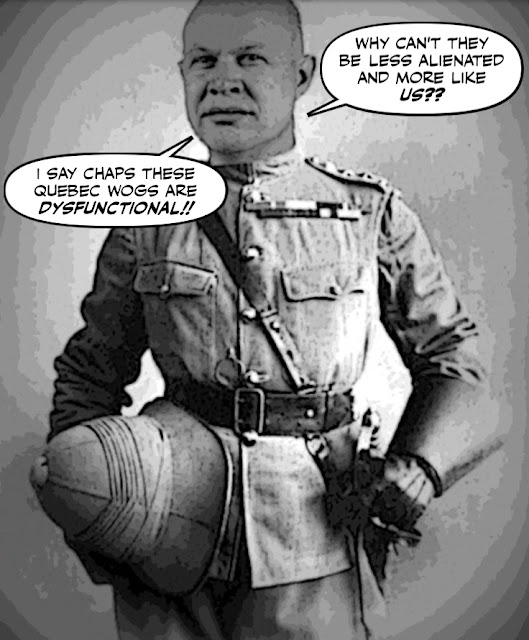 But at least Bwana Potter recognized he had gone overboard, and resigned.

And I actually feel sorry for him, because I believe he wrote what he did out of ignorance rather than malice. Which isn't surprising since he had only lived in the province for seven months, before delivering his sweeping judgement.

And I agree with La Presse’s Patrick Lagacé that it was probably just an unfortunate "brain fart."

But I have no time for some of his Postmedia friends like Andrew Coyne, who was quick to mount his soap box, and proceed to blow hot air out of every  orifice...

And in his self appointed role as Guardian of the Values of Con Canada, even went after Justin Trudeau's adviser Gerald Butts like some kind of nutty inquisitor...

Where do you think people would have got the idea that the PMO had contacted McGill? https://t.co/g6HGI3iGM5
— Andrew Coyne (@acoyne) March 23, 2017


Trying to hound him into admitting that the PMO might have pressured McGill into issuing this statement:

No doubt because when you work for Postmedia, that gets you EXTRA brownie points... 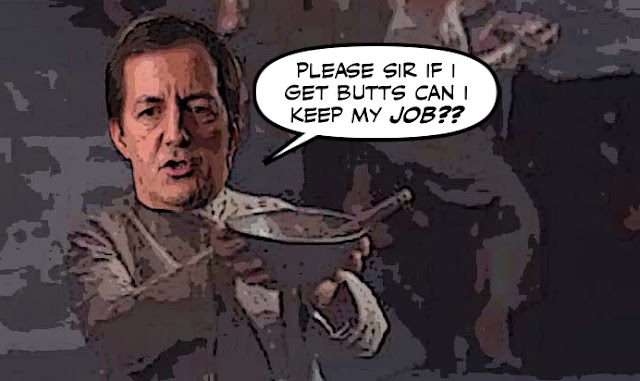 Or at least increases your chances of not being fired.

And then there was the ghastly Margaret "Marie Antoinette" Wente, the serial plagiarist and over the hill click bait specialist.

Who suggested that by violating Potter's "academic freedom" Quebecers had gone tribal. 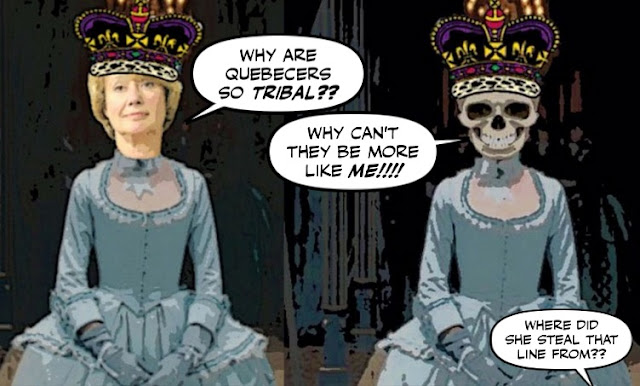 In a disgraceful show of spinelessness, McGill University, one of the most respected institutions in the country, effectively forced out a man who upset Quebec’s political class because he wrote an opinion piece about the snowstorm that they didn’t like. It would be absurd, if it weren’t so awful.

Which like almost everything Wente writes or steals, was both offensive and complete bullshit.

For as a Montrealer, and a McGill graduate, and somebody who knows Quebec better than any of those Con hacks, and lives with a member of the French "tribe," this is how I see this story:

Potter wasn't fired, or forced out by the political class, or the illuminati, or whatever. And the story has nothing to do with academic freedom.

He resigned because he realized his article was a shoddy caricature, riddled with factual errors, and an absolute joke. A cringingly embarrassing chapter in the Tale of the Two Solitudes. 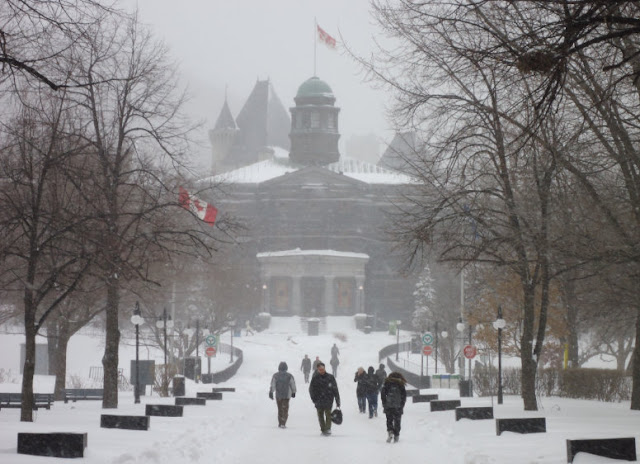 For if he did get away with it, the institute would be seen as a farce, and McGill's time honoured but not uncontested place in Quebec, could be seriously damaged.

So Potter should consider himself lucky that he still has a teaching job at that university. And will hopefully take advantage of the opportunity to learn a little more about the history and the culture of the French nation in Canada he now lives in.

As for his shabby buddies in the Con media, I can only hope that they can cool their jets, before they stir up more anti-Quebec feeling, as they have so many times before.

Because while Quebecers are of course not perfect, they don't need any lessons from English Canada. None whatsoever.

And in a country that's starting to reek of bigotry and xenophobia, we need more hatred like we need a hole in the head. 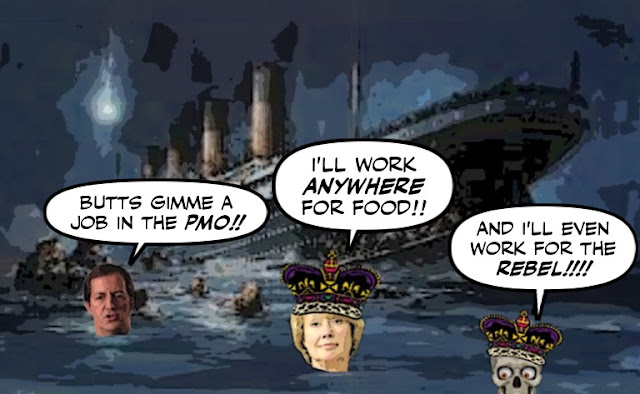 But I must admit I would like to see all those old Con hacks replaced by a new generation that better understands this country. And has more respect for the people who live in it.

You know, in his classic song Mon Pays, Quebec's unofficial national anthem, the singer and composer Gilles Vigneault wrote this:

And all I can say is thank goodness it's Spring.

So everyone can get a grip on themselves.

And remember that those who don't understand their own country.

Are sooner or later condemned to destroy it....

he had only lived in the province for seven months ?
Heck, he was probably still having a problem finding his way to the office.

I must say, I only lived in Québec for ten years but I don't recognize anything he is bloviating about as the province I knew--I have not had a chance to get back to visit for the last three years.

In fact it was easy to say, "Je suis fier d'être Québecois. Somehow, much as I like Ontario it's hard to have the same emotion here and I was born in Ontario.

Clearly that mess was a partly a failure of com munitions and the emergency services should have had firmer direction but the same day/night we had a fairly nasty accident on Hwy 401 in Ontario and for some reason I don't understand some motorists were still stranded in a service centre 24hr after the initial crash.

Clearly this shows that Ontario is collapsing in chaos.

Hey Mr I'm from Scotland, live in Toronto, but I'm a Montrealer. You don't understand the bureaucracy and all the waste here. Transport Quebec and the SQ were totally incompetent. Hundreds of cars stranded on a major highay for hours on end. Bet you're a bill 101 supporter too. Why do you think so many people and companies left this welfare state of a province?

hi jrkrideau...I like living in Ontario, just as I enjoyed my short stint in BC, but Quebec will always be special for me, and I hate people who attack it and the people who live there in such an ignorant way. It's fine to criticize the province for this reason or that reason. But to use a snowstorm as an excuse for such gross stereotyping is simply appalling, especially coming from someone who should know better. And as for Coyne and his friend Potter, maybe they should draw up a psychological profile of Alberta, because I'm sure that would be at least three times scarier... ;)

hi MC....please, I know all about Quebec, and because I do get around I am able to compare different places, and see their strengths and their weaknesses. I never said that Transport Quebec and the SQ hadn't acted in an incompetent manner, I just object to somebody using that as a metaphor for what's wrong with an entire province. Which is actually a pretty neat place, and helps make Canada a more interesting country. And yes since you ask, I do support Bill 101, I had no problem learning French, I also speak Spanish, some Portuguese, and of course Scottish. And the more languages the merrier. You should get out more, and stop being so negative about everything...

it was unfortunate that 300 were stranded in the snow but really it wasn't as if a bomb had been dropped, health care revoked. get over it all. This is Canada, we have snow some times people make mistakes. In winter even in B.C. its always a good idea to travel with a blanket, a few bottles of water, and candy bars, a flash light and a good book.