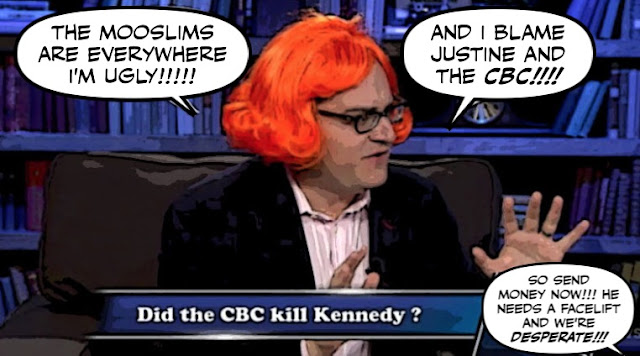 For years Ezra Levant has disgraced himself, and disgusted decent people all over Canada, with his ugly professional bigotry, and his total lack of class.

Or the way he begs for money all the time, like a screaming beggar.

But now Levant and his hate mongering rag The Rebel have finally hit rock bottom. 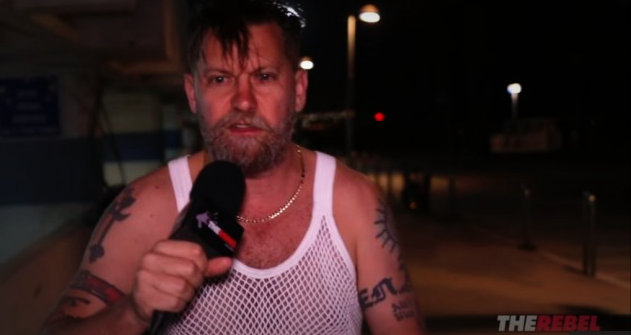 After the grubby Rebel correspondent Gavin MacInnis went on an anti-Semitic rant shortly after a visit to Israel's Holocaust Museum.

And embarrassed Canada all over the world.

By first seeming to suggest that Holocaust deniers had a point, and then stumbling through the streets of Tel Aviv, delivering another deranged rant...


And needless to say, creating all kinds of ugly headlines. 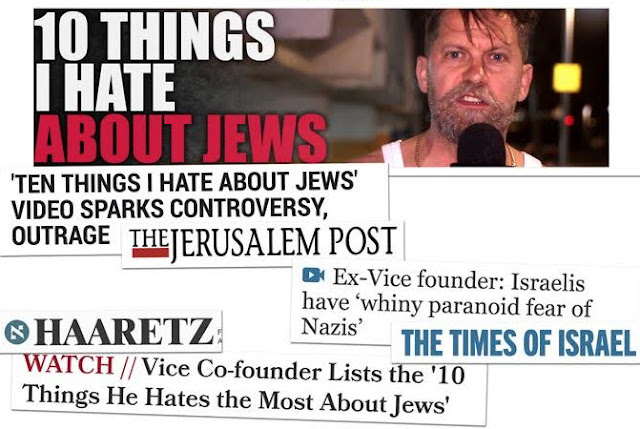 The Times of Israel took exception with "the video of an apparently drunk McInnes, wearing an undershirt" as he "stumbles down a Tel Aviv street ranting about Israel," particularly the part where the "star of Canada's Rebel Media" claims Israelis have a "whiny paranoid fear of Nazis":

"Canadian YouTube personality Gavin McInnes said that his visit [to Israel] was making him anti-Semitic, that Israelis have a 'whiny paranoid fear of Nazis', and that Jews were ultimately responsible for World War II."

And disgracing his country.

But what makes all of this even more disgusting, is the way Levant tries to claim that McInnes is actually anti-Nazi, and blames the whole controversy on "liberal Jews."

In what must be the one of the longest and most pathetic videos he has ever made...

Even though McInnes and the two alt-right Rebel skanks Faith Goldy, and Lauren Southern make their feelings clear here.

And Goldy even calls Levant the "Jewnicorn."

But then that bigot beggar must be worried. He's already lost about 3,000 subscriptions, and as we spread that McInnes video all over the internet more are bound to follow.

I understand a commercial boycott is also being planned, similar to the one that is doing Breitbart great damage.

And another person who should be worried is Kellie Leitch. Who despite claiming that Gavin McInnes would fail her Canadian Values Test.

Was caught by yours truly last night, still running her filthy ads on the Rebel...

But then you know what I think of Leitch. She should delete her campaign immediately.

And you know what I think of Levant.

The sooner we can send him to the place he belongs.

The cleaner and more decent our Canada will be... 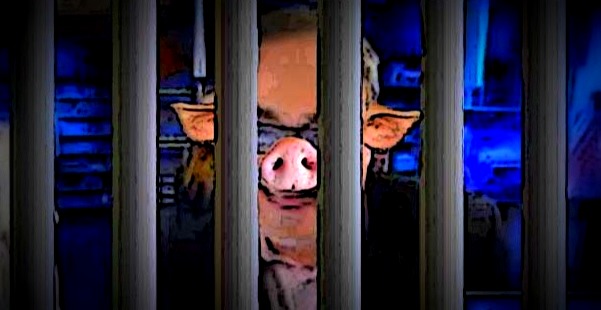 Deus vult? Deus vult? Is she totally unaware of what that signifies? Or just so rabid that she does not care?

That line is worse that G.W Bush's incredibly stupid use of the work "Crusade" just after 9/11.

Ezra and the crew have outdone themselves this time.

What crime has Levant actually committed that he deserves to be jailed.

Being a tool is not a crime.

As for Lauren Southern she was smart to get away from rebel media and it's bad influence while she did.

She now has a press access to the white house.

Well, Gyor since you asked: Levant should be investigated for promoting hate speech. The CRA should also look into his finances, which I am sure they never did during the Harper regime.

as much as I detest what they are saying, they do have the right to say it. its freedom of speech.

it is best to ignore people like this. any attention, even negative, stokes them.

It's unfortunate the Mossad didn't get their hands on Ezra's drunken spawn while he was in the country. Then again, borders have rarely been a problem for them to make things right and they never forget when they've been insulted, especially on their own turf.
JD

It depends on the provisions of the hate crime legislatio--he may not have committed any but he has lost enough libel or slander cases that he may well accidentally trip over some line.

Gavin was just joking he's always pushing boundaries. And if you watch Levant's follow up video, he makes some very good points. Time to renew my subscription to The Rebel, it expired months ago.

Gotta love these zany guys. And an American-Indian wife to boot. Let's get busy having babies!

I can't take it anymore. It's getting so I can't tell the twitter Nazis from the liberal Jewish journalist activists. How about that straight-man look on the face of the fat guy in the video - I haven't laughed so hard since Ed Sullivan tried to call time on Jackie Mason. Years of practice to perfect that level of comic timing. And I paid eight bucks to see Superman. Somebody give them whatever they want so they'll stop before I bust another gut.

hi jrkrideau...yes, can you believe that? The two Harpies in their white supremacist hoodies. And did you know that Lauren Southern turned up last week in the press room of the White House? Bad behaviour it seems is rewarded, and the bigot Levant's gang really have outdone themselves...

hi anon...McInnes' views on masculinity are about as reactionary as they come. One of the things that grubby Con is obsessed with, is the need for women to stay at home and have as many children as possible. And I think that picture of him stumbling drunkenly through the streets of Tel Aviv just about says it all. What a freak, what a loser...

hi Gyor...I don't know if you are aware that in Britain Levant would have been fined or jailed long ago. Their hate laws are much stronger than ours, and I for one think that's a good thing. It is possible to have free speech, and punish those who would stir p hatred against vulnerable minorities. For if you don't punish them, sooner or later it will lead to tragedy. As for Lauren Southern, she really does belong in Trump's America more than she belongs in Canada, for she is just a hideous harpie and as dumb as a spoon...

hi e.a.f... if I could ignore Ezra Levant I would. But since some in the MSM insist on trying to normalize his bigotry, and Levant and his ilk are trying to poison this country, I feel I must do what I can to denounce him....

hi JD...unfortunately Levant has almost always been able to get away with his anti-Muslim bigotry. But he was recently hit with a big court fine, and now that he's also guilty of using his filthy rag to promote anti-semitism, I'm hoping for even bigger things. And I must say the desperate look on his face in that video had me practically howling with laughter. I can only imagine what the atmosphere must be like in the Rebel's grubby little office, and now that I've seen what they look and sound like when they drink, my contempt for those grotesque bigots couldn't be greater....

hi MC...Gavin McInnes is a low life drunkard. Period. His career was already going down the toilet, and his white supremacist musings will only accelerate that process. But go ahead and spend your money at the Rebel. Levant, who according to Frank Magazine drives around in a Hummer, depends on suckers like you to subsidize his lavish lifestyle. And believe me he's laughing all the way to the bank....