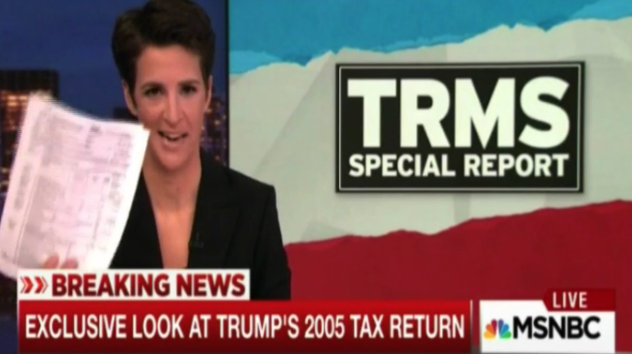 I must admit that when I saw Rachel Maddow's breathless promo, for a brief moment I had a vision of Donald Trump in handcuffs.

But sadly, although the leaked tax forms did show that Trump is not a very good businessman.

President Trump wrote off more than $100 million in business losses to reduce his federal taxes in 2005, according to forms made public on Tuesday night:

By claiming losses, Mr. Trump apparently saved millions of dollars in taxes that he would otherwise have owed.

There was so little in those few pages, that one had to wonder whether Trump had leaked them himself. 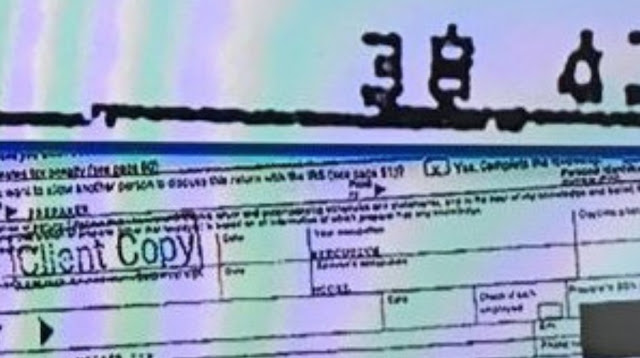 Especially after seeing the stamp on the left of that picture.

But then who could blame him for trying to distract Americans?

When his monstrous Trumpcare plan is under assault from both Democrats and Republicans. 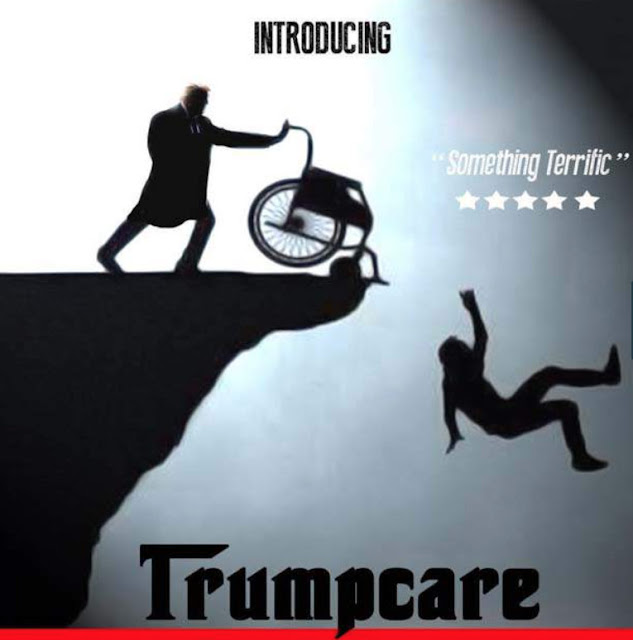 He's accused of threatening the lives of more than 20 million poor and vulnerable Americans.

And today is the day the FBI Director James Comey is expected to reveal whether Trump is being investigated.

Sen. Sheldon Whitehouse said Tuesday that FBI Director James Comey promised to tell him Wednesday whether the FBI is investigating ties between Russia and the campaign of President Donald Trump.

Or as his faithful stooge Kellyanne Conway has suggested, being targeted by a rogue microwave oven. 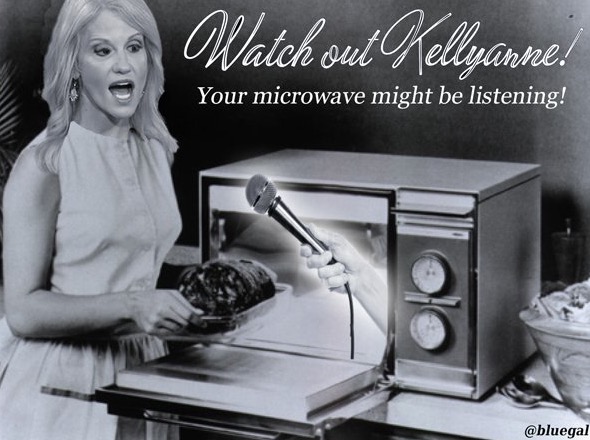 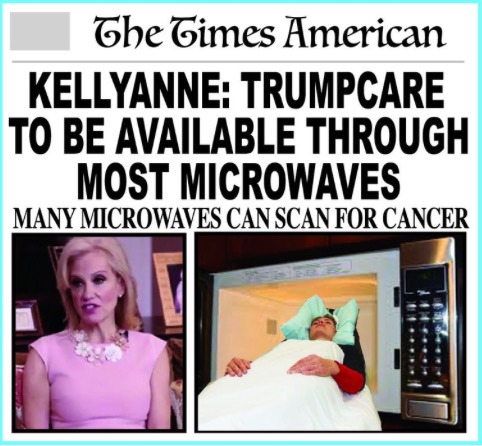 You know, it's depressing to think how much human suffering Donald Trump is prepared to inflict on his own people.

But the good news is that his job approval number are tanking.

Him and his foul regime are heading for the same place as their criminal Trumpcare plan... 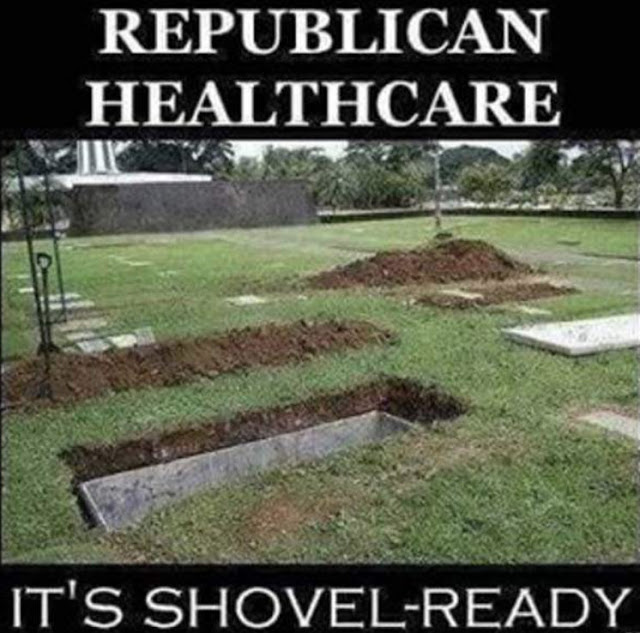 He too is shovel ready.

And not even Sean Spicer or Kellyanne Conway can save him now...


He is unfit to be president.

And sooner or later he is going down....

Once again Trump has taken lemons and made lemonaid. The fact is he payed taxes, at a higher rate than Obama, Sanders and even the NYT. He just won another round in the battle to take him down. We should be cheering for the alternative is Mike Pence, and he is a cross dressing Hillary with more Bible.

It was a summary of his 2005 taxes. Doesn't really tell us much.

Trump avoided a bunch of tax by bringing forward his $900 million loss from a year where he ran a bunch of businesses into the ground. I don't think Obama ever did that.

"There was so little in those few pages, that one had to wonder whether Trump had leaked them himself."
I don't have to wonder Simon, he did leak them. For one, why 2005? Twelve years ago does nothing to explain what's happening today. We need to see every year, especially 2008 to the present.
It just doesn't make sense that someone who had access to Trump's returns would "leak" a partial 2005 return.
Until we see the whole picture, I look at this as more spin from the Oaf of Office trying to deflect us from the real facts.
JD

These documents do provide some "cover" for Trump with his base. they will think he is a successful businessman, as he said he was. Now for some of us we know what he made and paid isn't much, in the grand scheme of things. however, to people who live in the rust belt, it will seem a lot because no one around them has that much. Live in Vancouver or Toronto, what he paid in taxes gets you a nice house and renos. yes there are houses in Vancouver which cost over $20 or $30 million.

Paying what he did in taxes will make it appear he does pay a lot in taxes and it may bolster his claims millionaires pay too much in taxes. $38M is a lot of money to many of us, but again in the grand scheme of things, not so much. One house in Vancouver is listed at $21M.

this distracts from health care debate and the Trump tweet regarding Obama. any time he can take the "heat" off of those two items, even for a few minutes are a few minutes gained for him. His up coming "road trip" is just another method of deflecting from the real issues at hand.

These rallies of Trumps are starting to remind me of the rallies Hitler had during his reign of terror.

Today we will see how the Trump effect works in the Netherlands.

Almost everybody would want to help their kids. Let's give the credit where it's due.

How old was Trump the last time he had to go to daddy for a massive loan, a guarantee for the bankers, a casino chips "sale" or an advance on his trust fund? Probably about ten or fifteen years older than your average electrician's apprentice is when he comes out of his time and has to stay off the first roundup list on his own hook. Some of them might still be able to run to daddy when they get into a jackpot but, if they do, they have to wear it. This overly ripe apprentice has never faced the requirement to wear anything that might have damaged his fragile self esteem. Good work, if you can get it.

Remember: these are businessmen; this is business. So we've been told often enough.

And yes, he did leak the pages or caused them to be leaked. Or maybe one of his pals or trusted flunkies decided to do it on their own. Pretty selective stuff, wouldn't you agree? Why would a leaker with malevolent intent toward Trump decide to select nothing for inclusion in the leak that could hurt him? Just seems like a pathetic attempt to intensify the suggestion that "there's no 'there' there".

It does seem likely that he leaked the two pages from his tax return of 12 years ago. Just one more case of the Trump dog and pony show. I fear the next crisis, when Americans and the world need to hear and believe what the he says. Too many uncertainties....hoping he can't last much longer. As someone once said, the President is supposed to age while in office, not the rest of us.

I don't want trump to "age" in office. I want him gone. Not believing in wishing people death, I will simply wish him a heart attack large enough to keep him out of office and resting at his golf course forever.