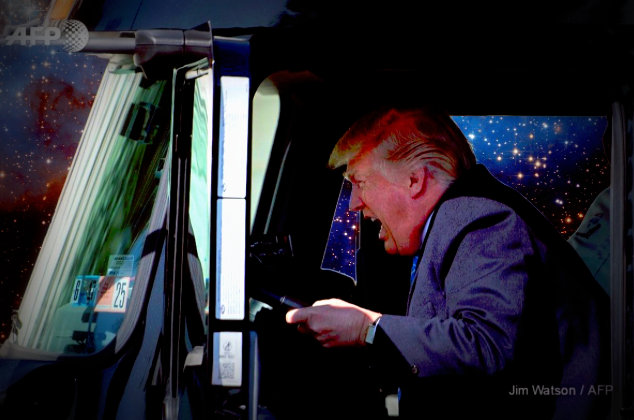 Well there he was yesterday, sitting behind the wheel of a monster truck, looking like he was about to start mowing down his many enemies, real or imagined.

And neither is his plan to destroy Obamacare.

President Trump issued an ultimatum on Thursday to recalcitrant Republicans to fall in line behind a broad health insurance overhaul or see their opportunity to repeal the Affordable Care Act vanish, demanding a Friday vote on a bill that appeared to lack a majority to pass.

So Trump is now giving Republicans an ultimatum, pass my bill today, or ELSE. 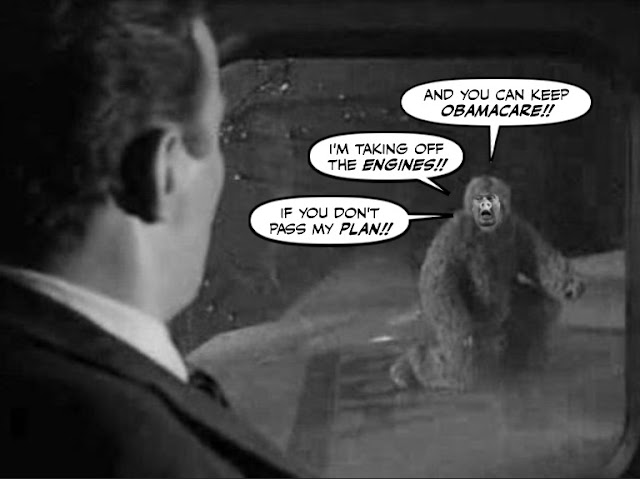 But then Trump's entire budget plan is a nightmare.

Everything from the Environmental Protection Agency to the National Endowment for the Arts, is being killed so that Trump can increase the Pentagon's budget by more than $50 billion dollars. 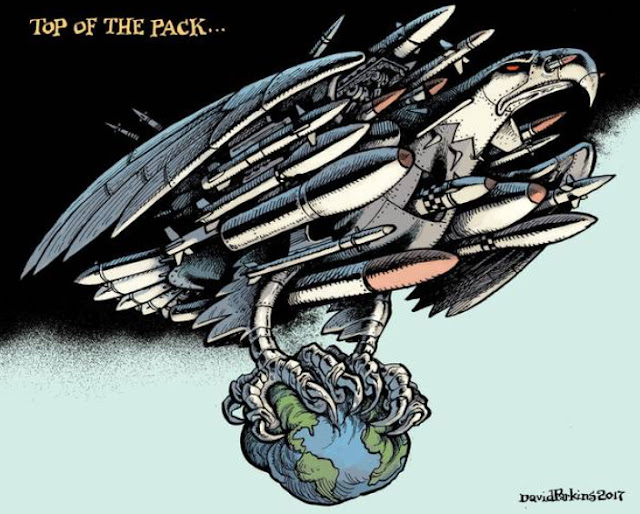 So the U.S. can rule the roost even more aggressively than it does now.

But luckily Trump's having another very bad week, and as Samantha Bee reports, his so-called Hard Power Budget is definitely drooping.

You know, I find it hard to listen to Trump's budget director declaring proudly that  they're not going to "waste money" fighting climate change anymore. It makes me question my own sanity.

But sadly for him and Trump, it is promising to be as hot as hell this summer.

And as you can see by this big red monster in the Gulf of Mexico.

Water temperatures at the surface of the Gulf of Mexico and near South Florida are on fire. They spurred a historically warm winter from Houston to Miami and could fuel intense thunderstorms in the spring from the South to the Plains.

A lot of his supporters are going to be hit by powerful storms. Or baked in their beds.

And when those supporters realize they've been conned by a maniac they're not going to be happy.

And you know where Trump is going... 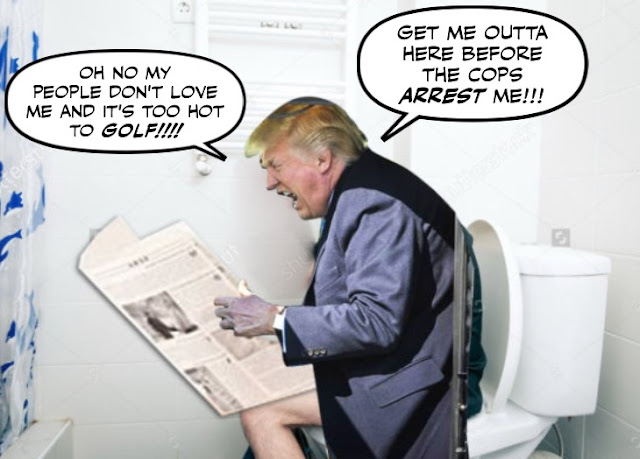 If he isn't first arrested for treason.

It is an American horror show.

But it will have a happy ending.

Weird thought, but is it possible that he made his bill so horrible that even many Republicans would reject it, because he really didn't want to get rid of Obamacare, but wanted someone else to blame for backing away from repealing it?

I ask because I find making sense of Trump's actions difficult.

Both bills are as hideous as the man himself. He will turn back the clock a generation on climate change unless the emitters and polluters realize he is a one term aberration and all of their progress will have to be repeated once he's impeached("From Russia With Love"), he dies(massive stroke) or is defeated in 2020.
They would be wise to continue cleaning up their act because the cost of reverting back to the old ways then back again will be HUUUGE!
JD

He didn't "make" the bill. It's Ryan who presented it.

The republicans dodged a bullet or rather chickened out pulling the trigger. They have no plan other than to enable big business profit. People are still signing up for Obamacare and now there will be another huge surge in applicants.

For many of those polluters will not be ingoring global trends no matter what Trump does.

Simon, I just wanted to give you the heads up. It is Friday night and Michelle Rempel is on her flight home drunk tweeting and ranting about the Trudeau Beast.

How many Americans could receive free healthcare, and for how many years, if Trump diverted that 50 billion dollars away from the Pentagon budget???

hi Gyor... I don't think Trump was that devious. I think he just underestimated how difficult trying to come up with a better system would be. As well as failing to understand how strong is the resistance from the Koch brothers and other extreme right-wingers, to any kind of moderate reforms. And lastly but not leastly I don't think Trump cares much about what happens to healthcare in the U.S. He's made it pretty clear that he would rather focus on tax breaks for the rich. Bad healthcare can kill the poor, but profits are sacred....

hi anon 4:22...Ryan may have been the frontman and Breitbart's favourite scapegoat, but Trump is the president, he talked a lot about Obamacare during the campaign, so he must share the blame for the whole debacle...

hi JD...Trump's whole agenda is an assault on the vulnerable and an assault on reason. And if all his insane plans have anything in common is the absolute lack of any empathy for those affected by them. For Trump Obamacare is a mere political calculation, and the pain of the poor who depend on it doesn't seem to register. But while it's hard to quantify pain, climate change is becoming more and more of a threat, and if Trump thinks he can get away with sabotaging any efforts to fight it, he will pay a big price. When the sea gets angry, we should all be worried....

hi anon...yes, even after attacking Obamacare for seven long years, the Republicans had no proper plans to replace it, beyond funnelling more money to the greedy insurance companies. The interesting thing is how attached many Americans, including many Republicans, have become to the idea of a national healthcare plan. The goal posts have moved and Americans have Obama to thank for that...

hi Gyor...that's true, going green is after all the only way to prepare for the future. So Trump isn't doing the larger interests of the United States a favour. But still, he can do a lot of damage, and at a time when the threat of climate change is becoming very hard to ignore, it's the last thing we need....

hi anon...thanks, I have to depend on my friends for news of Rempel's Twitter activities, since she blocked me years ago, for no good reason. But I will check out what she has been up to, and it might be something I'll write about this weekend... ;)

Hi Simon, please do. She plays the moderate and then dogwhistles constantly to the Rebel crowd. Here is a tweet she liked last night: https://twitter.com/ThirdWatchca/status/845433237757480960

I'm not sure if we're on exactly the same page. But California set the emition standard and countries like Germany and others invested deeply in research of fuel injection and catalytic converters ect. I find it difficult to believe the world is going to turn back now. Though I do enjoy my 63 year old 1055 cc gas guzzler. It can still do more than 60 but only gets less gas mileage of today's cars with over 150 hp. I could supercharge it but it's fuel economy would be even worse and the time between rebuilds minuscule.

the toilet ought to be gold and his legs are fatter.

climate change. the environment. gee if the seas rise where does he expect to live? The climate has changed over the centuries. However, the effects of it were not so pronounced given there were far fewer people on the planet. As we have increased earth's population even an idiot like Trump must be able to understand it will have an impact and that impact needs to be minimized because it will compound the change of climate which occurs naturally. the decision to deny climate change is simply a way for corporations to not have to spend money on protecting the earth. its all about corporate greed. protecting the environment means we have clean earth to grow food, clean water to drink, and clean air to breath. Haven't the republicans see the air in Beijin lately.