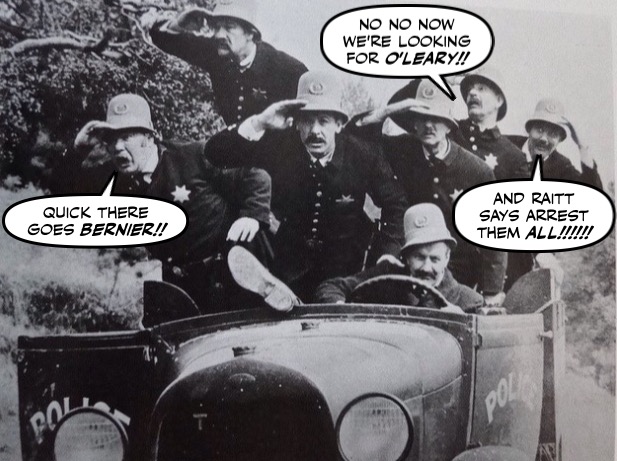 In one of my last posts I wrote that the Con leadership race was starting to look like a crime story.

And I suggested that it might be time to call in the police.

Or at the very least the Keystone Cops.

Because that grubby leadership race is becoming more and more farcical. 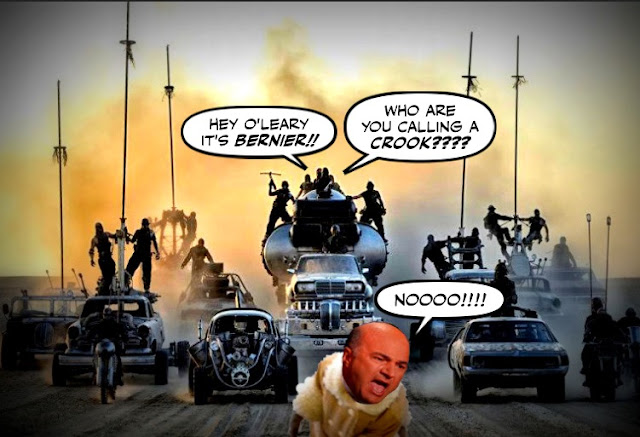 For while just the other day Kevin O'Leary was accusing Maxime Bernier's campaign of trying to rig the vote.

Now it's Mad Max who is going after Mr Marvellous and accusing him of buying votes.

While Lisa Raitt is demanding that all cheaters should be expelled. 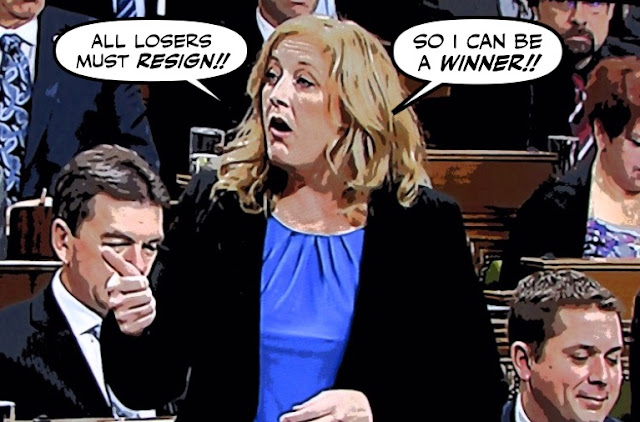 Conservative leadership hopeful Lisa Raitt is calling on the party to expel any leadership candidate caught cheating and to impose hefty fines on their campaigns.

“I am calling for the expulsion of any candidate found to have broken the leadership rules and a significant fine for any campaign found to have authorized this type of activity,” Ms. Raitt said in a statement Monday. 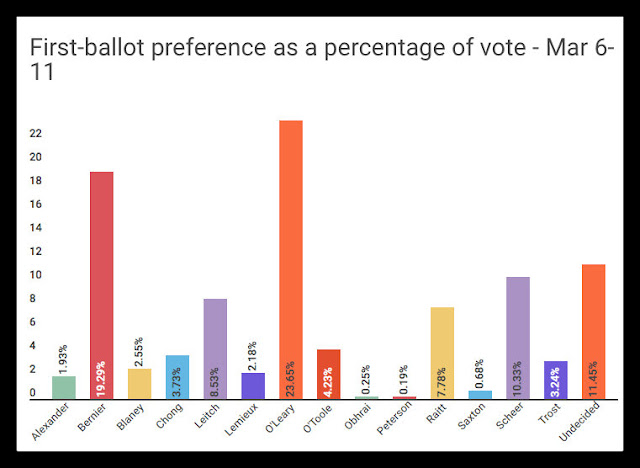 Unless she can eliminate her rivals she's not going anywhere eh?

So her position is about as high minded as this statement from Bernier's faithful fluffer Tony Clement.

"It is very disturbing and doubly disturbing that Mr. O'Leary was so keen to throw stones at other campaigns, yet he was very clearly in a glass house," Conservative MP Tony Clement, a senior adviser to the Bernier campaign, told The Globe.

"This is the height of hypocrisy and it illustrates that his campaign is up to no good."

Which is also pretty hilarious considering how close Clement and O'Leary once were.

Back in the days when Muskoka Tony was hoping that Mr Marvellous would help make HIM leader... 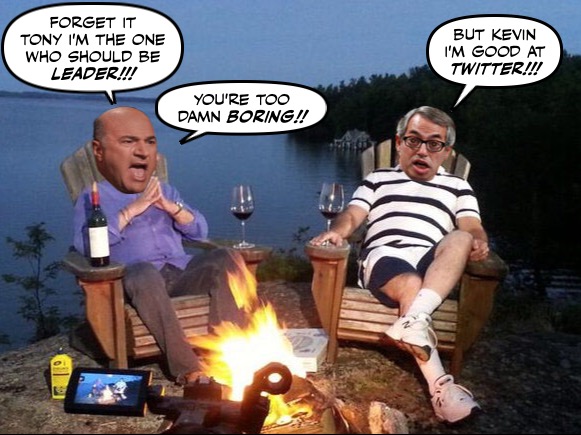 Only to be so cruelly disappointed.

But of course for the Cons it's no joke. As the veteran Keith Beardsley points out here.

I see that the fun and games have begun in earnest as Tory leadership candidates insult each other and toss accusations of cheating around. All of this coming after O’Leary went public and accused someone of rigging the leadership election.

Sadly none of the candidates that have expressed their outrage have also considered the damage that they are doing to the party brand.

All this mudslinging can only make the Harper Party even less popular.

Which as Harper's former flak Andrew MacDougall says, should be giving the leadership candidates a real pain in the neck.

Nothing concentrates the mind like the prospect of a hanging, and right now Conservative Party leadership candidates are checking their necks for the presence of a noose following allegations of membership vote-rigging.

And Lisa Raitt's attempt to eliminate the opposition isn't going to make it better... 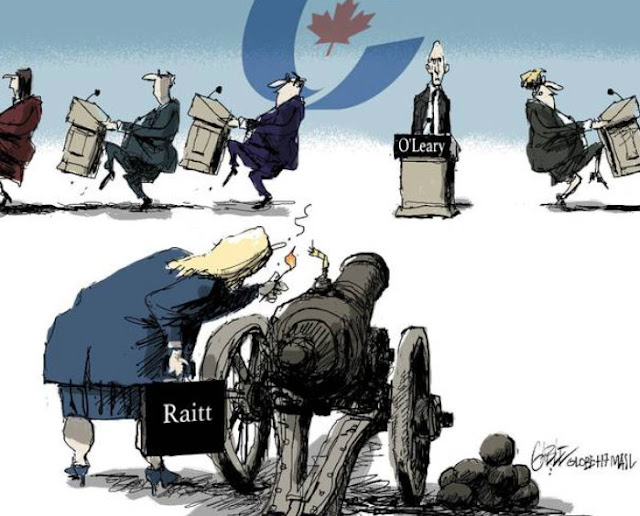 Lisa Raitt, who is now asking the party to expel any campaign found to be in violation of the rules. Other moribund campaigns are undoubtedly hoping for the same. Talk about aiming low.

Valedictorian isn’t much of a title when it’s won at summer school, where it feels like most of this Conservative leadership race has been run.

Not when the larger problem is the mediocrity of all the candidates. And for that MacDougall blames Justin Trudeau... 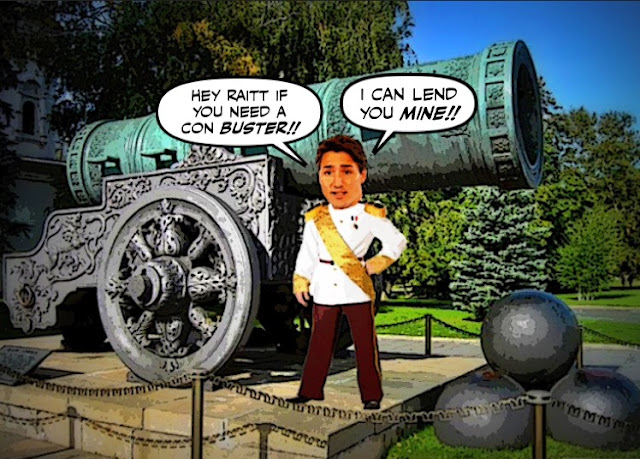 But here looms, as it does in so many dark Conservative corners, the shadow of Mr. Trudeau. The long-shot prospect of defeating Mr. Trudeau in 2019 is what kept most of the Conservative Party’s heavyweights out of the leadership race.

The one who wasn't ready, but is now carving up the Cons like turkeys, and is as I predicted soaring in the polls. Again. 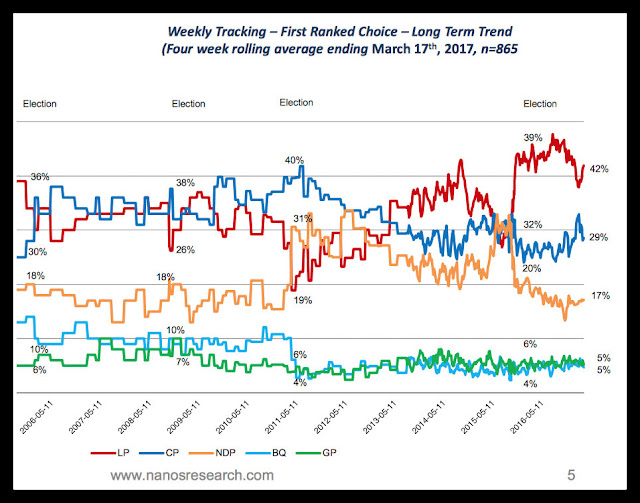 And since the Cons are probably going to lose even more support as more Canadians hear about that sordid vote buying scandal.

And with the NDP apparently going nowhere... 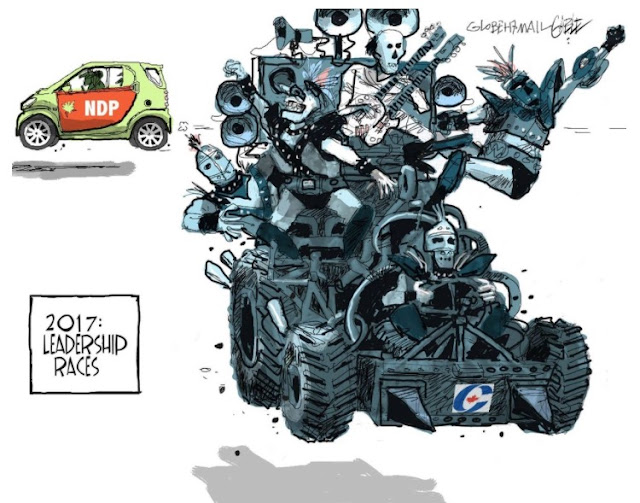 It really does look as if Justin Trudeau is going to be prime minister for a long, long, time.

The winter of our discontent is finally over.

The NDP race is filled with likable people, who actually have ideas beyond destroying the social safety net, picking on immigrants, or other CPC lunacy.

And by the next election I think you'll find Trudeau far more vulnerable then you expect.

He's broken some major promises, enough that even some Liberal Bloggers have publicly quiet the Liberal party and cut off donations.

The effect hasn't completely seeped into the public yet, Trump is simply too much of a distraction, but eventually it will.

And the NDP has some strong candidates for leader.

Personally I'm leaning heavily towards Guy Caron, he charming, good in both official languages,
as an economist he will be taken seriously, has a sense of humour, but does not come off as shallow.

And he ACTUALLY has a plan for Canada's future, unlike Trudeau who only has plans for getting elected.

I am excited by Guy Caron's basic income idea.

I think they should all undergo Kellie's values test while hooked up to a polygraph.
I wonder if any would pass?
JD

As much as I don't like the conservative party it is a sad commentary on Conservatives in this country that the party has come to this and the number of not so great candidates for leadership. for a democracy to be sustained and vibrant there needs to be choices. with none, even the best party will become stagnant and some will develop bad habits. With no one to turn to or rather another party to turn to, things will not turn out well so the Consertives and the NDP need to kick it up several knotchs. the NDP didn't make the best decision when they decided to fire Mulcair. they ought have kept him on until some one else with some profile and decent qualifications came along. In my opinion Mulcair would do a better job than the current candidates.

Without viable leaders for the NDP and Conservative Parties I won't be surprised if Quebec separatist parties start to make in roads in Quebec again. From many of the Quebec voters it would be the only way to send a message to the federal Liberal Party if they were unhappy with them.

Quebec is very happy with the federal liberals.

hi Gyor...I might write something soon on the NDP leadership race. As you may know I did vote for them in the last election, so I feel the need to explain themselves. But what I will say right now is that I am not impressed with any of the NDP candidates. The NDP needs to come up with a new vision for the 21st Century, and attacking Trudeau like they attacked Harper is not going to work for them. All you have to do is look at the polls to see that all their efforts to date have got them absolutely nowhere. And my position remains the same. I will always support the progressive leader best able to defeat the Cons, and right now that's Trudeau....

hi JD...I very much doubt that any of them, with the possible exception of Michael Chong, would pass Leitch's test. And needless to say she certainly wouldn't. I don't know what planet she came from, but it's certainly not one I would like to visit....

hi e.a.f...I agree that a good opposition is important in a democracy. But both the Cons and the NDP are coming up short. The Cons are the Cons and they will never change. But sadly the NDP is not much better. They are so fixated on attacking Justin Trudeau they have lost sight of the larger picture. And unless they renew themselves and change their tactics, I'm not sure they'll be around for much longer....

It will always be Trudeau, he is formidable