Catching Up With the Adventures of the Republican Clown Donald Trump 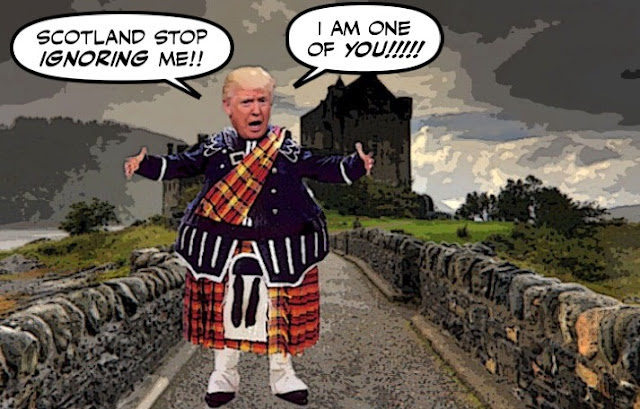 During the almost three weeks I spent in Scotland, I wasn't able to follow the adventures of the RepubliCon clown Donald Trump as closely as I normally do.

Because as you may know, most Scots can't stand Trump and would rather ignore him.

So you can imagine how surprised I was to turn on CNN when I got home last night, and see the angry orange sounding almost reasonable. 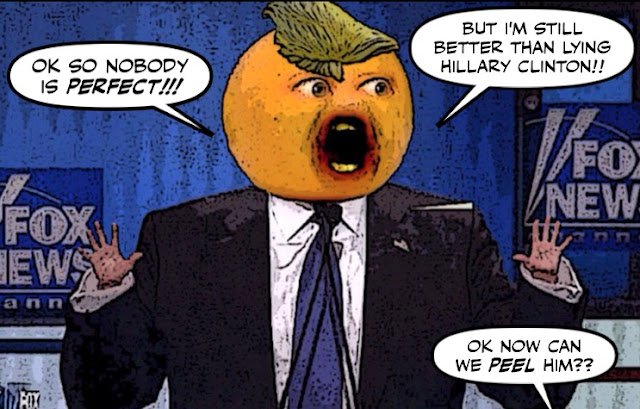 By not only claiming he's sorry about some of the things he has said.

Donald Trump on Thursday shelved his guiding mantra -- never back down, never apologize -- and did what he has refused to do in public in more than a year of campaigning. He expressed regret.

"Sometimes, in the heat of debate and speaking on a multitude of issues, you don't choose the right words or you say the wrong thing. I have done that. And believe it or not, I regret it. And I do regret it, particularly where it may have caused personal pain. Too much is at stake for us to be consumed with these issues," Trump told supporters here.

But also by trying to reach out to black voters.

Reading from a teleprompter, the businessman vowed as president to address the poverty and unemployment that has disproportionally affected African-American communities and urged black voters to "give Donald Trump a chance."

"The result for them will be amazing," he said. "What do you have to lose by trying something new?"

Even though as Charles Blow points out, most of them despise him.

All of black America is looking askance at Donald Trump. He has no credibility with black people, other than the handful of black staffers and surrogates who routinely embarrass themselves in their blind obsequiousness.

Donald Trump is the paragon of racial, ethnic and religious hostility. He is the hobgoblin of retrograde racial hegemony. And this is the man who now wants to court the black vote? Puh-leese …

And his decision to hire the white racist Stephen Bannon as his new campaign  chief executive can only make matters worse.

“If anyone sat there and listened to that call, you’d think that you were attending a white supremacist rally,” said Bardella, citing what he called Bannon’s “nationalism and hatred for immigrants, people coming into this country to try to get a better life for themselves.”

So the new Trump still looks a lot like the old one... 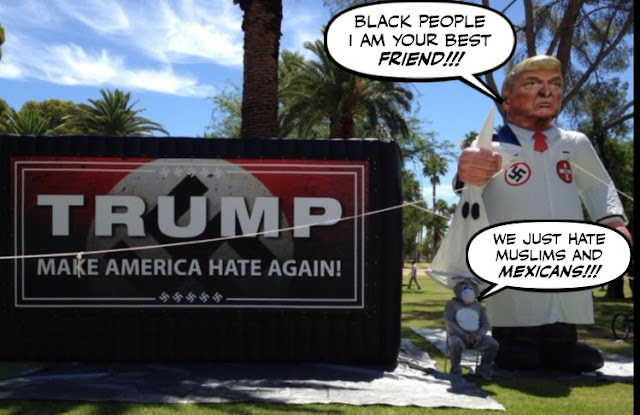 And this at a time when even some of his white male supporters are deserting him.

Donald J. Trump’s support among white men, the linchpin of his presidential campaign, is showing surprising signs of weakness that could foreclose his only remaining path to victory in November.

If not reversed, the trend could materialize into one of the most unanticipated developments of the 2016 presidential campaign: That Hillary Clinton, the first woman at the head of a major party ticket and a divisive figure unpopular with many men, ends up narrowing the gender gap that has been a constant of American presidential elections for decades.

Which tells me that the more Americans watch Trump in action, the more they dislike him.

Or the more they laugh at him. 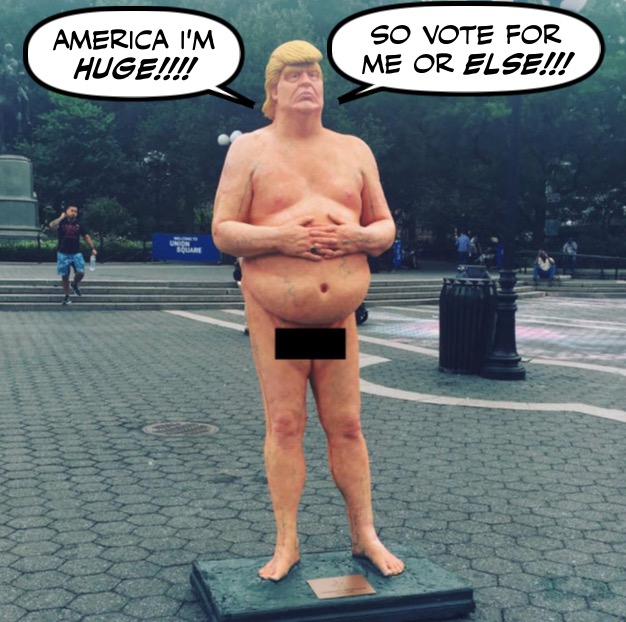 Statues of a veiny, naked Donald Trump appeared in New York, Los Angeles, San Francisco, Cleveland and Seattle on Thursday morning. Anarchist group INDECLINE took credit for the statues, releasing a video of the process of creating the bright, unflattering images of the Republican presidential nominee.

They titled the project The Emperor Has No Balls, a play on the idiom "the emperor has no clothes," and highlights the part of Trump's anatomy that is missing from the artwork.

And it seems even the cats aren't impressed.


Gawd. When I recover from my serious case of jet lag, I'll try to make sense of all this and anything else I might have missed.

But from what I've seen so far, I think I can safely say that the mad Emperor still has no clothes

And as I predicted before I left, he's still heading for a fall.... 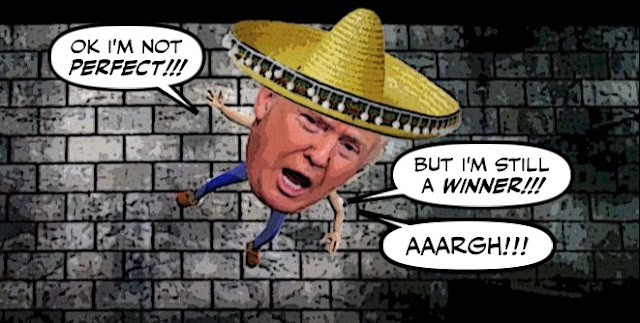 I am still predicting a Trump win. Hillary has three big anchors that will take her down. The Clinton foundation, the DNC hack and her health.

I was reading an old post of Simon's from a few years back and Thwap called you "an idiot" in the comments. Appears not much has changed. Good luck with *that* prediction, pal. lol

could be true, but its not a Jesuit debating point for sure

As I've said before, there's no way in hell Trump will win regardless of Hillary's baggage or health. Trump's own baggage and ongoing campaign of hatred and division will see to that even though he tries to reach out to those he vilifies.
Anyone who thinks Trump will win are either cut from the same cloth, or are seriously deluded.
JD

funny
trump says he wants to be a president and we all believe him...

at first, trump never looked past the publicity opportunity.
now, realizing that he needs the political machine to win, he faces two choices - either he sticks with his original plan and stays happy with being famous for having run for a president (this means that he'd be quitting on his terms - the likelier scenario) or he continues to satisfy his curiosity to see how far will the americans let him take his donald (and yes, i am referring to his hands, here). so far, he continues to go through the motions of flirting with the electorate but his campaign is falling apart because the donald-rhetoric is no longer accepted by his republican backstage and the conventional way of doing politics is not making any sense to him. so, he flails. it isn't the flailing that will change because neither the machine, nor the donald can be changed at the same time. the donald will vote for a golf course before a day's hard work any day and those who know how much work it takes to run a country will never let him.

hi Steve...I suppose Clinton could still be damaged by some kind of financial scandal, but that story about her health sounds like fiction or wishful thinking. And I just finished reading Trump's "medical report." and it looks like fraud, or something Trump himself might have written. I'll be writing something about that soon and you'll see what I mean. In the meantime dream on...

hi JD...I agree with you. With every passing day his chances of winning are growing slimmer. Some are even suggesting that he is sabotaging his own campaign, so yes I too think that Steve and others are only deluding themselves...

hi Luce...thank you I'm glad to be back. And yes I agree with you. Trump is now strongly suggesting that the election will be rigged, which I think is probably his way of softening the blow that is coming his way, and saving some face. I never believed that he was really interested in being President, and was just looking for a way to boost his brand. It worked out better than he ever imagined, but I think he's terrified by the thought that he could actually be President. I think what we're witnessing may well be the biggest scam in the history of the United States. And the more Americans come to believe that, the greater the chance that Clinton will win by a landslide...

Rob Ford Rob Ford Rob Ford. In the words of Jim Morrison I want Trump to win because the whole shithouse needs burning down and he is just the guy to light the match. If Hillary wins the next president will make Trump look line Mr Rodgers, a Cruz, Rubio over something even worse.

Omar all you do is insult people. Go back to whatever cave you're from.

It's the Annoying Orange not the Angry Orange lol :P