Rob Ford and the Day The Cons Fought Each Other 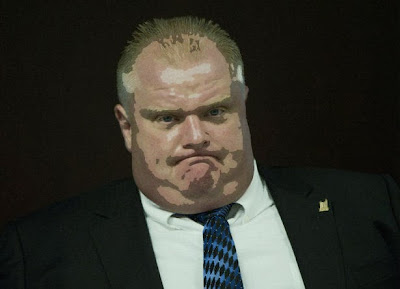 He's a bigot, a bully, a boozer, a beast. He's shaming us in the eyes of the world.

Each time Ford appears in the media, it's another eerie reminder of what we've become: crude, swaggering, bungling, irrational and mendacious. We've reached that staggering moment in a brilliant horror film when our protagonist realises the truth: Rob Ford is the New Canada. He is us.

But I see that Rob Ford has at least one redeeming quality eh?

He's making the Cons fight each other.

Bitter divisions inside Stephen Harper's cabinet over Toronto Mayor Rob Ford recently erupted on the floor of the House of Commons and triggered a profane battle between two of the prime minister's most powerful ministers.

In a voice loud enough for several of their cabinet colleagues to hear, Flaherty told Kenney to "shut the f--k up" about Ford.

"I thought they might come to blows," said one MP who was not authorized to speak publicly about the incident.

And telling us so much about the true state of the Con regime... 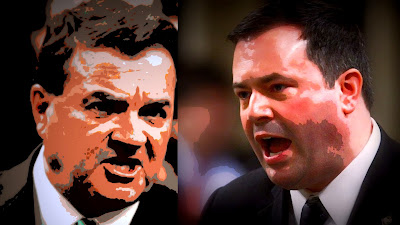 Where Jason Kenney has gone rogue because he wants Harper's job so much. Jim Flaherty is losing his judgement, while counting our money.

Other caucus members are also cracking under the strain.

There have been other examples of escalating tension between caucus members spilling onto the floor of the House. This past week, Conservative MP Kyle Seeback apologized for calling fellow Conservative Brad Butt a "bitch" during a loud exchange on the Commons floor.

And Stephen Harper won't cut Rob Ford loose because he still needs him so much.

Sources tell CBC News that some Greater Toronto Area caucus members resented Kenney's comments because they flew in the face of strict instructions to avoid commenting on the Rob Ford scandal because of the Toronto mayor's enduring popularity in some key federal ridings.

So he'll never get that monkey off his back, and he'll be dragged down just like the rest of us... 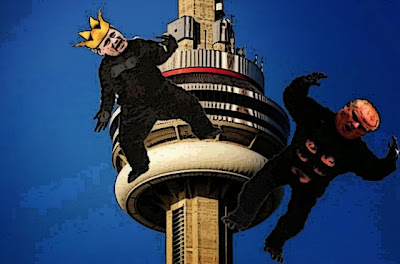 Yup. The Cons did many terrible things. They shamed us as much as Ford did.

While different in their public demeanour, Harper and Ford are flip sides of the same hard-right coin. And that makes the image of Ford all the more unsettling. What was once Canada the cool, the country a 1991 Economist cover story called the "post-modern nation-state", has now devolved into a rightwing hellhole.

But in the end they were just a JOKE.

And before we could defeat them, or the police could arrest them.

Priceless, and couldn't happen to a more deserving bunch of thugs. I cringe anytime I see one of Flaherty's stupid quotes in the media taken as some brilliant revelation. He is a complete idiot and so richly deserves to be cornered into the ford nation camp. As for Kenney, bring him on, I can think of a better con to go into the 2015 election. I can't see the red neck faction getting behind that turd in an expensive suit.

Harper and Flaherty campaigned very hard for Ford. They are all very good friends. Harper also campaigned very hard for Saulie Zajdel. Some of Harper's degenerates are on their way to prison. So, it shouldn't be a surprise to anyone, Harper and Flaherty fully support Ford. Harper as a Fascist and a Dictator, controls everything. Harper has blocked and stonewalled every investigation against him.

Harper and his so called Cons have embarrassed Canada and the Canadian citizens. Calandra is Harper's Goebbels a ranting raving lunatic, for the entire world to see.

hi bcwaterboy…yes it is rather a good show isn't it? I mean when they start calling each other "bitches" you know the end can't be far off. ;)
And of course beneath these little eruptions are massive fault lines in the Reform Con Party that could eventually tear them apart. The next six months are going to be VERY interesting….

All this chatter about Harper's dominance of the Party is theatre, of course. The Party is dominated by the money behind it. As long as Harper's governance and stance was seen to be effective (and, more important, as long as it was perceived that no alternative was available to Harper, the Cons major donors stood pat. However, they're now quietly backing away. I expect a Mulroney scenario - PM with an almost impervious ego declared victory and resigns, to be replaced with a high profile sacrificial lamb.

hi balbulican….yes you're right about the money, and I saw an article in the Hill times the other day that reported that donations are way down, and that the Liberals actually raked in more money this last summer than the Cons did. Like you I'm hoping that Big Oil and company will see Harper as a liability and help push him out of the door. And of course if the sacrificial lamb is Jason Kenney, I want it served on a platter with mint sauce…. ;)

If I'm not mistaken, neither Muslims, nor Jews are allowed to eat the 40 something year old virgin Kenney.