The Slow Destruction of the Harper Regime 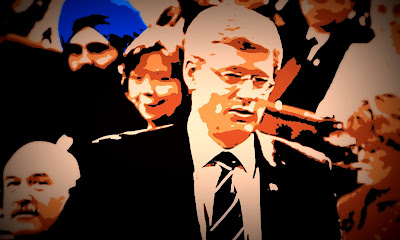 It's like a danse macabre. It's hard to know how much more he can take before he implodes.

Or does something crazy.

Because it's all going horribly wrong. The opposition has him in their sights.

And in all the years I've been watching him, I've never seen Stephen Harper looking so defeated and so desperate.

He's getting clobbered from every direction. His Senate Monster is mauling him.

Prime Minister Stephen Harper continued to defend the Senate Wednesday as opposition MPs took aim at the number who wouldn't answer CBC News questions about where they really live.

After weeks of questions about living expenses and whether some senators live in the right province and qualify for their seats, CBC News found 25 of 104 senators either refused to say they had proof of their primary residence or wouldn't respond to questions. Most of them — 21 — were appointed by Harper, who came to power in 2006 promising accountability and Senate reform.

Thomas Mulcair is pounding him on the EI issue.

NDP Leader Thomas Mulcair announced Wednesday he is beginning a cross-Canada rallying effort to protest against employment insurance cuts and the government's plan to send inspectors to the homes of some EI recipients. Ratcheting up the rhetoric at a press conference held in the foyer of the House of Commons, Mulcair called the civil servants tasked to make house calls the "Harper Macoutes."

"All you're doing is creating a greater demand for social assistance and a greater demand for welfare at the same time that the government is cutting its employment insurance," Rae said. "It's an affront to the nature of Confederation itself. All the government is doing is saving money on the backs of the provinces, and on the backs of working people."

And that one really hurt eh? You should have seen Harper jump like he'd just sat on a cattle prod. Because as I have explained before, that's how he plans to kill medicare, by making the provinces too poor to afford it.

Even as he leads the country to economic disaster.

Canada’s fourth-quarter GDP figures, out on Friday, are expected to show the clearest picture yet of the shift the economy has been undergoing for the per past year or so. For the first time in nearly seven years, monthly GDP numbers have already revealed, Canada underperformed the U.S. in 2012.

Even as hundreds of thousands of Canadians and their families will soon be fighting to survive.

Mulcair warned about what he called a "black hole" that would be faced within weeks by "hundreds of thousands of Canadians and their families as they have nothing to live on."

Oh boy. Can you believe what those ghastly Cons have done to Canada? This isn't just a car crash, this is a full fledged SHIPWRECK.

And the good news? If all those decent Canadians are heading for that black hole. 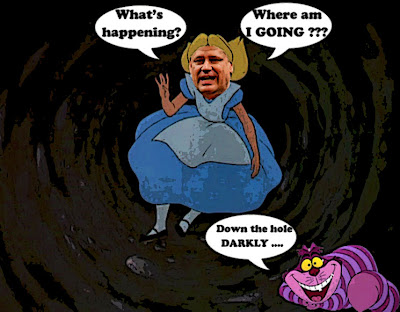 He has lost nearly one third of his vote since the last election, and now we have him and his foul Cons where we want them. Stripped bare and DESPERATE.

Not that it really matters eh? I'm sure whatever animal sounds they make will be music to my ears.

Down the hole darkly...

Mulcair has him getting so angry he stands up and shoots off his face. Answers like a grade five. "You only want to kill my senate bill because if you get into power you want to appoint your own senators" And he actually looked pleased with his childish rebuttal.

Harper gives our resources and resource jobs to China. Harper's Omnibus Bill gives China the right to sue, any Canadians who get in China's way. 300 BC miners applied for the 200 BC mining jobs, that Harper had given to China. Then he sends his E.I. Police to bang on Canadians doors, as a threat.

Most young family's and single mothers can't afford to move. It literally costs thousands of dollars, to move to a different job location. Harper damned well knows this. I too believe. Harper wants to destroy E.I....So the provinces will have to pay these jobless people welfare. Which is the provinces liability to pay.

Chinese resource workers earn, $800 per month. That doesn't even pay the rent for Canadians. Now, the cost of food, is being jacked up again. Canada has the highest cost of living, in all of the America's.

Then our tax dollars are stolen, to buy property for Harper's Cons. Harper's abuse and theft of our tax dollars, is the worst in history. Harper's legal fees are through the roof. Never has a P.M. ever been sued as many times as Harper has.

Harper's dark hole is the ninth ring of Dante's Inferno. That's where he belongs.

I dislike Harper as much as the next person, but he's got three more years of importing Karl Rove Republican-style electioneering before Canada has a chance to vote him out of office. Three years of removing all the safeguards that are supposed to protect our democracy from big money interests and electoral cheating. Three years to find out a way to distract an electorate with the long-term memory of a gnat from how Harper and his cronies are selling out the country to international oil interests. Three years to take advantage of the three-way vote splitting on the left.

The Liberals were in power for 13 years. I'm not confident that Harper's reign will be less than that.

hi kev...I can't remember those Mulroney time, just the distant rumble of scandal humming in the background. But yes it does seem like the final years of this regime. So much was forgiven by so many at a time when the economy was ticking along, no thanks to them. So when it tanks, as it almost surely will, it will be a brutal awakening. But happily for us, just in time for the next election... :)

hi anonymous...yes the exchanges between Mulcair and Harper have been something to watch lately. Mulcair has been going after him in an extremely ferocious manner, and Harper is definitely coming off second best. When he's not trying to look like Mr Moderation, which is so horribly fake, he is as you point out sounding like a robot, and making cheap and childish comments. It's both inspiring and depressing...

hi anonymous.... the ninth ring of Dante's Inferno? Is that the hottest part? For I won't settle for anything less. Although I understand that the sixth circle of the Chinese Tar Sands is also a hellish place... ;)

hi sinned34...try to think positive it's only TWO more years ;) But yeah, he could still do a lot of damage before the next election. I'm hopeful that people have just about had enough of him. Judging by the polls he's starting to grate on many Canadians. So if progressives work intelligently together I'm still hoping the bad apple will fall from the tree...

With any luck, the control freak will soon find himself in a giant sink hole that he built himself.

I am still looking for another prime minister who hired someone with a criminal record to sit at his right hand like Harper did with Bruce Carson, whose trial starts next summer. A fraud conviction is not usually a big selling point when job hunting. And child porno Cowboy perv Flanagan steered Harper's boat for the first four years, managed two leadership campaigns, was his chief of staff, ran the Con campaign in 2004, raised money, hired staff, contracted pollsters and recruited people to Harper's goon squad. Meanwhile Harper defends crooks like the Puffster and Pamela Wadlin while sending his brownshirts to unemployed people’s homes and establishing dollar quotas for them. East coast fishermen have their own fucking quotas, and when they catch it, they have to stop. That is seasonal work. Harper and his disgusting, lying, deceiving, corrupt and manipulative Con's are attacking these working people for shitcan ideological reasons. And when these Harper Con TRAITORS made that radical overhaul of the Navigable Waters Protection Act in the last omnishit bill, now we find out through the Access to Information Act the idea came in part from the pipeline industry! Gosh hey?

hi wazz...I always knew that sooner or later the Cons would run into trouble because they are drawing from a very small talent pool, and when their best operatives burn out or leave there is nobody to replace them. So they have to recycle people like Peter Van Loan, what you see is what you get, and it's horrible. But still, nothing could have prepared me or the appalling corruption of the Con regime. They say a fish rots from the head down, and boy does this one stink. We're going to have to get Mr Clean to scrub the Parliament buildings after we defeat them... :)