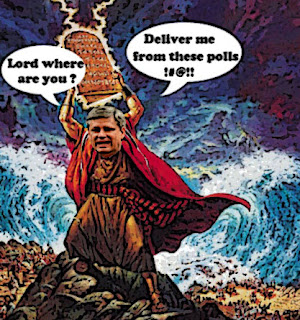 Holy Moly. It looks as if Stephen Harper is having a full blown religious crisis.

The new polls have come down from the mountain, and they really suck.

And to make matters worse, his search for a Messiah to save him, is turning out to be a nightmare.

Despite the recent papal drama in Rome, the Catholic Church isn’t the only religion-focused body with prominent personnel troubles. In Ottawa, the Harper government has spent the last year dealing with a leadership vacuum of its own as it struggled to find a suitable ambassador to lead its long-promised Office of Religious Freedom.

And for very good reasons eh? His rabid Christianist base wants the new Messiah to protect them, but not the Mooslims and all the other religious heathens.

And who can blame them eh? Gawd. What's a poor theocon to do? Hand out another jingly Jubilee medal?

Or pass the ammunition?

Although to be fair, if you check the headlines of the last month, you can see that when it comes to religious groups, they're ALL on a rampage...

So we don't need a taxpayer funded office to protect the religious. We need an office, and an army, to protect us from THEM.

And of course we need somebody to protect us from Stephen Harper.

Most merciful Polar Bear God of the Great White North.

And deliver us from this maniac... 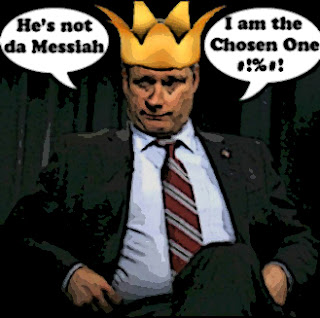 Office of 'Religious Freedom,' hey? Religious freedom is a component of Human Rights. It's worrisome they chose to single out religion as something that needed to protected over something like free speech. This is another attempt by Harper to expand the public service incrementally to introduce government in the private lives of Canadians for pure political gain. Freedom of religion is only one part of the basic civil rights we have earned in this country and it's time Harper and his minions grew a pair and started defending real human rights, not a single right with which many, many non-religious human beings are unconcerned. And if real civil rights were protected, freedom of religion would follow. But Harper has another wedge to exploit.

These CON idiots are putting imaginary floating ghosts in the clouds ahed of REAL Canadians. This Harper government is getting creepier and creepier by the day. We, the citizens, need to take back our nation and boot these simpleton theocrats out of Parliament Hill.

Harper was ostensibly elected to ‘guide us through the recession.’ That itself is a joke and appealed only to the naïve, but he certainly was not elected to impose on us his version of the 10 Commandments. This is just a way for Harper to have government money funneled to the religion of his choice, to encourage more backing and more votes for the Conservatives. It’s all about pandering to the CON religious Christian base. Baird once invited 6 panelists to a closed door meeting of consultations on this new Office of Jesus, and, Hallelujah! Most were from the western provinces and predominantly Christian. One of them was even a foreigner - the American director of the U.S. Office of International Religious Freedom. They were:

Anne Brandner of the Global Peace Initiative and formerly of the Evangelical Fellowship of Canada.

Don Hutchinson, vice-president with the Evangelical Fellowship of Canada.

Susanne Tamas of the Baha'i Community of Canada.

Islam was not represented on the panel, nor were the major Eastern religions, all of which have suffered religious persecution: Hinduism, Sikhism, Taoism, Buddhism, and others. The choice of panelists completely ignored the Canadian reality of multiculturalism.

This shitball office is a vehicle for Christian evangelism and nothing more. Add it to the ever growing mountainous pile of disgusting Harper Con policy. Religious freedom is already guaranteed here. I've already written a letter to my MP in protest to this blatant act of theocracy; I suggest everyone do the same.

hi wazz....the whole thing is a farce. As you point out the way they failed to consult Muslims, Hindus and others just shows what an evangelical front it is, the same sort of thing we've seen in the U.S. And will no doubt suffer a similar fate. The most troubling part is that some in the Con base seem to think that religious rights are equal to, or more important than human rights. When of course they most certainly are not. The day religious rights carry more weight than human rights is the day we return to the jungle, or the desert. We really need to hammer home that message, or as I said in the post we'll end up in a very bad place...