Mike Duffy and the Hoggy Senate 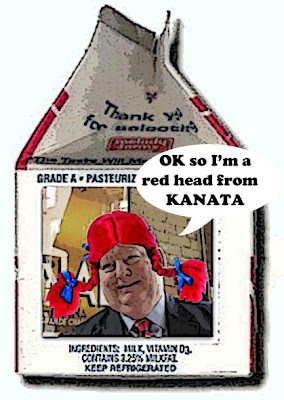 Golly. I knew if we put Mike Duffy's mug on a milk carton something good might happen.

And sure enough, it did.

He took a short walk in the snow, and finally admitted he was wrong mistaken confused.

Duffy blamed the Senate for having unclear rules and forms. "We are going to pay it back, and until the rules are clear — and they're not clear now, the forms are not clear, and I hope the Senate will redo the forms to make them clear — I will not claim the housing allowance."

And no doubt it will only be a matter of time before he retracts what he said the other day:

“It’s none of your business,” the senator said. “I’ve said too much already. When it’s all over, you all will be very embarrassed.”

Because he's a classy guy eh?

I hadn’t heard from Duffy for seven years, but shortly after we launched eFrank into cyberspace in the fall of 2005, he called out of the blue to say he was having problems logging onto our new site and, oh, by the way, did you hear the latest about Peter MacKay?

Huh? Is that really you, Mike? Sworn enemy of the satirical press, gracing us with a hot story tip? Yes, indeed, and for the next three years, he proved to be a wellspring of gossip, promoting his Tory chums and attacking colleagues he disliked at CTV.

Even if he is a dummy.

And no doubt the PMO will be putting out a communique saying something like this. "Senator Duffy has admitted he made an honest error. He has repayed the money. And is now free to continue his excellent work on behalf of the people of PEI, from his home in Kanata."

Which will no doubt be followed in due course by another statement, claiming that Patrick Brazeau is just a misunderstood poet.

I'm wounded not, but I'm not slain. I'm brusied and faint they say Just let me lie and bleed awhile; I'll not be long this way.

And how can he be expected to fill out those terribly confusing Senate forms, when he can't even SPELL ?????

And in time, there will be another statement from the PMO, also released late on a Friday afternoon.

Claiming that the Flying Wallenda Wallin is now cleared to land... 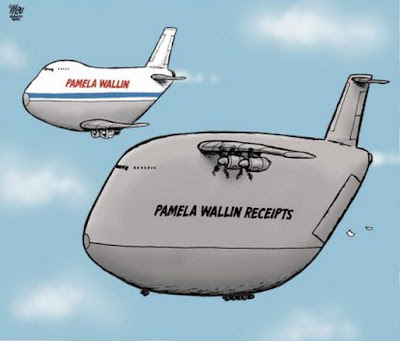 And when it's all over, some Canadians will probably be as confused as Duffy eh?

And say who knew that Senators could be as innocent as lambs?

Or that Stephen Harper wasn't feeding them.

But of course, I won't be fooled eh? I'll just keep repeating what I've always said.

Make Stephen Harper wear this scandal all the way to the next election.

Before it embarrasses us further...

If he can't figure out the form, he shouldn't be in the senate. stevie slime has enough money in the budget for these scams but not for a Coast Guard station in B.C.. As I commented on a previous blog I suspected the cons were going to sell the land the station sits on. lThis evenings news on global advised Jim Sinclair, President, B.C. Federation of Labour has copies of emails which outline stevie slime and the slimes program to sell the land along with a vast slab of land by Jericho beach in Vancouver and the former RCMP E division headquaters on the west side of Vancouver. These parcels of land in Vancouver are worth a fortune and the feds have been in negotiation for these lands for some time, hoping to conclude the sale by 2014.

Watch out for what stevie slime and his slimers may want to sell in Ontario and Quebec. have a good look at what is federal and which some foreign entity wants. I am of the opinion the Vancouver Coast Guard station and the other lands are being sold to a chinese corporation, who knows maybe for more housing for the foreign workers.

Oh Simon, that dog and lamb video is so sweet. It is the farthest thing from anything Harper Regime related. Feeding an orphan is honourable - plying overfed senators with gravy is not.

Yes I think you summed it up well. I would only add that some of these Senators seem to have so many homes I can't understand why their their salaries aren't enough.
BTW..speaking about the Coast Guard station, did you see I wrote a post about that awful situation yesterday? I was angry then, and after reading that the Feds plan to sell the land, I'm even angrier today. The Cons really are the limit...

hi Beijing...I was planning to use that cute video in a blog about all things nice, because I'm so sick of all the bad news that every day seems to bring. Then I saw the Duffy story, and since I had written about it, I felt obliged to follow it up. But I was determined to keep the video, and as you can see I found a way to get it in. However, now that I have I want to publicly apologize to the dog and the lamb for having to share the post with all those ghastly Cons... ;)

yes, I read it. It was good. The Coast Guard is vital on both coasts. Unfortunately money is the first thing the slimers think about, not for us but for themselves. How can they pay for shipping stevie slime's cars around when they spend money on a coast guard which only is supposed to save citizens. I am sure the decision to originally cut short the search in the east was to save money. they figured no one would complain, too much or hear about it. The search should have gone on longer and with more intensity.

The Coast Guard has been underfunded in Canada and under resourced. It has always needed more boats able to go out in storms. It needs more helicopters which can rescue people more effectively. Of course living on the west coast with its hard coast lines and winter storms I am a tad concerned when friends and family go to sea. My heart is with the families of the lost. The government should have made more of an effort to get the bodies back.

It is the absolute arrogance of the slimers which will end their days in power.