Pope Benny and the Face of Evil 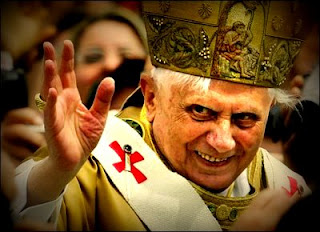 Glory Hallelujah. I see that Pope Benny has decided to take early retirement.

"After having repeatedly examined my conscience before God, I have come to the certainty that my strengths, due to an advanced age, are no longer suited to an adequate exercise of the Petrine ministry," the Pope said.

Leaving us to wonder whether it was his health, his conscience, or something the butler said. 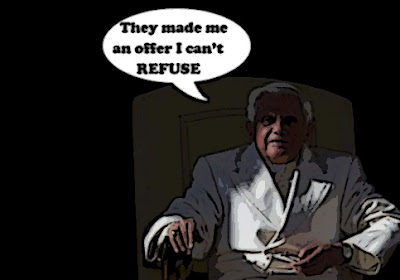 Because in the murky world of the Vatican mob anything is possible eh?

And I can't decide whether his latest tweet is a spiritual message or a confession...

But whatever....all I know is that I couldn't be more delighted to see that hideous old man shuffle off the world stage. And so are all my Catholic friends, including the one I live with, and love the most.

For whether they are male or female, or straight or gay, they all agree that Benny was a beast, and that decent Catholics deserve better.

And although I am an atheist, I agree with them. For in my humble but far more decent Book of Life, Joseph Aloisius Ratzinger a.k.a Benedict XVI,  will always be the very face of evil religion... 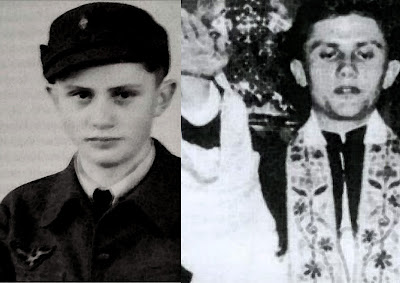 He was a member of the Hitler Youth, which should have disqualified him from ever being Pope. For whatever he says about that time, he was certainly no Lichtenberg.

When he was named Chief Inquisitor he carried on in the tradition of Der Fuhrer Torquemada. Waging war on those who didn't share his reactionary theological views, and covering up some of the most horrible cases of mass child abuse the world has ever seen.

When he became Pope he continued down that path, in his Prada shoes, and his Gucci glasses. His misogyny was palpable. He tried to drag women back to the 14th Century, and encouraged governments to deny them abortions even if it killed them.

And his assault on the lives of gay people was so unbalanced, so obsessive, and so virulent it exceeded the bounds of human decency and bordered on incitement to genocide.

At the end of the year, in his message for World Day of Peace 2013, he said same-sex marriage is unnatural and poses a threat to “justice and peace”. Days before he was pictured giving a blessing to Rebecca Kadaga, the Speaker of the Ugandan Parliament, who has promised to pass the country’s notorious Anti-Homosexuality Bill.

For when you describe gay marriage as a greater threat to the planet than climate change, what else do you call it? It's crazy, it's evil, and it's definitely not what Jesus would have said.

"He has been a faithful steward, and will be missed," Harper said in statment, adding that Benedict "will always have a special place in the hearts of Canadians."

For as I pointed out last night, he also supports the Lord's work in Uganda, he's also a misogynist and an anti-gay bigot.

And judging by that statement he's also CRAZY.

So him and Palpatine have a lot in common... 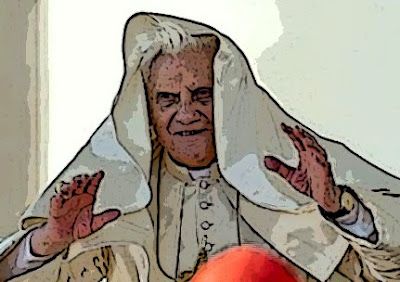 Oh well. I have to admit I'm going to miss one thing about old Pope Benny.

His incredible capacity to inspire me.

To find new ways to represent that ghastly self loathing closet queen.... 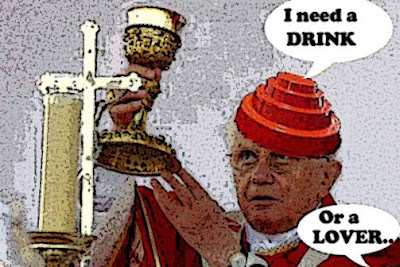 And although there were so many.

This one is my absolute FAVE... 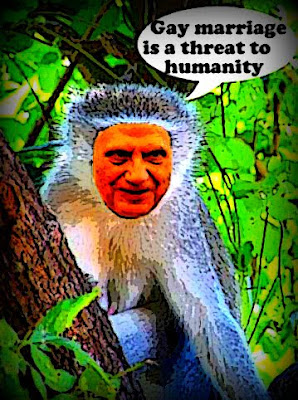 I call it my Mona Ratzo eh?

And it explains why tonight me and some of my friends were marking his imminent departure by doing a conga line through the living room.

And cranking this one to the MAX...

For if he thought he could  break our spirit he FAILED.

Stephen Harper can claim that Ratzinger "will always have a special place in the hearts of Canadians."

But not in mine, or in the hearts of all his other victims.

May the Good Godzilla have mercy on all decent Catholics.

For they deserve better...

How dare harper insinuate that this POS has a place in the hearts of Canadians. Ratz was the head of the catholic church, and meant absolutely zilch to people who did not prescribe to his particular brand of ancient superstition. He will NOT be missed by millions of non-catholics and the best send off I can think of is good riddance. Whatever time he has left ought to be in jail for his role in destroying the lives of millions of people through his cover up of child abuse to interference in family planning for those living in poverty.

Or, as with most high-profile quitters (Carl Rove, etc), he's leaving to 'spend more time with his family?' :-)

Wendy, you mean with his very handsome and much younger "secretary", Gorgeous Georg?

Simon, that Amy Winehouse clip made me so sad about her early demise.

Though there are sure quite a few sexy men in the clip...

I've pretty much given up hope that the Vatican will ever get with the times. I do think the Papacy has a role to play in influencing certain areas of public life. You need look no further than JPII for glimmers of hope. Goodness knows the man was far from perfect but he did have his moments. I think there are many worthy humanitarian efforts the next Pope could have a positive influence on. It would be nice if they stuck to that rather than the endless moralizing. Having said that though, they really do need to get with the time else they run the risk of becoming even more irrelevant in the lives of many (if that indeed that's possible).

hi bcwaterboy...yes Harper did go overboard didn't he? And how dare he speak in our name? As I said in my post a former Nazi should never have been allowed to become Pope. It was an obscene decision and it has led to this anti-gay pogrom. For you can't teach an old Nazi new tricks. But at least he has gone, and good riddance indeed...

hi Wendy...you mean THE family, like the Corleone's, or the Hitler Youth Reunion? I wouldn't be surprised. However if he disappears into the jungles of Paraguay we'll know the police are after him...;)

hi lagatta... well I was going to include a photoshopped picture of Gorgeous Georg sitting next to his holiness holding out a very long mike. And Benny is saying "is that a mike or are you just glad to see me?" But then I thought not. I'm a romantic and it's almost Valentine's Day... :)

hi Way Way Up...I know at least three good Catholic priests, who help the poor and the sick and are wonderfully human, who I would be proud to nominate for Pope. I'd even nominate some of the Christian Brothers who boxed my ears when I was a boy, even though I was a Protestant. For they were good men too. And any one of them would do a great job and take the church in a more human and dare I say Christian direction.. But unfortunately Benny has stacked the deck by appointing the most reactionary homophobic Cardinals in every country so they will almost certainly choose somebody like them. It's too bad, as I said decent Catholics deserve better...

My remark about Bennie leaving to spend more time with his family (how many children might there be?) was meant to be facetious. Then again, as in Corleone would not surprise me either.

Have to agree with you on the idea that an investigation into Bennie, if not underway already, is a good possibility.

hi Wendy...I know it was. But you were right. I just read that Benny will be moving into a place on the Vatican grounds along with the man they call Gorgeous Georg, who some hace called his boyfriend. Love wins out at last.... ;)