The Snowmageddon and the Con Apocalypse 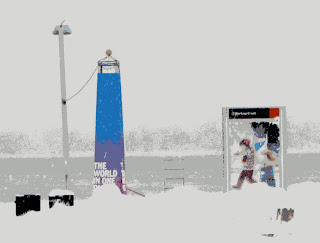 Golly. I don't know how I did it. Survived the Great Toronto Snowmageddon.

Because it was brutal eh?

Not the storm itself, which was only a Snowmageddon if you don't live in Alberta, or Saskatchewan, or Manitoba, or Quebec, or the Atlantic provinces, or anywhere in northern Canada.

No, the brutal part was watching Peter Mansbridge  making it sound like the world was ending...

And the REALLY scary part was the sight of Jimbo Flaherty crawling out of his snow hole after it was all over.

Claiming he couldn't see his shadow... 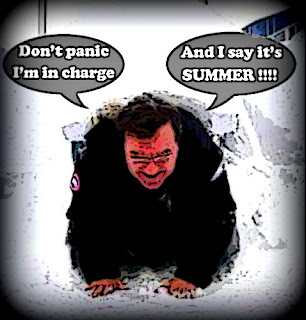 Only to be proved horribly wrong. Again.

And I do mean horribly wrong.

Ominously, labour force participation is still falling — five straight years now of disengagement by Canadians from the world of work. Overall participation fell to 66.6% (rounded UP, and seasonally adjusted). Compared to peak pre-recession participation, participation has declined almost 2 full points. That decline in participation corresponds to the disappearance of 355,000 Canadian workers — and that discouraged army gets bigger every month.

Because nobody is going to dig us out of that one eh?

Except maybe a REVOLUTION.

For seven years Stephen Harper and Jimbo Flaherty managed to fool a lot of Canadians into thinking that they were good "money managers" while doing everything wrong.

Putting all our eggs into one basket, like Alberta.

Failing to create any new green jobs for the 21st Century. Cutting government jobs at a time when the private sector wasn't creating any. Presiding over record levels of household debt, and a world class housing bubble.

Now the buzzards are coming home to roost, the bubble is about to burst, and we're ALL going to pay for it.

And the good news? Forget about the Snowmageddon, it's the beginning of the Con Apocalypse.

After this nobody except their dumb base will believe that the Cons are good money managers. Defeating them in the next election is about to become a whole lot easier.

The sun is rising in Canada again.

Don't you just LOVE it? 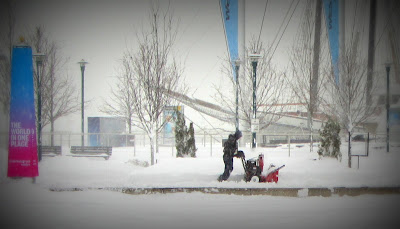 If the economy cracks, do you think harper will finally stop licking Washington's boots and pull out of the F-35 clusterfuck?

hi thwap...I think if the economy cracks how Harper feels about Washington will depend on how Washington feels about the Keystone pipeline. For if they say no, and the economy tanks, he can always blame them. Not that he can do anything about it, because the Chinese are only bit players so far, it's the Americans who own us. As for the F-35 fiasco who knows. We might buy fewer of them, or as I strongly suspect, they will be rendered obsolete by advances in fighter technology. The robots are coming and we can't even see them...

Actually, I believe banana-belt Saint Catharines, of the peaches and wine, got the record snowfall this time in Canada. And some parts of the Northeastern US have fared worse, no, not northern Maine: Boston and that area.

I hate winter. Refuse to be forced to like it out of any kind of patriotic imperative, whether Québécois or Canadian.

But it is nonsense news.

We should be rioting in the streets over Harper and his gang of thieves and liars. Harper is dismantling Canada around our ears and to what benefit? Hastening the rapture? We all have to stand up. The elites have never protected ordinary folk. If only mainstream media would reveal the truth about how the Harper regime is destroying Canada to boost profits for the one percent, but the Harperites would never pull this off without mainstream media complicity. This media is owned by the 1% and they seldom take issue with any efforts that will enhance the system that helps the rich to acquire even more riches. Mainstream media deliberately created ignorance is one of the greatest problems we face. The irony of a supposed conservative government in bed with the capitalistic communist government of China is as thick as bitumen. We must unite to reverse Canada's slide into kleptocracy and the loss of our democratic values.