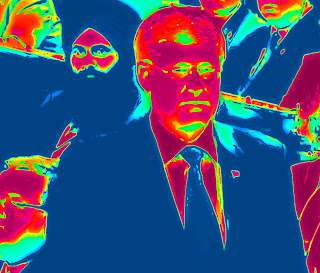 Gosh. When I watched Question Period today I wasn't sure whether I should call the fire department or the bomb disposal team.

For as you can see from this thermal image, Great Angry Leader was practically glowing in the dark, and threatening to blow up.

And of course it was the Senate, his horrible nightmare that just keeps getting scarier and scarier.

For first there was Duffy, then there was Brazeau. And since today was Wednesday it had to be Wallin.

Prime Minister Stephen Harper stepped into the Senate spending controversy Wednesday, defending Senator Pamela Wallin against mounting questions about her travel expenses, even though an outside audit of her claims is ongoing.

The prime minister told the Commons that he had personally reviewed Wallin’s travel claims and that they appeared in line with other politicians.

Can you believe that? He's not just an "economist" he's an AUDITOR !!!

Of the Stephen Harper Club... 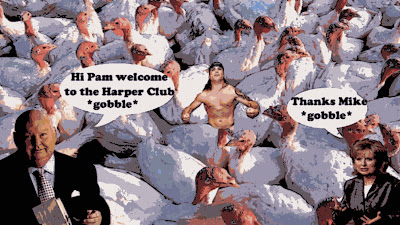 Which only makes sense eh? Since he DID appoint them. They are HIS turkeys.

And as Aaron Wherry points out, even as he glowed in the dark, he was probably  looking back fondly at those halcyon days, nineteen years ago, when he said Senators should be ELECTED.

At the time, Stephen Harper’s plea was apparently simple. “Senate election, which I have spoken on specifically, is a partial solution that does not even require opening the Constitution in order to proceed,” he said. “It only requires a basic sense of fairness.”

So he could blame others for this fiasco, instead of having to suck up the blame himself. Like a thick turdy milkshake, through a very narrow straw.

Because of course that's why Great Harper Club Leader is glowing trembling in the dark. For years he has been able to keep most of the muck excreted by his sordid government from sticking to him. Like a real Teflon Tyrant.

But judging from the look on his face today, he must surely know that this one is going to stick to him like stink on shit, as they say in the West Indies. All the way to the next election.

Because people WILL blame him, and it's going to be a long audit.

A three-person Senate committee investigating the housing-allowance claims of senators faces a task so daunting that experts suggest it’s time to call in Canada’s auditor-general. A Postmedia News review of Senate expense claims shows that only seven of Canada’s 104 senators (one seat is currently empty) have not claimed any sort of housing allowance since 2011.

And who knows what Duffy might say next, in his desperate quest to prove he lives in PEI... 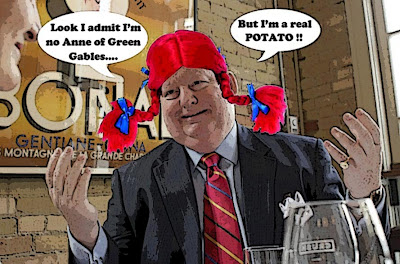 Or what Brazeau might do next. Like claim he's such a good Con he has Stephen Harper's heroic image tattooed on his left right buttock.

And threaten to show us eh?

Or show the judge.

And of course, the Flying Wallenda Wallin  has her own constitutional problems.

And all I can say is that this yummy scandal has the potential to tar Harper like he's NEVER been tarred before. And cost him the Senate, or the next election, or BOTH.

Because after this every time he says "accountability" or "law and order" people will burst out laughing.

But of course in the meantime, we have to worry about who he's going to appoint next... 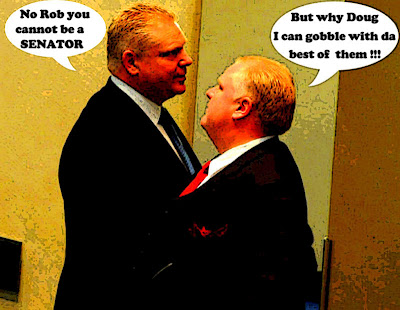 Because the word is getting out, ANYBODY can be a Con Senator. And it PAYS !!!!!

But at least there's one small consolation in that regard.

The only promise Stephen Harper has ever kept is his promise not to work on Sunday. So he can get his instructions from his Lord.

So we might be stuck with Duffy and Brazeau, for a while. And if it's Wednesday it must be Wallin.

But at least we know that if it's never on a Sunday.


Although come to think of it that did look a LOT like the Senate, and Miss Piggy probably would be an improvement. Or couldn't do worse. *Oink* *Oink*

Stephen Harper set out to make a name for himself by reforming the Senate. Only to destroy it. And then have it destroy him.

Couldn't happen to a worse institution.

Couldn't happen to a nastier guy...

stevie slime wears all of it! he appointed 3 out of the 4 senators under "a cloud". It happened on his watch. if he was as committed to senate reform as he said he was, he would have started with senators lack of work and their spending habits a long time ago, but no, he used the senate for his own political purposes and it will help bring him down.

While Canada continues to run a huge deficiet, people are loosing their jobs, social programs are being cut we have the senate spending one themselves like there is no tomorrow. Fire all of the bums caught with their hands in the cookie jar. Might set a standard or something like it. lOh, and make them pay back every cent.

I don't know how you can stomach watching QP. Seeing just exerpts of the Con Caucus cheering Harper for telling Rae to, "Put up or shut up", regarding allegations of rape of aboriginal women by the RCMP in Northern BC, is way too much for me to take.

Even worse, when I see Kelly Leitch shilling for these monsters, it drives me crazy.

make them pay back every cent.

I agree eaf, and at dept store credit card interest rates that the job creators charge the middle class to have nice things....29.99%

harper has made no honest effort to reform the Senate. All he's done is appoint the dregs of society to be his trained seals.

Outrageous and disgusting, is all I can say about $13,000 a month in "travel" expenses. Wallin should go to jail for fraud. But chances are, with Great Fiscal Responsibility Leader Harper, she won't even be forced to pay it back.

If this is what the CONS had in mind when they advocated for Senate reform prior to their election(?) than good grief! What a sad mockery of democracy this has become. Frankly I'd vote for just about any Party at this point that would abolish this shameful mess. Christ, I'd even vote for my cat if she could pull it off!

hi Kev...I hadn't thought of that, but you're right. Although I hope that Duffy and Brazeau can stick to him like a tattoo on BOTH buttocks.... :)

hi e.a.f....I can only conclude, like others have, that the Cons have run out of steam and ideas. For everything they do these days is so contrived, so cheap, and so obviously political. And as for the Senate, nothing illustrates so well the hypocrisy and the corruption of the Harper Cons. It's almost unbelievable. He talked about reforming the Senate and then packed it full of hacks. He may be hoping that will cause Canadians to scrap it in favour of an elected body, by I think it will only lead to demands that the Senate be abolished. Period...

hi anonymous...I watch Question Period when I can out of a sense of duty, and so others don't have to. I also frequently read the transcripts and make notes, so that one day I can put it all together, and leave it as a record of a dark age in Canadian history. And sometimes I see things that are never reported by the MSM. Like when Justin Trudeau stood up the other day in QP, and Cons like James Moore mocked him by pretending to comb his hair, while Stephen Harper sitting close to him, cackled like a hyena. It was a disgusting spectacle. Hey, when I think about it I should be paid for that !!!!! ;)

hi bcwaterboy... I agree with you, they should pay back every cent, and the trough should be removed. For it's not like any of those people are poor. I note that Wallin dropped into Toronto recently and bought not one but TWO condos, for almost a million dollars each. It's a hog fest and the pig sty should be abolished...

hi thwap...as I've said the whole thing makes no sense. Why would he try to elevate the institution and pack it with such hacks. Unless Great Machiavelli Leader figures if he debases the existing institution enough he can replace it with an elected Senate. But if he thinks that can work he has clearly lost his judgment, and/or his marbles...

hi wazz...I just hope that Wallin and all the others are properly audited, because I'm afraid I can't trust the Senate to correct this problem, when so many are causing it. Also, Harper's plans to give the Senate more power by having it elected makes no sense, for it would inevitable clog up the proceedings, and pit one body against the other. The man is insane and should be removed immediately...

hi Way Way Up....OK I vote for your cat too. That should make it more representative than all the Senators put together. ;)
Seriously though, what I can't believe is how much scandal and controversy the Senate is causing, when there are so many other far more important things our elected representatives should be concentrating on. Let's face it, whatever party they support, surely nobody can disagree that what is going on is absolutely crazy. Summer can't get here soon enough...