The Cons and the Angry Sea 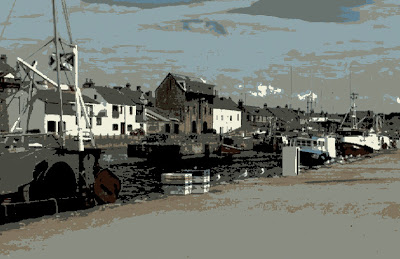 As I've mentioned before, when I was a boy I lived by the sea.

In a place where men went out to fish in small boats.

Sometimes they would be caught in a sudden storm. Or run into some other kind of trouble.

And I'll always remember how thrilling it was to hear the thumping sound of a rescue helicopter from a nearby base heading out to help them.

So you can imagine how I feel about this story.

Residents of a tight-knit southwestern Nova Scotia community where five young fishermen were lost at sea are grieving today as it comes to grip with the news that the search has ended because there is little hope for the men’s survival.

So sad and so angry.

The father of one of the fishermen believed to have perished after their boat overturned off the coast of Nova Scotia in a storm is asking rescue teams not to give up their search for the five missing men.

George Hopkins, father of Joel Hopkins, said the Canadian Coast Guard has tracked the overturned ship, the Miss Ally, and he would like the 13.5-metre boat searched before it sinks to the bottom of the Atlantic Ocean.

Because I can't help feeling that we give up too easily. I hate the fact that the only picture of this lonely life boat was taken by the U.S. Coast Guard.... 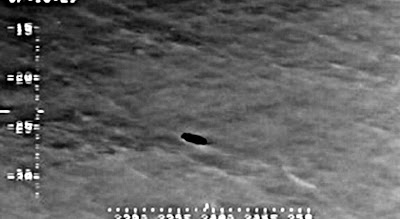 And to me this story both symbolizes the deplorable state of our rescue services, and the lack of respect the Harper government has for the coastal communities of this country.

They've been closing search and rescue stations in Newfoundland and British Columbia.

The federal government has officially closed a Vancouver coast guard base that's considered to be the busiest in Canada. Fisheries and Oceans Canada announced Tuesday in a notice to mariners that the Kitsilano Canadian Coast Guard Station will no longer offer search-and-rescue services.

They've been cutting jobs and reducing services in other provinces, and callously dismissing the concerns of those who live there. Those who know the sea better than anyone, and must live with its sometimes merciless anger... 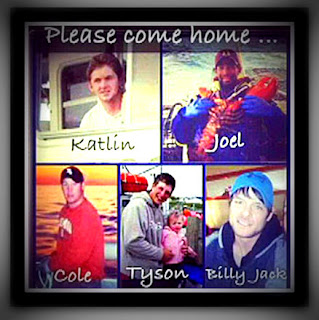 And my position is quite simple eh? I'm proud to live in such a beautiful and rugged country. I'm proud that we Canadians can take just about anything Mother Nature throws at us.

But when any of us gets into trouble I expect our government to have the best equipment, the best planes, boats, and helicopters available at all times to come to our rescue.

And that any and every search will continue until ALL hope is lost.

For I'll never forget how they couldn't get a chopper into the air to save a 14-year-old Labrador boy. 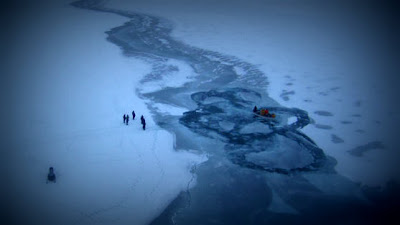 Burton Winters was last seen leaving his grandmother's home in the Inuit community of Makkovik on a Sunday afternoon almost eight weeks ago. He was reported missing that evening. The next morning, DND was asked to send a helicopter to help local searchers. But the military didn't dispatch a chopper for more than 36 hours and, by then, it was too late.

But somehow they could find a chopper to take Peter MacKay fishing.

And what more can you say eh?

Except may the angry sea hang its head for what it did to the young fishermen of Woods Harbour. And all those who loved them.

May an angry sea of public opinion cast the Harper Cons on the rocks of our contempt.

And drown them in disgrace...

I feel as you do, terribly sad about those young men - and the Inuit boy - and furious at the Cons who are so callous to people who actually do live in small towns, for all their cheap talk about small-town values.

And look at how they are treating fisherfolk and other seasonal workers. Looks like they are scuttling the fishery and want all the fish processed on Chinese vessels.

Those poor boys lost at sea. I am so sorry for their family's. This is terribly sad, for all decent Canadians, who value human lives. Right, they couldn't get a chopper, to search for the lost Burton Winters, but could pick-up MacKay with a military chopper. Fishing trips are far more important, than young Burton's life could ever be.

It is very true. Harper is giving Canada to Communist China. China owns our resources and resource jobs. Harper envies, China's resource workers wages, of $800 per month. He envies China's Human Rights because, their people don't have any. Harper's Omnibull-S-Bill also gives Red China the right to sue any Canadians, getting in Red China's way. Chins sued in BC, to take the mining jobs. Canada looks to be, as an occupied country. We have no say, what goes on in the country, what-so-ever.

I watched a program regarding, the absolutely horrific working conditions for, F.N. Police on the Reserves. This was on Reserves in Ontario, I believe. Most of the detachment offices should be condemned. Some are actually heated with, 45 gallon barrel stoves. There was a fire, where two detainee's died. The Police Officer had terrible burns, trying to save the two held in the makeshift jail. Some holding cells only have, pails for prisoners human waste. Their housing situation, rivals Attawapiskat and their horrible housing. Many Police Officers work totally on their own, they have no back-up. Some have been stabbed, this is against every law, breaking every safety code in the book. Many Officers work 24/7, no-one to give them a day off, no-one to even answer the phones for them. Burnout is very common for those Police Officers. Those Officers feel they can't ask for housing. There is a family of eight people, living in a two bedroom house.

How true. Harper can spend millions on a, stupid Freedom of Religion crap. $1 billion on a, stupid fake lake. $50 million to buy a riding with gazebo's. $1 million to fly his armored vehicles around with him. $1,300 for Minister's luxury hotel suites. Outrageous salary's and gold plated pensions. We pay to buy, extra houses for Harper's Cons. Horrific Limo service bills. Harper's security bill, is obscene. We the tax payers have to pay because, Harper has him self hated in Canada and, every country he travels to. Harper's expenses accounts, are through the roof. Millions in lawsuits Harper costs us. That's only a drop in the rain barrel, Harper is costing us. Harper is the worst, most corrupt and foul P.M. in the recorded history of Canada. Harper started out with a, $13 billion surplus. Harper has this country in the worst debt, there has ever been in Canada.

Harper's behavior is so bizarre, I am wondering his sanity? They eventually wondered, Stalin, Hitler and Mussolini's sanity too. Goes with the dictatorship mentality.

No wonder the F.N. Police Officers, must work in condemned buildings, without running water and toilets. They live in quarters, where the ceilings have fallen in, because of leaking roofs. Those roofs are so rotten, they can't even repair them to keep the rain out.

hi lagatta...yes it is infuriating isn't it? I'd like to see Harper and his gang setting out to sea in a small boat. But I guess because there's no ocean in Alberta they don't care eh? The way the Cons have been treating people in the Atlantic provinces is outrageous, and you know what they have in mind for BC.
But look at this way...if we can get the Atlantic provinces, Quebec, a large part of Ontario, and BC to vote against the Cons, we'll be the ones hauling them flapping and gasping out of a net, and into the frying pan... :)

hi anonymous...yes it is very sad, and a huge blow to a small community to lose five young fishermen in one blow. I see that Peter MacKay has promised an investigation, and I'll be following that one closely....