Harperland and the Birth of the Maple Winter 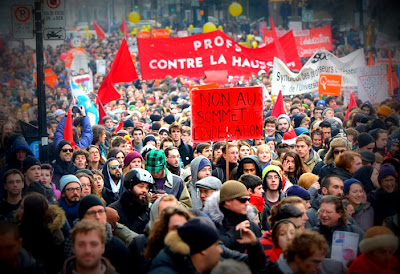 When I first saw the pictures I must admit my heart started beating faster.

For a moment I thought that Spring had arrived in Harperland.

But it wasn't the Maple Spring eh?

It was the Maple Winter.

Hours after Quebec Premier Pauline Marois declared that student unrest is “behind us,” thousands of protesters took to the streets of Montreal to denounce a planned three-per-cent tuition fee hike. At least 10 arrests were made Tuesday as some protesters hurled snowballs and bottles at riot police. 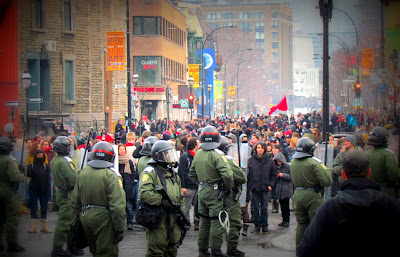 But there they were again, thousands of students marching through the streets of Montreal.

The police were there again.

And so was the Anarchopanda... 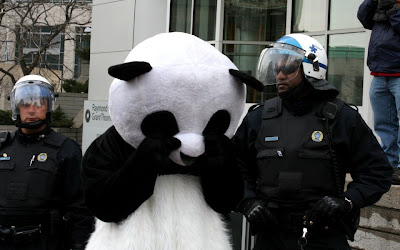 And although I can already hear the cranky old editorialists in the MSM screaming: "Why are those students causing trouble again? Why aren't they ever SATISFIED ??!!@#!!

Student leaders said they felt betrayed by Marois, who wrapped up a two-day summit on higher education by announcing a plan to increase tuition by $70 per year, or roughly $350 over the first five years.

Marois’s Parti Quebecois government had nixed the previous Liberal government’s efforts to raise the tuition fee by $1,625 over five years – a plan that sparked sometimes violent protests in Montreal, Quebec City and other parts of Quebec last year.

If I had been in Montreal today, I would have been marching with them. 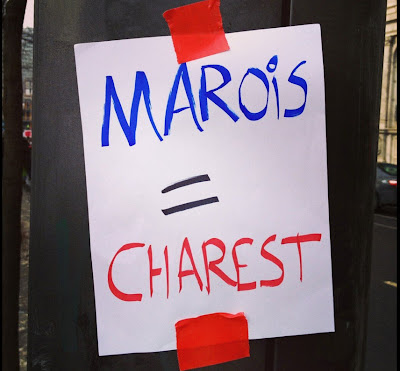 But standing up for lower education fees, or hopefully none at all, like it is in places like Scotland, is one of the things you do if you want to build a better world.

And if you don't put pressure on those in power, you don't get anywhere. Today we'll march against Marois.

Tomorrow we'll march against him... 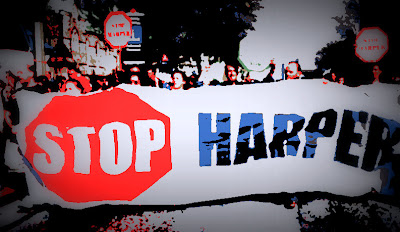 The Occupy movement, the Quebec students, the labour movement, Idle No More, it's all the same thing to me. It's about shaking things up, challenging the corrupt system head on, and refusing to surrender to the cynicism and the despair that afflicts so many progressives in these dark times.

Fighting the Con regime, fighting for the future. 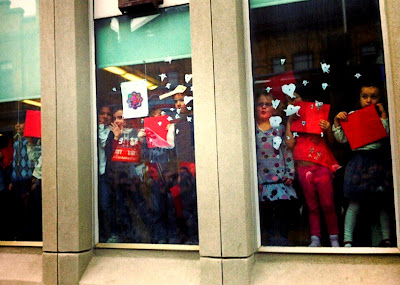 So they can remember one day that even in the grim darkness of Harperland, some refused to roll over, some couldn't be muzzled, some did RESIST.

Even as so many slept.

Oh yeah. Did I mention I'm a dreamer? I must be, because I still dream of seeing progressives UNITE to crush the Cons. Even though so many of my friends tell me that will never happen. And I know it must.

But if the Quebec student movement is a dream. Until Canada's Maple Spring arrives. Finally.

Don't wake me up eh? For I still wear the red square proudly.

And this dream is still so beautiful...

Drooling dullards will tell you that Marois has been forced by reality to cut spending and raise fees. There's no bottomless well of "1% wealth" for blinkered pinko governments to tax and pay for all the goodies that these dreaming-in-technicolour student radicals want.

Which is, of course, complete bullshit. "Plan Nord" is a multi-billion dollar gift to resource extractors. It's coming out how big a drain on the public purse corruption is.

1970s levels of spending on public education would be quite feasible.

Haha, Quebecers turing on Quebecers! Love it! Frankly I hope they destroy themselves.

hi thwap...I can't put all the blame on Marois, because she only has a minority government. But what I do fault her and all the others for, is a failure of the imagination. Every province in this country needs to re-orient its priorities to prepare us for the future. If we want prosperity and civilization education is the answer. If we don't think big we will be condemned to be a little people...

hi anonymous... uh oh did you forget to take your anger pills today? Or have you been drinking heavily? Again. I really don't know what to say, except honestly Con please read what you just wrote, while sitting in front of a mirror. Then look at your face, and repeat after me: I NEED HELP...

Thanks for that. Simon, there has been a tremendous amount of anti-Québécois and anti-francophone (including Acadians in Tracadie as well as Québécois) bigotry in the MSM recently. While I agree that the way the Office de la langue française targeted an Italian restaurant for pasta and polpette was ludicrous (all francophone media agreed on this too), a cursory read of the comments in the Gazette and even cbc.montreal show people not criticising a policy but foaming at the mouth with hatred of the very thought of Francophone culture in Québec.

Sorry, anonymous 7:26pm, we are NOT destroying ourselves; we are resisting the corporate agenda and creating a new culture.

@Anonymous : you say "Frankly I hope they destroy themselves"

You hate yourself, it's obvious. Happy people don't wish harm to others.

"Burn Quebec, Burn!"
Sounds like "Is Paris burning?" Look up who said that.

The Thwap, is that it's a minority government, who has to cater to the opposition to keep the government in place.

The other problem is the shortfall in the budget inherited by the liberal party (which as it would turn out, was to the tune of around what free post-secondary education would cost, though due to the nature of debt and interest had surpassed that figure by the time the AssNat session began). What you call drooling dullard, I call people actually paying attention. They had to compromise on their budget, and put in effect a short term plan to zero the decifit. Ballance the books and start from there.

Nobody is saying there isn't a metric crap ton to be collected from the super rich, nobody not in the CAQ and PLQ camps at any rate, did you completely miss that whole spat in December over them threatening to non-confidence the government over the proposed capital gain tax, and the PQ's two new tax brackets for the upper and elite classes?

Personally, knowing the state of Quebec's budget, I'm okay with indexation, especially given that the PLQ's modifications to loans and bursaries are being offered, it comes down to not only effective tuition being a fraction of what it was just a few months ago, but also having the option to use bursaries to pay off loans. After nearly a year of marching in the streets nightly, countless arrests, detentions and beatings at the hands of the SPVM and SQ, I'll be returning to class come September.

Most of us set out to stop the hike, we achieved that. Though I find it saddenning that we see many regurgitating CLASSE's line that they were utterly ignored at the summit, we hardly see a mention of the fact that they were not even at the summit. They decided to boycott it beforehand. It's little more than hubris. They were willing to make concessions at the negotiating table, but got cocky after toppling the government.

Another thing is that the current government has never promissed to eliminate tuition, they promised to eliminate the 80% hike. They were quite clear that they favoured indexation, but would hold a summit giving the invited groups a chance to convince them of other avenues. Hard to convince anyone of anything when you don't even show up.

Probably worse is that we keep citing the Scandinavian model, ignoring the important details involved that don't do our thing, in the name of accessible education. A huge chunk of the current student mody would not passthe admission requirements of the Scandinavian model. What we're actually citing is the French model, minus the elite tier (two tier higher education system, free for the masses, but comparable to the Ivy League in the elite tier).

But of course, there are other means to gather the funds necessary for this sort of endeavour, exploiting Quebec's vast shale reserves (and imagine the economic boon of having it all refined here), or of coure,the sovereignist option, which would allow Quebec to keep the ~$60 billion it sends Ottawa anually in taxes, but I digress.

hi lagatta...yes I've noticed the anti-Quebec bullshit Dumb language inspectors, and dumb rednecks are a horrible mix. There is something crabby and grubby about this country these days. It's really quite unpleasant. But I try to ignore it, try to stay above it, and dream of something nobler and better...

hi Oengus...don't bother trying to reason with that ghastly bigot, his head and his heart are too small to be moved. My view is, and always will be, that Canada without Quebec would be a very conservative place, and a far less interesting country...