The Real Crimes of Rob Ford 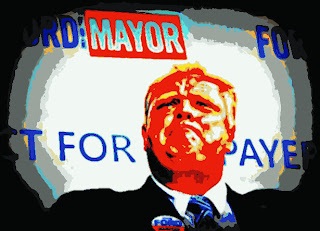 If you don't live in Toronto you probably know Rob Ford as the callous, vulgar, Con buffoon, who doesn't know what he is doing, and is always getting into trouble.

But because he has no effect on your life, you can laugh, or shake your head, or shrug your shoulders at this latest democratic outrage.

Among auditors Bruce Armstrong and Glen Davison’s findings: the mayor’s campaign overspent by $40,168, or 3% of the $1.3-million limit; it received $6,000 in donations made by 11 corporations, but listed them as coming from individuals..

It found the campaign attributed $19,500 to a “Bromell” fundraiser that never took place and that the money was actually raised at a Building Industry and Land Development Association event.

But the sad part is that a lot of people who live in Toronto feel the same way.

Normally, such dysfunction and distraction from a chief magistrate would elicit outrage or, after a second or third mistake, some force for censure or disapproval. Not here.

Even though the Con buffoon is KILLING their city.

Take the traffic situation for example. On the first day he came to power Ford declared that "the war on the car is over." He scrapped a vehicle registration fee that cost the city $60 million, and declared war on the bicycle.

Even though the city is choking in its own fumes... 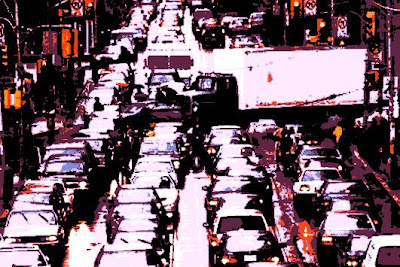 In the summer the air is sometimes yellow. Gridlock is the new normal. Commuting times are among the highest in North America. Buses and taxis and delivery trucks just crawl along, and ambulances can't get to where they need to go in time. So people are literally DYING.

As are the homeless. But Ford and his right-wing gang just cut 100 shelter beds. Even though the city has a surplus.

Even though during a recent cold spell some of the country's poorest and most vulnerable people had to sleep in the lobbies of city buildings... 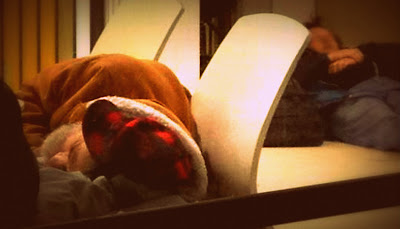 Toronto’s homeless deaths last year were the highest since 2007 and activists warn the number is likely to climb even higher in 2013. Some 34 deaths of people without homes were recorded in 2012, eight more than the previous year.

But Ford doesn't care about the homeless, because most of them live in the downtown area, and he's a millionaire who only cares about the suburbs. And that's just one of his real crimes.

And then there is the case of Far Enough Farm, the beautiful little hobby farm on the Toronto Islands that the city has been running well, for a pittance, for more than fifty years... 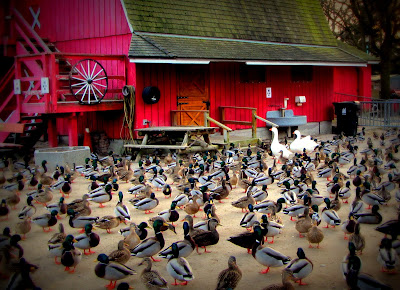 I've written about this gentle little oasis before, that I and others worked so hard to save.

But is now being handed over to the owners of a nearby amusement park.  Who I'm told don't really want it.

Leaving me to wonder what will happen to the animals who live there, like my friend Jake the donkey... 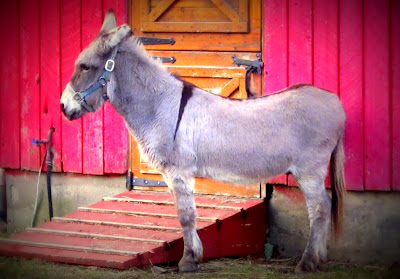 Seen here the other day waiting patiently, like only a donkey can, for the barn door to open so he can retire for the evening.

And who like many of the other animals here is old, and has known no other home.

Oh well. I'll make sure that Jake and the other humble animals are treated properly... 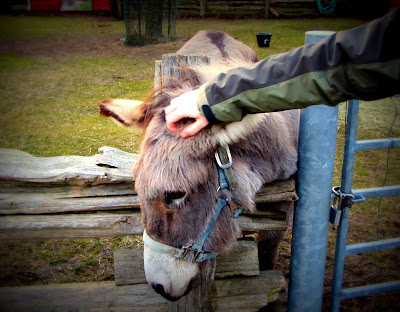 Because I care about him and them, just like I care about this city. Even though I'm a Montrealer. Because like all other cities it is a reflection of who we are, and what we are becoming.

And if I'm still here in 2014 you can be sure that I will offer my services to some progressive candidate for Mayor. One who can win.

And plaster posters like this one all over the city... 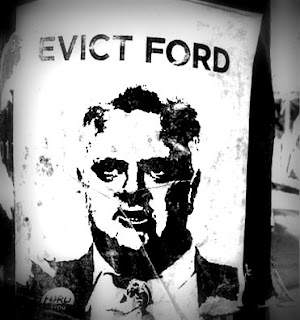 And I see how Ford has worn down so many Torontonians with his callous and brutish behaviour. And how so many Canadians have come to accept the unacceptable. Or have surrendered to despair.

Instead of wanting to fight the Cons even harder like I do eh?

I can't help thinking of that other Jake, the one some call the Dylan of Nottingham.

Damn. What happened to my country?

Get me out of this Trouble Town....

We need to get Olivia Chow to run for mayor. With the landslide electoral total she would accumulate, even the fucking fords wouldn't be able to manipulate that election out from under her.
"Six more years" MY ASS! There won't be anything left of Toronto if that happens. It'll start to look like Detroit or Chicago around here.
We need a Mayor who'll get rid of that nazi blair also. We've got more than a bumper crop of fascists in federal government without having to deal with them here, too.
Exile them all to Alberta and build a retaining wall around it just like "Escape From New York" or like the israelies are doing to Gaza. That ought to hold them. They can even build pipelines all through the province to their hearts' content.
Canada For Real People!
Oilberta for the con-nazis!
Peace out!

Whenever I think about the animals on the Far Enough Farm that the Ford gang are going to close, my heart aches. The whole concept of a farm so accessible to urban families is brilliant - why would anyone want to destroy it just to save a few nickles and dimes.

It also reminds me of the Harper Regime's closure of prison farms. Another low cost, brilliant program with so many benefits heaped onto a trash heap of vindictive cost cutting.

Hi from Red Deer. Holy fuck this is so embarasing, to all of YOU. You demand clean water, yet a hundred years ago when you died in droves slurping from creeks you had no one to bitch to. Now you demand that which you werent close to attaining. You hadnt even come up with the wheel before we got here, yet now we are supposed to believe all was paradise. If you had whined to your fellow natives who took your land you had previously occupied, you were scalped with no mercy. Get over it, get a job, and join the real world. Embarrasing.

hi anonymous...I am hoping that Olivia Chow will run for Mayor, because polls show she could beat Ford, and she's my MP. And if she does run I will definitely sign up to work on her campaign, something I've never done before. Because six more years of Ford is simply unthinkable, and Toronto deserves better...

hi Beijing...yes it is pathetic. The farm is free, it's a great place for poor families to take their children, and a small percentage of the ferry tickets to the Island in ONE weekend, would more than pay for it. The good news is it could have been worse. They owners of the small vintage amusement park next door were forced to include the farm as part of their application for a new lease, and I'm sure they'll do their best to keep it up, I just don't know if they can afford it. Ford is like a bull in a china shop, and his bestiality knows no limit...

hi anonymous...you obviously intended this as a comment on another post. But it doesn't really matter because it makes no sense anyway. If you are going to go back in history remember that if the native people hadn't helped the white people when they arrived, most of them wouldn't have survived the winter. White people can't lecture anyone, when it comes to brutality, and the native people were doing just fine until the white people arrived, stole their land and decimated them with European diseases.
But anyway, may I suggest that we forget the past, and concentrate on helping Canada's poorest people. It's the only decent thing to do...

And in this ring, ladies and gentlemen, the Fabulous Ford Brothers are here to entertain you. Rob the Elder will perform mind-numbing stunts of stupidity while Doug the Younger will breathe fire and bluster to cover them up and blame 'leftists.' There's never a dull moment when the Ford Family Circus is in town. Now held over for another tiresome year.