Stephen Harper and the Big Shock 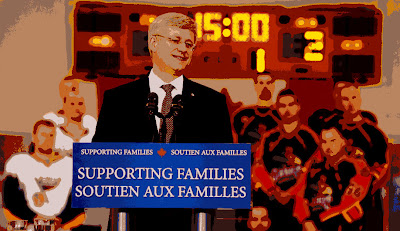 In the nightmarish world of Harperland it was just another bizarre photo-op. Stephen Harper in a hockey arena, standing in front of yet another group of human props. And behind yet another absurd sign.

Selling himself, and peddling defibrillators.

But I thought this one was particularly symbolic eh?

Because nobody needs a defibrillator more than Canada does, after what he has done to it.

Strangling our democracy, and muzzling scientists.

The Information Commissioner of Canada is being asked to investigate whether "federal government policy forcing scientists to jump through hoops before speaking with the media" breaches the Access to Information Act.

Invading the homes of the unemployed, smearing them as fraud artists, whipping up hatred against them and their families.

The union representing federal employees is asking the government to stop sending its workers for unannounced visits at the home of employment insurance recipients. The union says it fears for the safety of its employees, given the level of public anger over changes to the EI system that could affect seasonal workers.

Because he can't humiliate the poor enough, even as he blows Big Oil, and leads us all to economic disaster.

Or celebrates war, when most Canadians would rather celebrate the Charter of Rights

Or tries to neuter the Parliamentary Budget Officer.

Creating the PBO was a good move for Canadian democracy. But appointing a lapdog commissioner when Page’s term expires in March would be worse than having no PBO at all. It would create the illusion that there is a safeguard in place, when no such safeguard exists.

In a country more dead than alive.

Don’t expect Page to win this one. The government likes its dogs trained and muzzled. And in the nation’s capital — already suffering from a depleted and demoralized press gallery and an access-to-information system mired in bureaucratic intransigence — tranquil, neutered dogs are easy to find.

Does Canada need a defibrillator? Oh boy does it ever.

But the good news is so does Harper. Because that's what this photo-op extravaganza is all about.

His polls are sagging. Badly. 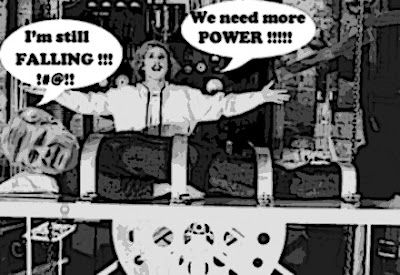 But somehow I don't think it's going to work this time.

Firstly, because it's all so familiar and so phony. He's become a parody of himself.

And secondly, because I watched his absurd hockey photo-op in a hospital waiting room. And even some of the sickest patients were roaring with laughter.

So I have a feeling that Great Hockey Leader is in for a Big Shock...in the next election. And you know how I feel about that eh?

Fire up the generator.

Crank up the POWER...