Stephen Harper and the Con Deniers 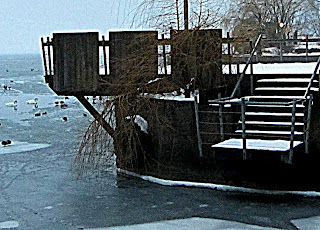 It is without a doubt the weirdest weather I have ever experienced. One moment the lake was frozen.

The next moment it wasn't.

Toronto and London hit record highs of 14 C on Wednesday morning while Windsor saw a 15 C high early in the day, shattering the Jan. 30 record of 9.5 C set in 1988.

But one thing remained the same. Once Lake Ontario almost touched the bottom of that snowy platform. Now it's down more than two feet, in just two years.

And the same thing is happening in the other Great Lakes.

Steadily dropping water levels in the Great Lakes threaten to leave the Canadian economy high and dry as shipping routes evaporate and water dependent industries shut down, costing billions of dollars, according to one expert.

Which makes me wonder what could happen if water levels keep falling? And how on earth could Norm Kelly, the person in charge of preparing Toronto for climate change, be a climate change denier?

That Kelly gets his information from people who conflate climate scientists with murderers might be amusing if he were a city accountant or garbage collector. But he is the chair of Toronto’s parks and environment committee. He’s in charge of our city’s environmental plans. And, when it comes to climate change, he’s the captain of our ship — decisions he and his committee makes will either protect us or make us vulnerable to what lies ahead.

When the predictions for the Toronto of 2040 are so ominous.

Scorching summers during which the maximum average temperatures are 44 degrees, compared to today’s 33 degrees. Instead of 20 days above 30 degrees, there will be around 66. Five times as many summer heat waves as we now have, and a humidex that rises to 56.5 degrees.

And it could be hotter than hell. Or Sydney, Australia.

But then the old Con Norm Kelly isn't the only climate change denier holding our fate in his hands.

So is Stephen Harper... 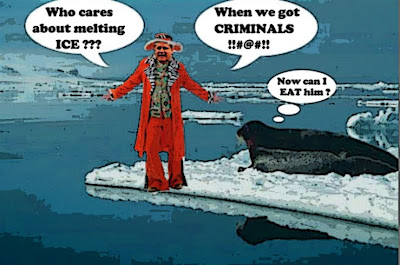 Who told his swooning Con caucus the other day that his priorities were pride, family, the economy, and of course CRIME FIGHTING !!!

You know these urgent priorities.

But somehow forgot to mention the threat of climate change, even as it closes in on us like a warm breeze in January. Even as the genteel Sierra Club calls for civil disobedience.

We are watching a global crisis unfold before our eyes, and to stand aside and let it happen — even though we know how to stop it — would be unconscionable... It couldn’t be simpler: Either we leave at least two-thirds of the known fossil fuel reserves in the ground, or we destroy our planet as we know it. That’s our choice, if you can call it that.

Because of course Great Tarry Leader is just a tool of Big Oil, who would put short term profits before the future of Canada and the planet, and let nothing stop him from selling us out to foreign interests.

Oh well. Think of it this way. Climate change wasn't a factor in the last election, but I'm pretty sure it will be a burning issue in the next one. 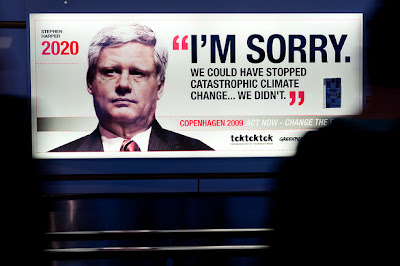 I'd rather imagine what he will look like when we defeat him in 2015.

Because I bet you he looks even worse eh?

Organize, unite, just do it.

Before he melts us all... 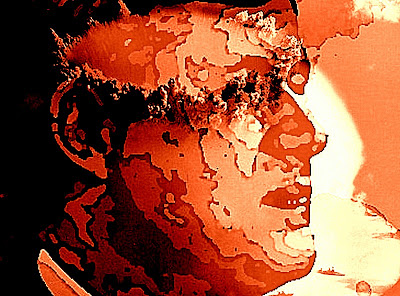 Love your blog, hate the colours. I can't read the orange or yellow against the grey background on my phone, where I usually try to catch up on your blog. Any chance of a change?

I think Harper knows the climate is warming up. His interest in mineral resources and oil in the north wouldn't make sense if he thought the north is as frozen as ever. But he doesn't want the little people to make a fuss or to put any money or planning into adapting to climate change.

hi jacqui...I remember when I first started blogging somebody said my blog looked like a halloween presentation, and I was devastated for day. But your criticism is a good one. It's funny, I write my blog on a desktop or a pad, but although I read other blogs on my mobile, I don't read mine.
However, now I have I see what you mean. I changed the colours on this post and will adjust them on the weekend...

hi fightfordemocracy...I'm sure he does, although if you review his sayings over the years, that wasn't always his position. He used to claim that CO2 wasn't a problem, but now his version of denial is that the Cons are cleaning up their act, when in fact they are not.
But as I said in my post, one he could fool people now he cannot...

There are climate disasters all around the globe. Australia, Africa, America and China. In China you can't tell day from night. The pollution index so high, people can't even go outside. 40% of China's farmland and water, is polluted. I am very sorry for the Chinese people, having to contend with the pollution, and their asinine government. Harper, Premier Redford, Enbridge and Communist China and big oil, are completely brain dead. Perhaps they can drink oil and eat their money. However, humans can't.

There is contamination found in Alberta's lakes, from the dirty tar pits. The huge Athabasca watershed is polluted. There are deformed fish, in Athabasca Lake. The fools are destroying the last Boreal Forests in Canada. 500 birds died, from landing in that filthy sludge. The courts found the birds guilty of, being stupid enough to land in it.

They have found acid in the ocean, right up to the shores of BC. No matter, they are still stupid enough to force the Enbridge pipeline into BC. Those behemoth tankers from China, will most certainly have a tanker spill, in one of the most treacherous seas in the world. Same with Kinder Morgan. They have announced forcing their pipeline into Burnaby, late 2013. The number of tankers are already bad enough. However, greed forces the pollution, no matter the price we will pay. Vancouver is a favorite tourist destination. An oil spill of any kind, will kill Vancouver.

Most Canadians say, Harper has no right to be P.M. Canadians believe Harper cheated to win the election with, his robo-call swindle. We have to unite and get rid of Harper. Either that or, leave Harper, Ottawa and Alberta as their own country. They can call their country, oil patch. The rest of the provinces can unite and, be our own Canada. We do not have to participate in, China's takeover. We had better think hard on this. The dirty tar pits, can and will destroy this entire planet.

Thank you! I've struggled with your blog for quite some time, and I really didn't want to drop you from my blogroll, you're too good of a read. I often read them in bed on my phone first thing in the morning before my feet hit the floor.

climate change is happening. it might be caused by people and their activities or it could be the climate changing all on its own as it has in the past. we had ice ages, we had areas which were lush and then became deserts. Regardless of the cause we need to take measures to protect our air quality by reducing pollution. We need to ensure our oceans remain as clean as possible because as the climate changes the animals which live there will be affected. We need to cut back on the out of control fishing so there is something left once ocean temps continue to change. most of all we need to ensure all fresh water supplies remain clean and not be used for such silly projects as fracking or bitamen extraction. As the climate changes the world supply of fresh water maybe effected. Lets not waste it now and pollute our ground water and aquafiers.

Drilling in the oceans and artic is plan dumb. We don't need more problems there as we try to deal wih climate change. Not all the money in the world is going to help if you don't have clean water and air and a place to grow food

This is because the Con climate deniers think the great floating ghost in the clouds has this all pre arranged, and so science doesn't matter. Only their mindless superstition does. Even when the temperatures rise further and the water is lapping up their shins, they won't acknowledge reality.

hi Jacqui...your welcome. When I've got some time I'll play around with the template to see if I can make it easier to read. I do miss my halloween colours though... ;)

hi anonymous...well as you can see from the reports coming out of Alberta, Harper's decision to put all our eggs in the oil basket is coming back to haunt him. And that will be his epitaph. He was a blind too of Big Oil, who didn't see it coming, and didn't know what he was doing. Which will be good enough for me... ;)

hi e.a.f...unfortunately fracking is now a runaway train. I saw a satellite photo of the United States at night the other day. You could see the lights of the big cities shining bright. And there in the U.S. midwest what looked like a large city was actually a fracking field. The oceans are also being depleted, and rising temperatures there could unleash even more greenhouse gases, or toxic ones like sulphur dioxide that has been blamed for at least one mass extinction. But until we realize that our endless growth economic system is a threat to our survival nothing will change...

hi Wazz...exactly, this is what happens when those absurd Cons put faith before science. Harper should have been forced to publicly apologize for all the ridiculous comments he once made about climate change. Including the one where he denied that too much carbon dioxide wasn't a problem. But then they never do. I saw a column in the Post the other where a notorious climate change denier was now arguing that even if it does happen, it would be good for us. It's insanity I tell you, and Lord Harper should be removed from power as soon as possible, and dressed in a fancy strait jacket... :)