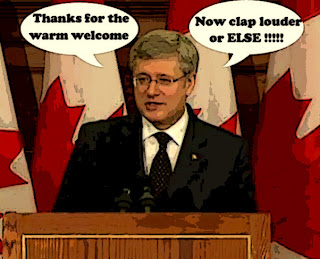 OMG. I knew it wouldn't last. Just the other day he was tweeting his horn, playing with his chinchilla, pretending to be Mr Nice Guy Leader.

Today he was back to his usual self, Mr Nasty Crazy Leader, and playing with the Con caucus.

The great man thus entered the room to a standing ovation, the chanting of his surname and rhythmic clapping. Apparently we are to assume the government caucus reacts this way whenever the Prime Minister arrives to speak to them.

Soaking up the sweaty adulation of his hapless stooges, like a Third World dictator. Posing for the media, puffing out his flabby tits, and declaring that what Canadians need is a new Great War on Crime.

“This spring,” Mr. Harper suggested, “we must continue to be focussed—and we will be, ever more tightly—on four priorities that Canadians care most about: their families; the safety of our streets and communities; their pride in being a citizen of this country; and of course their personal financial security.”

Can you believe that? Not a mention of the aboriginal struggle for justice, just another war on crime. And only two weeks after his Public Safety Minister, the Con zombie Vic Toews, declared that we don't need as many police officers, because the crime rate is going down.

"Spending on policing has increased steadily -- reaching more than $12 billion annually in 2010. At the same time, over the last decade, the volume and severity of reported crime have both been on the decline. This has added fuel to the debate among Canadians, who rightfully want to know where and how their tax dollars are being spent."

Lordy. What is it about Stephen Harper that makes him want to punish others so much? What depraved pleasure does he derive from scaring seniors into thinking that crime is out of control?

Why does he want to jail even more young Canadians? 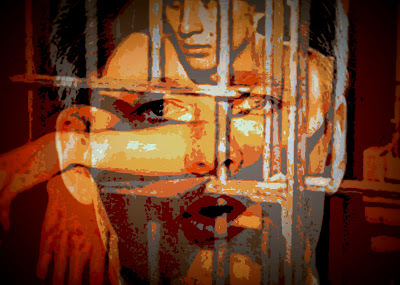 Instead of helping the old live happier easier lives, and finding jobs for the young.

The rise in youth unemployment in Canada during the recent recession will cost Canadian youth $23.1 billion in lost wages over the next 18 years, according to a new report by TD Economics.

This stubbornly high unemployment rate will have a big impact on both young Canadians' current wages, as well as their wages in the future.

Who will inherit a bleak low-wage future, along with a scorched planet.

Why would he declare war on them, instead of declaring war on poverty? Why is he dragging us back to the past, to 1914 or 1812, when we want a FUTURE?

Why does the Con caucus lick Great Ugly Leader's boots so easily?

Canadians want to be prosperous, they want to be safe, they want to be strong. That’s our focus. That’s why we serve,” Mr. Harper explained. “Let’s get back to work.” More applause and then someone started a round of O Canada. The assembled reporters were then kindly asked to leave.

And of course, why do I ask myself all these questions when I know the answer?

We're in the hands of a demagogic maniac, who will say or do ANYTHING to cling to power. 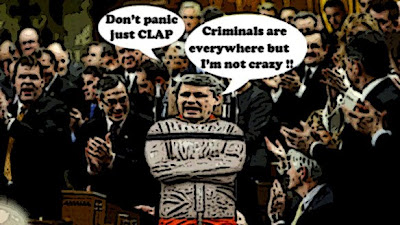 Nobody in his stooge caucus dares to question his madness or his evil policies.

Because they are too cowardly or too corrupted.

And NOBODY will be safe until he is defeated...

During one of Hitlers speeches? No-one wanted to be the first one, to stop clapping their hands for him. They clapped for fifteen minutes before, Hitler gave the signal to stop.

Goebbels was Hitler's propaganda machine. Seems, Sun News will be Harper's. Many of the media, are controlled by Harper.

Harper is the scum of the earth. Harper cares about Harper, and to hell with the Canadian people. China's minimum wage is, $236 per month. That's why Harper is permitting all company's to hire that cheap labor. Harper's insane Omnibull Bill, permits China to sue any Canadians blocking Red China. China sued in BC, to take the mining jobs.

Hitler wasn't too tightly wrapped. Neither is Harper. Harper's so called "Conservative" Ministers, are terrified of Harper. No-one in their right mind could possibly support, a monster such as Harper. Decent people don't behave as, Harper and his Ministers do.

He's run out of ideas and has to flog anyone he can find to make us pay attention to him. He is frankly very boring.

hi anonymous...well I don't compare Harper to Hitler, he is just a little right-wing ideologue grinding away for his Big Oil masters, like an organ grinder and his monkey.
But he is dangerous, for he is leading us to economic and ecological disaster, and sadly his intelligence cannot match his delusions of grandeur...

hi Julie...yes he is boring. That's exactly what I thought when I read his Twitter extravaganza, or watch his propaganda machine revving up again. But of course he is only targeting a sector of the population, the ones who are easily impressed. And the whole thing is staged so they don't show him turning the air blue with cuss words, as those who have worked with him say he does.
Still, what it does demonstrate I think is that the Cons are now starting to prepare for the next election, and in my opinion one that could come sooner than 2015...