Why Rob Ford is a Useful Buffoon 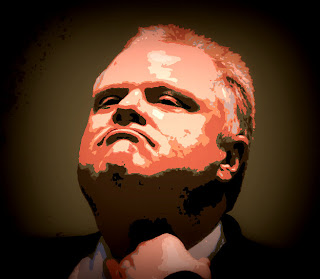 He was so sure he was going to lose, they had to hire a squeegee kid to mop the sweat off his ample brow.

And when he found out he had got off on a technicality, he was so relieved he sounded like the new and improved Rob Ford.

He stood at the podium, grey faced. With a choking voice, he read from a script. “This has been a very, very humbling experience,” Ford said.

For about ten seconds.

Before declaring that two years more of his moronic majesty wasn't enough, he now wants SIX !!!!

“The job is not finished yet, and I plan to spend the next six years on getting the job done,” Ford said.

Which despite the fact he looked like he was about to have a heart attack, was one of the funniest things I'd ever seen, until I read this column from the uber right-wing columnist Terence "Corky" Corcoran.

Many have said — and continue to say — that Rob Ford may have learned a lesson from these cases. They had hoped — and still entertain the idea as a weak fallback position following the court decision — that Mr. Ford would be humiliated. It is hard to see it that way, in the wake of Mr. Ford’s two convincing court victories. It is the left that has been humiliated.

Because of course, the porky Corky couldn't be more wrong. The Fordzilla was the one humiliated. He's eaten so much humble pie recently I'm surprised he's still standing. And it won't be long before he's back for another helping.

Ford has a week to go before his campaign finance audit is expected to come out. If he is found to have violated election laws, he could be removed. The question is: How many lives does Ford have left?

And as for the left, we're not dismayed, we're DELIGHTED.

Because we need Rob Ford to be our useful idiot buffoon... 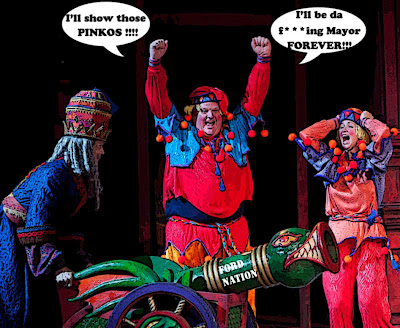 You see, if he had been removed by the courts he might have been able to portray himself as a victim of the "left-wing conspiracy" he's always babbling about. And won even more of the sympathy vote in the next election.

But leave him in office and he's sure to do himself even more damage. Shoot himself in each foot AND in both buttocks. Continue being the worse Mayor in the history of Toronto.

Until even his own supporters are tired of him.

There’s plenty of ammunition to use against Ford in 2014 — and it’s possible that even those who support his agenda may have tired of the man by then. Ford has always been his own worst enemy, and now has another two years to prove that. The left can afford to wait. If they can’t beat this guy, under anyone’s banner, when Toronto next goes to the polls, that’s a reflection on them, not Ford.

And in the process take Stephen Harper down with him.

Because Rob and Steve once had a hot thing going eh? 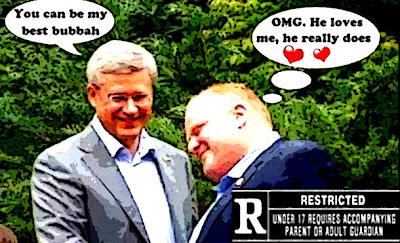 But which sadly only lasted until Great Romeo Leader realized that his chunky Friend With Benefits was a liability rather than an asset. His brother Doug was the real Mayor. And if there was still a Ford Nation, it was just a bunch of smelly Con rednecks. Most of whom live in their pyjamas.... in ALBERTA.

And here's the best part eh?

By the time most of those who actually live in Toronto are sick to death of Rob Ford, most Canadians will also be sick to death of Great Ugly Leader. The next election will be just around the corner, and Harper will need Ford like he needs a monkey on his back. 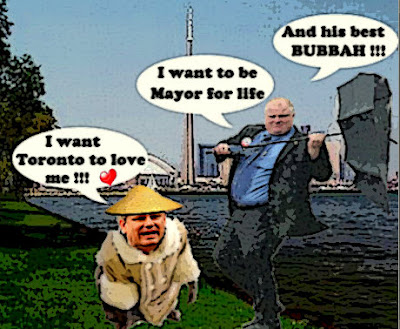 And after watching that tragi-comedy, comic-tragedy, Con animal act, most Canadians will probably decide it's time to get rid of ALL of them. Lock them up in a zoo, or send them straight to prison.

Golly. I do believe Corky might be right after all.  We DO deserve cushy front row seats !!!!!!

And lots of popcorn eh?

Show us where you're going.

Remind us what you can do...

You know, sometimes I think we aren't just going to defeat those hideous Cons.

We are going to destroy them...

Unless they cream you first. The new game is called watch Wynne crash and burn.

Sad times ahead for the left, sad sad times.

hi anonymous...Lordy. What parallel universe do you live in? Can't you see what direction history is flowing in? First Obama now Wynne, can't you see you're swimming upstream? Who do you think you are? A salmon?
The fact is you Cons are running out of history. You're a dying breed, like the dinosaurs of Alberta, and all we're doing is helping evolution speed up the extinction process...

Yes indeed Simon Nothing lasts forever The right has had nearly a 40 year run, their time is nearing an end. Those that care about living in a just society, one where everyone shares in the wealth will rule the next few decades. Sadly it will take that long simply to undo the damage.

Simon, please stop writing as if Cons all come from Alberta. As a left-leaning Alberta Queer, it is so tiresome to see all Albertans painted with the colour blue by bloggers that I generally agree with. Cons come from everywhere. Alberta didn't invent conservatism. And those of us who live in Alberta that are fighting against conservatism aren't helped by untrue generalizations.

LOL.....thanks for my morning laugh Simon. You are such a card. I've never been a fan of anything Toronto.

You took the words, right off my keyboard. The first thing that struck me is, how similar Ford and Harper are.

Harper has done so much damage to this country, it's permanent damage. How do we get Communist China, off our Canadian soil? Harper has given China the resources and the resource jobs. China refuses to pay Canadian wages, so China is permitted to bring their own cheap slave labor over here. All company's are permitted to hire cheap labor. China's minimum wage is, $236 per month. Harper's Omnibull Bill, gives Red China the right to sue, any Canadians blocking China's takeover of Canada. Harper is planning China, to take the resources in the High Arctic too.

CSIS even warned of, Red China's huge inroads into Canada. BC was specifically mentioned. Gordon Campbell who works for Harper, sold BC out to China long ago. We said, Harper is a snake in the grass, no-one would listen

Once a monster Dictator, such as Harper, cheats his way into power, they are damned near impossible to get rid of. We see what has happened in the Middle East, with evil Dictators. Same in the far East and, in some South American country's. People just don't get it? We have no rights either, we are dictated to.

You got to hand it to Ford for making
Mel Lastman look good!

hi Kev...it constantly amazes me that so many people can't seem to see the forest for the trees. They seem to draw their world view from what they can see from the opening of their ground hog burrow. We are clearly heading for a major ideological clash that will determine whether humanity survives or not, but don't tell those people because they don't know what you're talking about.
And yes it will probably take decades to repair the damage,but we owe it to those who will be born in five hundred years. I hope they at least are grateful... ;)

hi anonymous...I'm sorry if I offended you and other progressive people in Alberta, that was not my intention. And maybe I do generalize a bit when it comes to the people of your province so I'll definitely try to do batter. However, I do believe I'm innocent of that in this post. The Alberta dinosaurs I mentioned in the comment above are the the ones who died about a million years ago. And when I say that a lot of the support that Ford receives comes from the province of Alberta, I only say that after checking the profiles of people who write them in our newspapers.
I should also point out, for the benefit of others, that much of the hate mail I receive, which is considerable, comes from Alberta, and as long as I can remember people from your province have been attacking "The East". Also if Alberta wasn't such a one-party place, the Cons would not have such a stranglehold on power, so you can't really blame the rest of us from being bitter. And what's good for the goose etc etc. Still I take what you say to heart, and I will try to do better..

hi Way Way Up...I'm glad it made you laugh. Unlike many bloggers I try to make my posts as entertaining as possible, rather than lay down a flood of boring words like I was writing the Bible. I could have simply written its better to defeat Ford than remove him from office by other means, because he is best given more rope to hang himself, and take Harper down with him. But instead I spent more than two hours to try to make the point in a more entertaining manner. Only to awaken this morning and find that my companion, who I love dearly, had left me a note, in French, saying something like "You want Ford to remain in office? WTF?" so I just can't win. ;)
But as for Toronto, I know as a Montrealer it's heresy to say this, but the city has a lot of good qualities and people, and since all our cities are a reflection of who we are, people like Ford shouldn't be allowed to destroy it...

hi meadowlark...I didn't have time to explain that Rob Ford may be a buffoon, but his brother, the real Mayor, is surrounded by a gang of sinister Con operatives, and Harper is counting on him to try to break down the walls of what is still a progressive bastion. So although Rob may appear like a very bad comedy act, the stakes are enormous....

hi Torontonian...I know poor old Mel Lastman was also a buffoon, but the difference is that he at least loved Toronto, while Ford only cares about his power base in the suburbs. And in my book love can excuse a lot of things.... ;)

Simon, you must surely be a buffoon...