Stephen Harper and the Sounds of Resistance 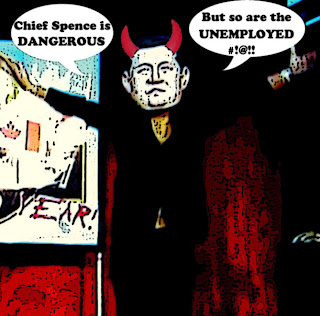 Well say what you like about Stephen Harper. Call him the Crime Minister or the devil himself.

But nobody can deny that he's consistent eh?

One moment he's waging a war of wills with a starving woman who represents some of the poorest people in Canada.

Or boasting about the eleven thousand government jobs he has killed.

The next moment he's waging war on the unemployed.

Beginning Sunday, people on EI face stricter, more complex rules for keeping their benefits, with the goal of getting unemployed workers back into the workforce sooner.

Even though that could cause mass misery all over the country, especially in Atlantic Canada.

The Atlantic premiers say the new rules could have a devastating effect on fishery, farming and tourism industries which are all seasonal jobs. And they're concerned that if people are encouraged to leave home to take other jobs, they won't come back.

For if the NDP asks how low did the Cons go in 2012? The answer is you ain't seen nothing yet.

And I just hope that Canadians understand that it's all ONE struggle.

That everything the Harper regime does is aimed at achieving the same thing. Killing government, scrapping environmental regulations, attacking unions, turning us into a low-wage economy, making Canada safe for Big Oil, and selling us out to foreign interests.

And that if the moment of truth has arrived for Canada's First Nations.

No one in Canada knows better than its aboriginals that a moment of truth has arrived for both them and the land. For good or ill, an explosion of development quivers over the West and the Arctic. Huge fortunes will be made by a few, great change will be ushered in, and the environment will be altered forever. Either the aboriginals make their stand now, or they will be eternally bypassed.

The plain fact of the matter is that aboriginal anger builds slowly underground before the volcano of frustration erupts. These are patient — not docile — people.

It has also arrived for the rest of us. For unless we speak out now as loudly as the Idle No More movement is doing, we too will wake up in a country we don't recognize. A country with poisoned lakes and rivers. A country run by foreigners that looks like a jungle.

Oh sure. I know a lot of Canadians can't relate to the struggle of our First Nations. But they will, they will.

For the revolt against the Con regime has begun. Fate has determined that the Idle No More movement should lead the way.

And until the rest of us hit the streets with our banners and our drums.

These are the glorious sounds of the great Canadian resistance...

The students and their supporters ousted Jean Charest and the Liberals and the new government reversed the planned tuition fee hikes.

As for Occupy, since that movement, the press finally discovered the words "income inequality". After so many years of radio silence, we were finally treated to articles, features and opinion pieces about the massive discrepancies between the very wealthy and the rest of society. This important economic topic had been basically ignored for more than 2 decades.

hi anonymous...yes it's true, I supported the Occupy movement, and the Quebec students, and now the Idle No More rising. I'm an idealist, I believe in a better, fairer world, so what can I say eh? Except that the Occupy movement helped transform how people think about our existing economic system, the students got what they wanted, and helped bring down a government. As well as almost single handedly bring down Jean Charest himself. So I'm extremely satisfied, all is proceeding according to our master plan. And I think the Idle No More movement's effect on this country could be truly momentous...

Haha. Nice try. Now the PQ has cut education funding, where are the students now? As for free education, guess they gave that one up too eh? Occupy was going to change the world, but alas they vanished quicker than a cheque made out Cheat Spence.