Idle No More and the Great Confusion 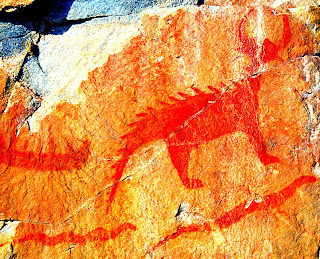 Well I think it's safe to say that it was quite a day in my home and native's land eh?

As if the great Ojibwa Mishipeshu of Lake Superior was thrashing its tail around and causing a great confusion.

And I must admit I was a bit depressed to see the enemies of the Idle No More movement rush in to try to take advantage of the situation, by playing up divisions. Or rewriting history.

If she’d set out to deliberately provide ordinary Canadians with a glimpse of why successive governments have found it so difficult to deal with the very real problems facing Canada’s aboriginals, she couldn’t have done a better job. There is no reason on earth for the Governor General to attend a meeting at which public policy is to be discussed.

When in fact the Governor General represents the Crown, that Stephen Harper loves so much, which negotiated the original treaties, that Harper is now breaking. And Chief Spence and others have every right to demand that David Johnston be there.

If only to remind Canadians that this is a country of NATIONS. And that all deserve RESPECT.

As I see it Johnston doesn't have to take part in the discussions. But he should be there, presiding over the event, or just sitting silently on his throne.

I can even provide him with a nifty crown if he wants... 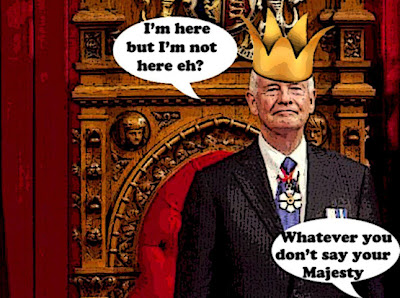 But he should be there because it's a mark of respect, symbols are important in a country still defining itself. And since 99.99999 per cent of the GG's job is symbolic, what is the bloody problem?

It all seems so small minded to me. Just another example of Canadians acting so much smaller than the big beautiful country we live in. Another massive failure of the imagination.

And then I read the flood of racist comments from the depraved bigots of this country and I was even more depressed.

Until I remembered that the Mishipeshu of Lake Superior is said to have been traced by the great Chief Shingwaukonce when he led a revolt against a group of miners who were plundering copper from the land.

And I thought that was a really good omen eh? Since the Harper Cons have now been definitively exposed as plundering the land in the name of Big Oil.

A letter obtained by Greenpeace through access to information laws and passed on to the CBC reveals the oil and gas industry was granted its request that the federal government change a series of environmental laws to advance "both economic growth and environmental performance." Within 10 months of the request, the industry had almost everything it wanted.

A new generation of warriors is now revolting. 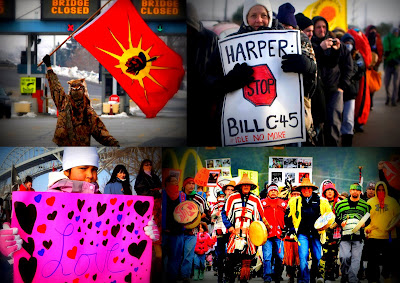 And if there is confusion out there, it's just the confusion of change, which is a wild and  wonderful thing. For have you ever seen a time when the just cause of our aboriginal brothers and sisters has received so much attention, and triggered so much discussion?

I haven't and I love it.

Tell the boring old white farts who rule this country to get an imagination, or get lost.

Tell the ghastly bigots to go jump in Lake Superior, preferably when the Mishipeshu is hungry eh?

The struggle is just beginning, but we might yet save this country. By finally understanding it.

Idle No More forever. Down with the Con regime.

Here comes the next generation...

UPDATE: Governor General agrees to ceremonial meeting. Good.  A tiny step in the right direction. First Nations still teaching us how to be real Canadians.

Rise! Arise!
Wake ye Arise
Mother Earth God
She is calling you
She is greeting you

If the GG's position is so symbolic (as the right keeps harping in the regard) then it shouldn't be a problem for him to attend. In fact, since symbolism plays such an important part in such meetings, it is a real insult for the GG to refuse to be there.

Yes Simon it's a great misfortune that the Conjobs arouse the bigotry and senseless hate in thier usually snoozing acolytes, but really, are any of us who support the Free First Nation's rights all that surprised?
Once again, Greenpeace has done us a favour by playing the Wikileaks card and publicizing the truly hateful reason for all this misery..Big Oil collecting on their political donations and support of the Conjobs...but I feel as if all this was necessary to once and for all expose these creeps and liars for what (and who) they truly represent...the only truth that Harpo ever told is that we wouldn't recognize Canada when he was done with it..let's make sure that his wishes never come true

Harper declared himself a devout Christian, during his x-mas interview. Harper was Policy Chief of his, Northern Foundation Party from 1989. He was linked with Christian Fundamentalists among other links. There was an article in the Tyee, March 2012. Understanding Harper's Evangelical Mission.

Harper's omnibull bill, gave Communist China permission to sue any Canadians in their way. China sued in BC to take the mining jobs. If F.N. block the Enbridge pipeline, China will sue.

Harper's favorite charity is, big oil. He gives billions of our tax dollars to huge wealthy corporations. Harper also gives them huge tax reductions. This was seen on the House of Commons TV channel, some time back. Harper of course now, does his dastardly deeds behind closed doors.

Chief Spence is right not to trust, nor believe Harper's motives. Harper is a snake in the grass. He has no morals nor ethics, what-so-ever. Harper doesn't have a decent Christian bone, in his entire body. Chief Spence is up against a monster. She is doing this for all of us, detesting Harper the monster. However, her health can be destroyed for the rest of her life. That is a terrible price to pay.

hi Oemissions... yes this would be the time for the Mother Earth God to make her presence known. Although I feel her spirit is already upon us, for have you ever seen such a wonderful uprising?
I shall personally be asking Mother Earth for an almighty tornado, to blow the Cons all the way back to Alberta... :0

hi kirby...I completely agree with you. If we must be saddled with the monarchy let's make it work for us. I personally know David Johnston to be a good guy, but he must be made to understand that he has an important symbolic role to play, for if he doesn't he will surely regret it later...

hi lefty...I supposed I shouldn't be surprised, but funnily enough I thought Harper might just rise to the occasion for the first time in his life. And I never could have imagined that it would cause such an eruption of hideous racism. I must admit that it has deeply troubled me, and made me wonder if this country is coming apart at the seams. But of course I do know who to blame, and believe me I'm even more motivated now to work for the total destruction of the Con regime...

hi anonymous...Harper can call himself a Christian, but as I've said before I'm more of a Christian than he is, and I'm an atheist.
And if I'm wrong and I do end up in hell, I shall be greatly consoled by the thought that Harper will be there with me. So I can let him know what I think of him for all eternity... :)