Stephen Harper and the Lincoln Complex 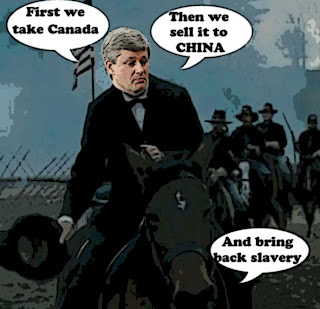 OK. I hope you're sitting down eh? Because I wasn't when I heard the news, and I practically collapsed.

So great was my shock, and my outrage.

For it seems that Great Ugly Leader has stopped comparing himself to Stalin, or Napoleon.

Before Christmas, Prime Minister Stephen Harper took along a large number of Conservative caucus members to see Steven Spielberg’s Lincoln, now nominated for 12 Academy Awards. Afterward, there apparently was a discussion about the film, led by Mr. Harper.

So why would Mr. Harper want his group to see this film? It couldn’t have been about how to fight a war or the perils of secession. No, more likely, the central message the Prime Minister wanted his team to appreciate was: We stick together, especially in adversity. Unity at all costs must be our abiding purpose, especially in tough times.

And after I had recovered, and stopped laughing, all I could think of was how dare that ghastly little man compare himself to a truly great leader like Lincoln? The noble giant who held a country together and fought slavery.

When as the Prime Minister who has done more to fracture and divide Canada. And the man who once tried to build a firewall around Alberta, he is best compared to the separatist leader Robert E. Lee... 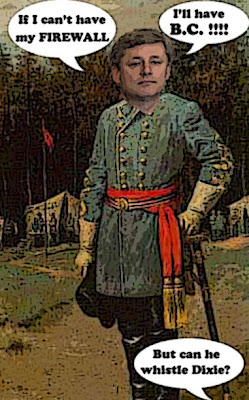 And best described as the leader of the Big Oil Confederacy, who would impose its hideous tar plantation values on the rest of us, and make us the SLAVES of foreign interests.

And is apparently so determined to force his Chinese pipeline upon the loyal citizens of British Columbia, he has commanded his Calgary Cowboy Brigade to try to buy its Premier.

The B.C. Liberal Party is getting a boost from what seems a rather unlikely group — Calgary's top political and business leaders.

Or turn her into his Scarlett O'Hara... 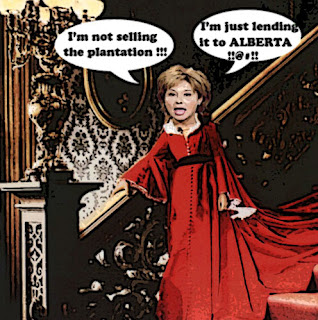 And speaking of shameless... how dare Harper compare himself to Honest Abe? When he runs the most corrupt government in Canadian history. And his redneck rebels are living it up in the Big House like bandidos and goombas.

Holy Confederacy of Dunces. Is that outrageous, or is it MADNESS?

Right. That's what I thought.

Because when a man like Stephen Harper starts lecturing his dumb caucus about strong leaders and civil wars, based on a movie he's just seen, in a country on the verge of an all-out revolt against his Con regime, you know we're heading for a really bad place.

For he may not be a giant like Lincoln. He may be a very small man.

He may be heading for his Gettysburg.

But he has never been more desperate or DANGEROUS...

And this has never been more true: The sooner we unite to defeat him and his Big Oil Confederacy.

The more Canadian we will remain.

And the safer we will be...

You really are a desperate deluded little fucker aren't you Simon?

hi anonymous...What I don't understand is why you keep coming back for more night after night when clearly what I write makes your head explode. Huh? Answer me that one. Even for the nickel the PMO gives you to write a comment it does seem somewhat excessive.
But I want you to know that I checked with my lawyer, and he says you can't sue me if you have a stroke. Whew. So please feel free to have one... :)

I think the best way to consider PM Shit Head is as the ugliest blend of Conquistador with overtones of Napoleon & Hitler. I suppose could see some of Custer in him as well.

Time will be the the only one that tells if Harper gets what he deserves. Hopefully it happens to be a stint in one of the jails that he helped shutter. On the other hand, could always exile him permanently while we take over the US gently state by state.

I know Harper claims to be a westerner, though I'm calling him an Albertan of convenience for his love of oil & money. Not hard to believe when his so called belief in the almighty seems to be a spin on Mammon.

With each passing day the little imperator shows more of his looming mental imbalance.

After KXL gets deferred again and Northern Gateway explodes on the launch pad, the power brokers at Esso will recall their Manchurian candidate and all of Canada will finally come out from under the darkness of this evil 'desperate, deluded little fucker' pestilence.

1. I think you are a sad deluded little man and some one needs to remind you of that.

2. Your blog is my daily late night laugh.

Lincoln, for whatever reason, had the Emancipation Proclamation to his name.

What does harper have?

Tearing up the Kyoto and Kelowna Accords.

Some raped teenage boys in Afghanistan.

Some gazebos in Muskoka.

The tar sands and all the environmental damage that goes with it.

And a few people dead from eating tainted meat.

There could be more but ... oh yeah, ... being found in contempt of Parliament.

A vile man. A hero for shit-heads.

Gee Simon!! Don't be so cruel to Stevie. Stevie's x-mas interview, he declared himself a devout Christian. Harper said, he prays everyday for guidance. Er....Perhaps he meant "prey's" everyday, on the Canadian people?

Harper was Policy Chief for his, Northern Foundation Party of 1989. Harper was linked with, Christian Fundamentalists, among other dubious links.

Did anyone read? Harper gave a speech in New York, at the Council of Foreign Relations? This was Sept 25/2007.

Then Harper made a speech regarding, Global Governance for Canada.

Now Harper is giving Canada to Communist China. Harper's bizarre omnibull bill, gives Red China the right, to sue any Canadians, getting in China's way. China sued in BC, to take the mining jobs.

In BC we are supporting the F.N. people, to protect their food sources against the Enbridge pipeline. BC is no traitor to Canada. We want nothing to do with Communist China, what-so-ever.

Lincoln has a legacy that lives to this day.

What about Harper? What's his legacy?
After more than 6 years, it's still doodleysquat.

hi anonymous 6:33...I don't know why my designated Con troll is the way he is, but he clearly has a problem. I try to polite to those who comment here, but he tests my patience...

hi anonymous 11:21... (1) I'm a sad and deluded little man? And I need YOU to remind me of that? Good lord man get a grip on yourself you're almost as crazy as your scummy leader.

(2) My blog is your late night laugh? Oh goody, I hope it doesn't give you nightmares. Woooooooh.

hi bahamut...Yes I do believe he is trying to play Custer. I can almost see him charging at chief Spence on a burro backwards. Will somebody please tell him how that story ended.
And of course Harper is no westerner, unless you call the boring suburb of Etobicoke, West Toronto.
But yes he is a Mammonite, and it will be his downfall... ;)

hi Ron...Thank you. I'm surprised more people didn't find the idea of Harper leading his redneck caucus in a discussion on a movie, any movie, rather bizarre. I do believe he is on the edge of a mental breakdown, and I hope for the good of Canada, we can all help push him over the edge... ;)

hi thwap...Exactly, Lincoln was a giant, an amazing complex man who makes Harper look like a leprechaun. I can't believe that Jeffrey Simpson could dismiss his megalomania so easily, and make his Con Skool sound so normal. Can you imagine someone like Dean Del Mastro sitting through that lecture? I can't. I wish I could have been a fly on the wall for that one, because it must have been hilarious.
Although, as I did point out in the post, all of this also makes him dangerous...

hi Gloria...how could you accuse me of being cruel to Stevie. When all I'm trying to do is stop from hurting himself and others. As you may know, the first Harper in Canada, Christopher Harper, had to be forcefully removed from office for "vindictive and oppressive measures beyond all reason." And I fear this Harper is heading in the same direction... :)

hi Torontonian...the story of Abraham Lincoln is an inspiring one, and he is one of history's great leaders. But as you point out Harper leaves no legacy, except the ruins of what was once Canada. But then again he's always been that way. How many people do you know who would try to destroy his student council in high school AND in university. The man takes more pleasure in destroying things
than he does in building them, and his legacy will be a small but shameful one...